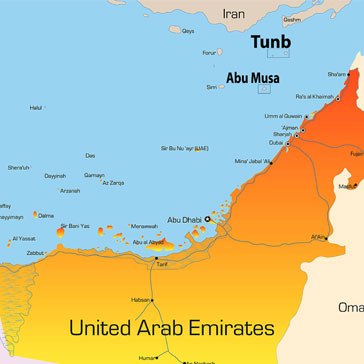 A recent YouGov/Al Aan poll of 2066 Arab respondents, across the MENA region, conducted between 26 April & 6 May 2012, examines the view of Arabs on the Abu Musa & Tunb island dispute.

The dispute between and the UAE and Iran over the sovereignty of Abu Musa & two neighboring islands (the Greater and Lesser Tunb) continues to linger in the International Court of Justice, after three decades without resolution.

Even in North Africa & Egypt, where feelings towards Iran due to distance & less historical conflicts tend to be warmer than in the GCC and Levant countries, 50% of respondents believe the islands belong to the UAE & only 6 % believe they are rightfully Iran’s.

Iran took control of the islands in 1971, the day after British forces left the region. Tehran maintains that an agreement between the Shah and the then ruler of the British Trucial Sheikhdom, Sharjah, gives it the right to administer Abu Musa and station troops there. However the UAE insists that Iran has breached the terms of its hastily brokered agreement with Sharjah  by expelling Sharjah residents in 1992 & the continuing buildup of a large military force and the construction of naval facilities (whilst neither Iran nor Sharjah revoked sovereignty, they did agree to oil revenue sharing and the stationing of some Iranian troops).  No agreement between the emirate of Ras-al-Khaimah & Iran over the Tunb islands was reached & as such, Iran occupied them by force, days before the six Trucial Sheikhdoms of  Sharjah, Ajman, Dubai, Abu-Dhabi & Fujairah united and declared independence from Britain, also in 1971 (Ras-al-Khaimah was to formally join in 1972). The apathy of the British and US to this invasion can be in part, attributed to Iran's strategic importance to the US at that time

The April visit of Iran’s President Mahmoud Ahmadinejad, the first of any Iranian president, to Abu Musa, reignited tensions in one of the Gulf regions longest standing disputes. As well as drawing condemnation from the UAE and the Arab Group at the United Nations, the visit was described as “unfortunate” by the UK Foreign Office who felt  Ahmadinejad’s actions  “only serve to make matters worse”, whilst complimenting the UAE on its “measured approach” to the dispute.

The UAE claimed that the visit “is a flagrant violation of the United Arab Emirates’ sovereignty over its territory and a transgression of efforts to find a peaceful settlement to end Iranian occupation of the three UAE islands".

As a result of the visit, the UAE recalled its ambassador to Iran and the UAE Minister of State for Foreign Affairs, Dr Anwar Mohammed Gargash, called on Iran to enter into negotiations & reiterated the UAE’s claim of sovereignty to the islands is “based on realistic and tangible historic evidence”, continuing “the UAE stands ready to risk its historic and legal facts and win or lose at the International Court of Justice”.

The hardline stance of Iran and refusal to let the International Court of Justice arbitrate on the matter can be attributed to a number of factors. Abu Musa is located half way between the UAE and Iran in the Strait of Homuz, at the mouth of the Arabian Gulf and sits on reputedly large oil reserves. As well as oil, this strategic position could allow a country to influence or even block the Gulf's valuable shipping lane, through which passes approximately 35% of the world’s seaborne traded oil. Its strategic position could allow Iran to restrict supplies to consumers in Asia, Europe, US and Japan.

Some analysts speculate the refusal of Iran to negotiate the sovereignty of Abu Musa is due to the fact that the island’s position gives Iran closer proximity to potentially launch military action against US naval bases in Bahrain and even attack other GCC countries.

Perhaps unsurprisingly, given respondents fear of the motives of the Persian state over half (57%) of believe that it is important for the dispute over the islands to be resolved.

This survey was conducted using YouGov’s proprietary online panel & results are representative of the urban Arab adult population in the Middle East and North Africa region. Results are based on the following distribution of a sample of 2066 Arab respondents: