Nearly six in ten of Americans say the U.S. should stay out of the conflict in Syria and 54% say the U.S. has no responsibility to intervene around the globe

Secretary of State John Kerry called the use of chemical weapons by the government of Syria “undeniable” and “abhorrent.” Secretary of Defense Chuck Hagel says the American military is in place and ready to launch an attack on Syria when and if asked. However, Americans continue to want the country to avoid additional involvement in the Middle East: a new poll for YouGov America finds most respondents wanting the country to simply stay out of Syria.

Americans disapprove of the March decision to send weapons to the Syrian rebels and few want any U.S. military action there – or agree that the U.S. has any international responsibility to help.

As it did two months ago, the public rejects the argument that the United States has a responsibility to do anything about the fighting in Syria, and rejects it by margins similar to how it felt then. Now, perhaps in the wake of the long involvements in Iraq and Afghanistan, Americans are also rejecting the claim that the United States has any role to play militarily in trouble spots around the world. 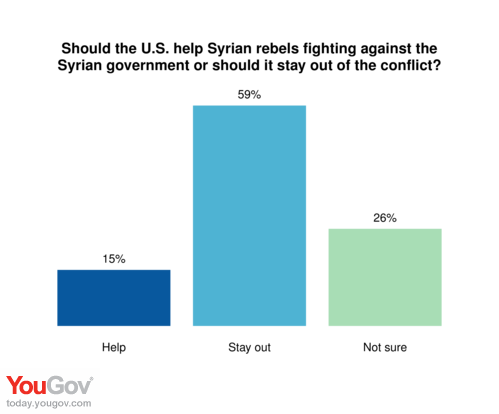 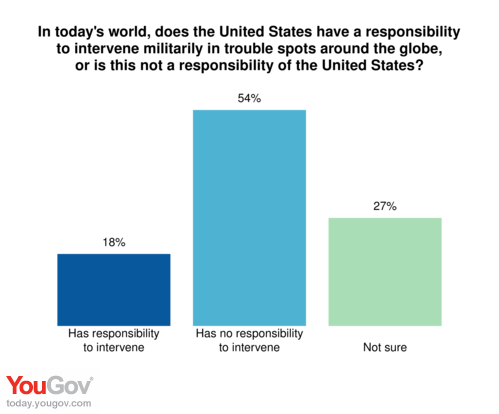 Neither Republicans nor Democrats think the U.S. has such a responsibility.

This is a major difference from public opinion at the time the Iraq War began. In 2003, a CBS News Poll found support for intervention at 54%; just 34% wanted the United States to stay out. Even in the early 1990s, four in ten favored U.S. military interventions.

The lack of support for military options comes after the long U.S. involvements in Iraq and Afghanistan. Yet it also comes after accusations of the use of chemical weapons by the Syrian government on a village in the country. Eight in ten Americans have heard of the accusation, but there is some confusion over what exactly happened. 55% say it is definite or probable that the Syrian government used chemical weapons, but 21% say it is likely the rebels used those weapons. Many simply do not know.

The United Nations has suffered politically among many Americans, especially among Republicans. By more than two to one, Republicans say they do not trust the United Nations to conduct an impartial investigation of the use of chemical weapons. In recent years, polls have found more Americans believing the U.N. has done a poor job than say it has done a good job in its work. The same is true in this poll: 18% say the U.N. has done a good job trying to solve the problems it has had to face, while nearly half think it has done a poor job. 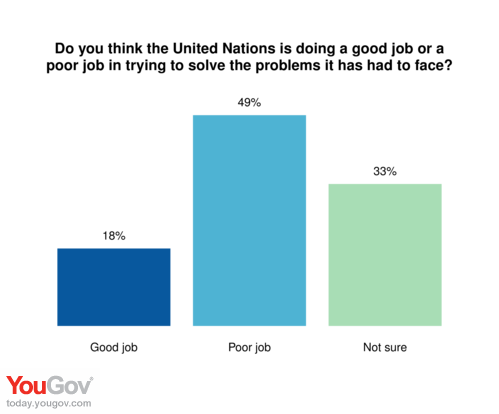 Democrats are evenly divided when they assess the U.N.; by 64% to 9%, Republicans say it has done a poor job.

Still, the U.N. scores better than the United States when Americans are asked whom they would trust to investigate and accurately report on the use of chemical weapons in Syria. 26% choose the U.N., 12% the U.S. Many are not sure who, if anyone, to trust on this.

Despite the chemical attacks, there is little support for even international action to assist in Syria. Only one in ten would send troops; less than half would support actions with much lower possible human costs: humanitarian aid, assistance in evacuating refugees, and implementing sanctions against Syria. One in four would have the international community do nothing. 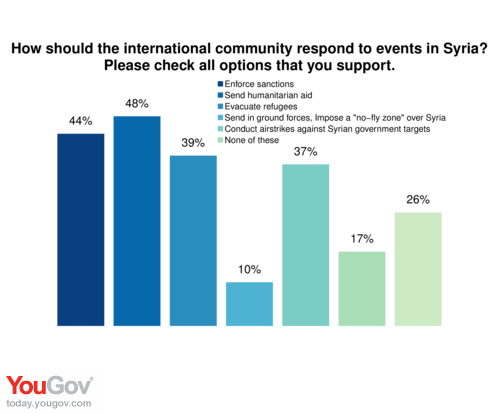 Of course, this puts the President in a difficult position. His earlier action, authorising the sending of weapons to help the rebels, met with disapproval in June and still does. Just 30% approve of the action, while 45% disapprove, little different from responses in June. Even 27% of Democrats disapprove.

Consequently, more disapprove than approve of the President’s handling of the overall situation in Syria. 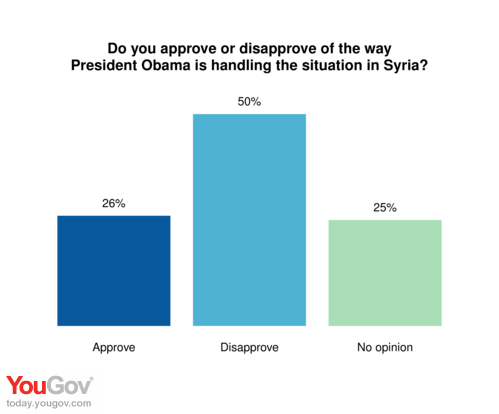