More than half of UAE nationals feel that the UK is an unsafe destination in the wake of two vicious attacks on Emirati visitors to London, a YouGov / Al Arabiya News survey has found.

The results present a striking shift in Emirati perceptions of the British capital, which in recent years had welcomed a surge of tourists from the Gulf, with more than 50,000 Emiratis visiting the UK annually.

Last week, a seven-member gang attacked an Emirati man and his wife in their London apartment, less than three weeks after three Emirati women were assaulted with a hammer in their hotel apartment at the Cumberland Hotel in central London.

The YouGov poll conducted for Al Arabiya News surveyed 1,154 people and found that more than a third of UAE nationals are now unlikely to visit the UK for their next holiday, while 31 percent of Arab expats residing in the UAE also said they were unlikely to visit.

Click on the infographic below to view a larger version of the full results. 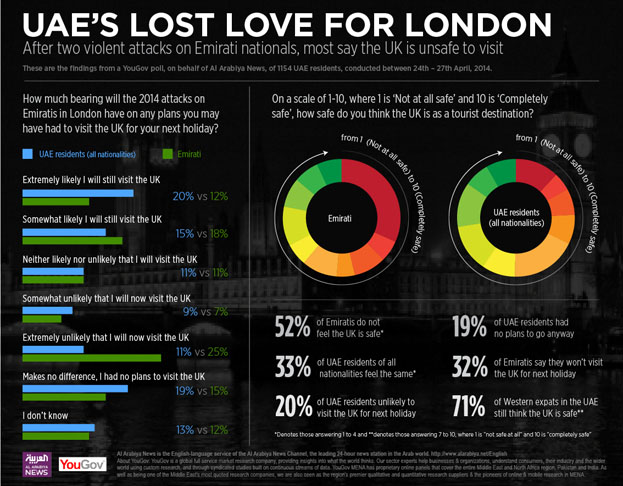 Join YouGov today! Your views can shape the news…
share