Firstly, we'd like to wish everyone Eid Mubarak 2014! We'd also like to take this opportunity to reveal some of the latest Ramadan consumer insights from our online panellists across the MENA region. 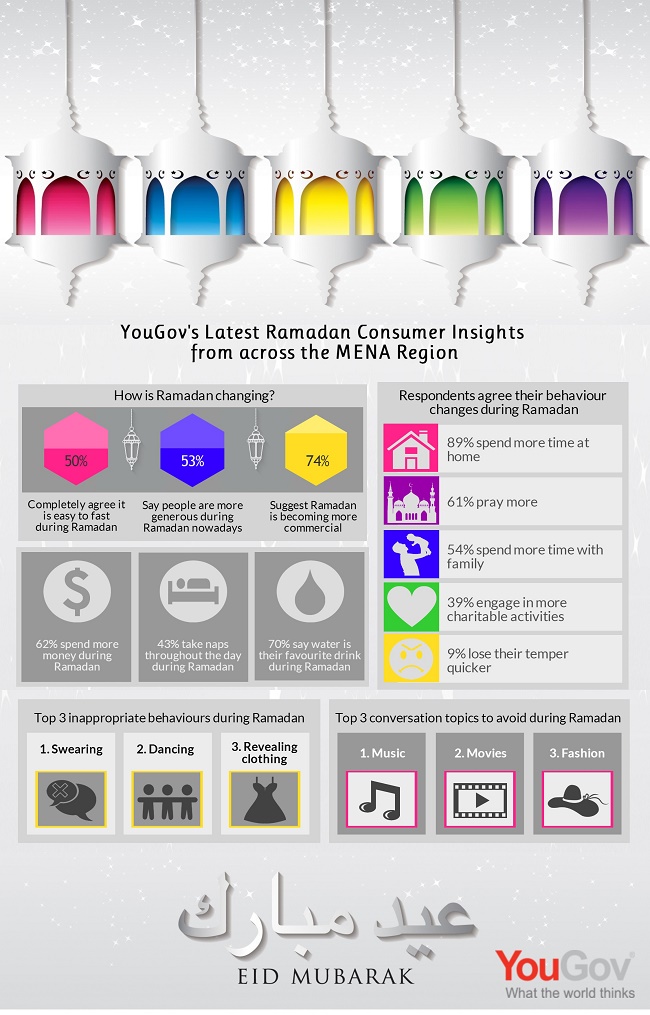 The survey, conducted using our Omnibus online research service, recorded over half of the online respondents surveyed across the region said they only make essential shopping trips for items they really need during Ramadan, and 15% said they don’t shop at all. In addition, when asked, a significant 57% said 'increased prices' were one of the negative aspects of Ramadan in MENA.

When looking more closely at eating and drinking habits during Ramadan, of the 9 in 10 Muslim respondents who said they fast during Ramadan, half still feel ‘it is easy to fast’.

Dates are very much still the favourable way to break fast, with 68% of respondents choosing the traditional palm fruit – compared to 56% who chose it in 2013. An overriding majority (82%) also said they prefer to break their fast at home with their family.

It appears online respondents are divided when it comes to meal sizes during Ramadan. When asked about their types of eating habits, the largest proportion (42%) said they prefer to eat a light meal/snack at Iftar time only. However, eating only a big meal at Iftar, or eating light snacks at Iftar followed by a big meal later for dinner, are equally as popular – each represented by 22% of respondents.

As for MENA’s drink of choice during Ramadan, water is the most favoured beverage (chosen by 70% of respondents), followed by juice (61%), coffee (25%) and tea (24%). Fizzy drinks and energy drinks were the least popular amongst residents chosen by only 8% and 2% of respondents respectively.

When asked to what extent their personality or lifestyle changes during Ramadan, the proportion of online respondents who said their behaviour changes completely has reduced slightly, from a third in 2013 (33%), to a quarter (26%) in 2014.

Four out of five online respondents said their behaviour changes at least a little during the Holy month (similar to 2013). Almost two thirds (61%) said they pray more and half of the online sample (54%) agreed they spend more time with family during Ramadan.

Unsurprisingly, the most popular topics of conversation during the Holy month center around religion (60%), with music and movies being the topics avoided the most amongst Muslim respondents.

When asked which activities are inappropriate during fasting hours, as expected, listening to music (61%) and dancing (64%) were among the most frowned upon by Muslims. The highest percentage (68%) of online respondents said swearing was the most inappropriate activity when fasting.

The majority of respondents (60%) expressed over-eating is a negative aspect of Ramadan in 2014. Although a clear majority (81%) said the reflective occasion is a good time for people to get healthy and 70% see it as an opportunity to lose weight, when asked, over half of respondents said they don’t partake in any sporting activity during Ramadan.

It appears bad driving has marginally reduced in 2014 (35%) compared to the previous year when 40% chose it as a negative aspect of Ramadan.

When considering how Ramadan is changing in 2014, 7 in 10 said the Holy month is becoming more important and slightly over half (53%) suggested people are more generous during Ramadan now than they were in the past. Encouragingly, two in five (39%) said they engage in more charitable activities during Ramadan.

On the other hand, 64% of online respondents agreed that the spiritual meaning of Ramadan has been lost and three quarters (74%) felt Ramadan is becoming more commercial.

YouGov surveyed 1,566 Muslim respondents from our online panel in MENA between 1-8 July 2014.