Still not sure what to do on New Year’s Eve?  Latest YouGov survey finds almost 40% of people in MENA make their New Year’s Eve plans on the day.

New Year's Eve, the last day of the year according to the Gregorian calendar, is on December 31. In many countries it’s celebrated with a special evening where people visit friends, dine or watch fireworks. To mark the end of 2014 YouGov’s Omnibus surveyed 632 respondents across MENA to understand perceptions of New Year and what people have planned across the region.

The key question for people celebrating New Year’s Eve across the globe will be whether to go out, or stay at home. Thinking about this year the largest proportion plan to stay in (40%) vs. 30% planning to go out. 30% are still undecided as to whether they will go out or stay in.

Of the 600 plus MENA residents surveyed, 30% say they plan to go out.  Of these online respondents, 58% plan to travel to another city to celebrate.  Popular activities for those who plan to  go out include watching fireworks (37%), going to a restaurant for dinner (35%) or visiting a friend or family’s house (31%).  On average, those going out will spend 500 AED, versus those who plan to stay in who will spend 197 AED.

Whatever you are doing this New Year’s Eve – YouGov wishes you a fantastic 2015! 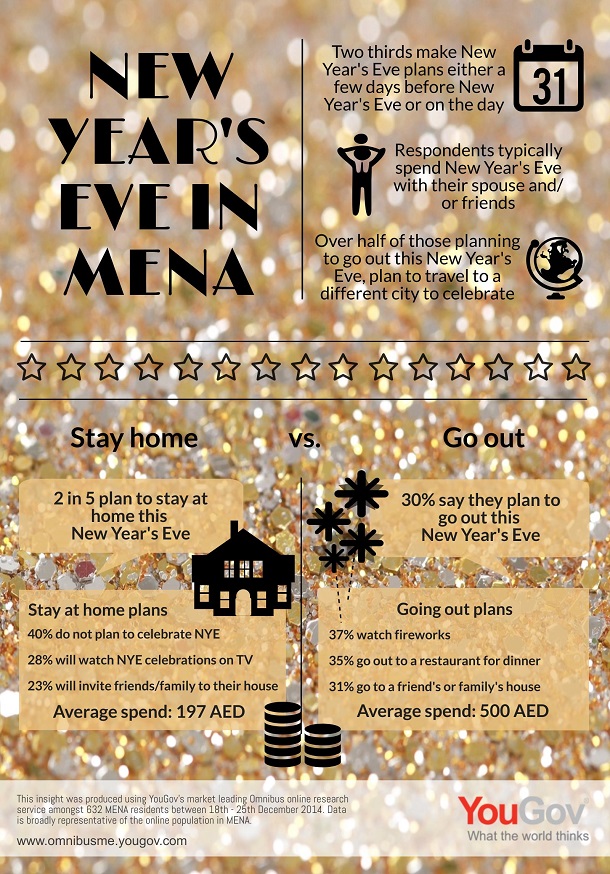