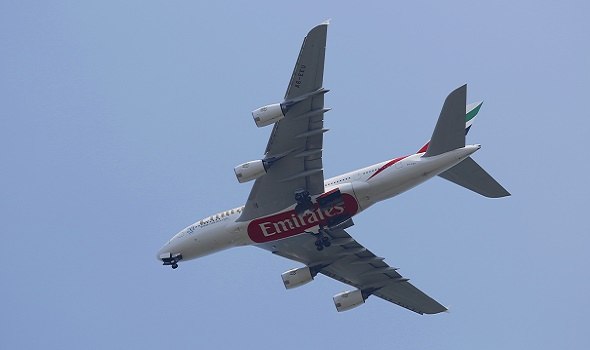 Emirates is the UAE’s most positively perceived home-grown brand in 2014, followed by Dubai Mall and Emaar, according to YouGov’s first ever Home-Grown Annual BrandIndex Rankings.

The new Rankings, which exclusively focus on brands born out of the United Arab Emirates, showcase the top 10 brands with the highest Buzz scores over the last 12 months, tracked by YouGov’s flagship brand tracker, BrandIndex. 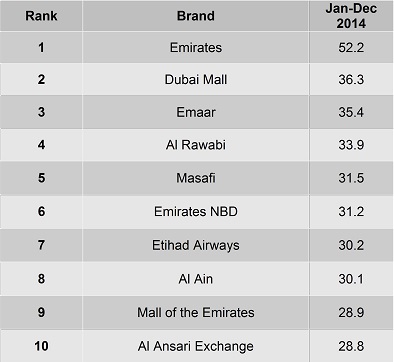 BrandIndex tracks over 400 brands across multiple sectors in the UAE, and is the first and only daily measure of brand perception among the public in the Middle East. Rankings are created using BrandIndex’s Buzz score, which is calculated by asking respondents whether they have ‘heard anything positive or negative about a brand in the last two weeks, through advertising, news or word-of-mouth.’

Airlines, major attractions, FMCG and real estate brands take up many of the top 10 positions and resonate most positively amongst UAE residents in 2014. Emirates, which generated the highest levels of Buzz for itself with a score of 52.2, formed a number of new partnerships in the last 12 months with leading entertainment names including Arab Idol, the Australian Open and the FIFA World Cup. The brand also ranks second in our Global Annual BrandIndex Rankings in the UAE.

The UAE’s most checked-in location on Facebook in 2014, Dubai Mall, made waves last year with the introduction of King Croc, one of the largest crocodiles in the world. Being the world’s most-visited destination (as announced in January 2014), Dubai Mall - a relatively new brand in comparison to the other featured home-grown brands - is in second position with a score of 36.3 on the positive sentiment radar.

The UAE’s largest property developer, Emaar, announced a string of new developments in quick succession during 2014, and closed the year hosting the world’s most watched New Years’ Eve spectacle in Downtown Dubai. As a result, the brand sits marginally behind Dubai Mall with a score of 35.4.

The Nation’s favourite dairy brand, Al Rawabi, has grown to become a staple part of the average diet within UAE homes, consistently maintaining a third of local market share.  Al Rawabi was the first dairy producer in the UAE to pack fresh milk in plastic bottles, and the first company to introduce 100% natural and fresh orange juice. The brand sits in fourth position with a score of 33.9.

Entering the Home-Grown Annual BrandIndex Rankings in fifth place is Masafi, the brand of choice for water in the UAE. Established in 1976, Masafi has been at the top of the UAE water market for three decades.  As well as featuring in the top 10 home-grown Buzz brands, it is also the top water brand in the 2014 Global Annual BrandIndex Rankings, scoring 31.5 in 2014.

Emirates NBD is one of the most valued financial services providers in the Middle East, with high Buzz scores to match. Scoring 31.2, not only does it hold sixth position in the top 10 Home-Grown Rankings, it is also the top brand in the Banking category for the Annual Global BrandIndex Rankings in 2014.

Etihad Airways’ brand Buzz also scores highly, placing it in seventh position over the course of 2014 according to BrandIndex. The national but younger airline of the UAE is amongst the fastest-growing airlines in the world, and the last 12 months saw them unveil a number of innovations which increased their Buzz score to 30.2. Positive coverage around the Arabian Travel Market had a particularly strong impact on this score.

At number eight is Al Ain, the largest vertically integrated dairy producer in the UAE. With a score of 30.1, this leading brand still upholds its traditions and values by being close to its consumers; this closeness no doubt helped it reach the top 10 Home-grown Brand Rankings in 2014

In ninth place with a score of 28.9 is Mall of the Emirates, which currently features more than 560 international brands. The compelling family leisure mall includes many brands that score highly in YouGov’s BrandIndex Buzz Rankings, including Magic Planet, VOX Cinemas, and the world-renowned Ski Dubai - the Middle East’s first indoor ski resort and snow park.

Completing the UAE’s top 10 Home-Grown Annual BrandIndex Rankings for 2014 is Al Ansari Exchange. In line with the philanthropic spirit of the UAE’s leadership, in 2014, Al Ansari boosted its brand image through its pledge to support UAE government humanitarian initiatives including UAE Water Aid and the Show Compassion campaign.

The DTCM and Emirates’ announcement of a $20 million dollar ‘See you in Dubai’ campaign to attract more tourists to Dubai only reinforces the UAE’s commitment to promoting itself as a destination of choice. BrandIndex will be tracking the region’s home-grown brands carefully to see which can achieve the biggest cut through to create the highest levels of positive sentiment amongst consumers in the coming months.

Want to know how your brand performed in 2014?

BrandIndex tracks over 400 brands in the UAE. We could be tracking your brand already with over five years' historical data on most brands.

Request a BrandIndex Demonstration to find out more »