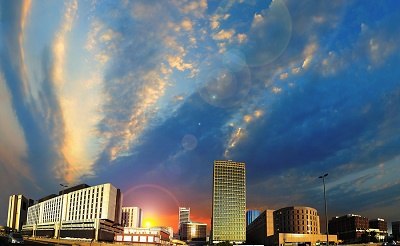 The majority of Saudi Arabians believe that real estate rates in Jeddah will not only hold value, but keep going up at least for the next two years, according to a new survey conducted by YouGov in March 2015.

Click on the infographic
to view the full insights

The survey, commissioned by National Exhibitions Company, the company that organizes the upcoming Cityscape Jeddah, Jeddah Urban Development and Real Estate Investment Event, discovered that 58% of respondents expect real estate values to remain constant or increase over the coming two years. 36% of respondents stated that the proposed transport infrastructure improvements in the western region would push prices higher.

The findings also revealed that 26% of the respondents consider hospitals to be among the biggest requirements in Jeddah. “This survey solidifies confidence in the Red Sea city’s real estate market." said Dr. Abdullah bin Mahfouz, Chairman of the National Exhibitions Company. “Homeowners and investors can feel safe investing in a city where demand is never in danger of waning. Also, given that the Kingdom’s prosperity has created a rising middle class, it is not surprising that 61% of Jeddah residents or 41% of young Saudis believe that developing affordable middle class housing is a priority for Jeddah.”

34% of the respondents came from Riyadh, 31% from Jeddah and the remaining 35% distributed among Dammam, Khobar, Makkah, Madinah, Abha, Tabuk and Taif. The sample consisted of 64% males and 36% females, 41% mainly between 25 to 34 years old, of which 48% are married with children.

Mo Alam, YouGov Managing Director - Saudi Arabia commented, “Our findings highlight that the citizens of Saudi Arabia require infrastructure to support a community and not just the provision of housing stock. Hospitals, schools, supermarkets and recreation facilities will all need to be developed to foster a sense of community and belonging. With almost half of all respondents believing property prices will inflate further over the next two years, the government and banks will need to work hard to educate property buyers and provide appealing residential finance programs to assist with their housing purchases.”

The full results of the survey will be revealed to the general public at the 6th annual Cityscape Jeddah, which will be held 5-7 April 2015 at the Jeddah Center for Forums and Events. The event consists of the two-day Real Estate Workshops and the three-day exhibition featuring over 50 exhibitors and which is expected to attract more than 10,000 attendees.

Concluding his comments on an upbeat note, Dr. Abdullah bin Mahfouz, stated: “Cityscape Jeddah 2015 is taking place this year against a backdrop of comprehensive government reform and unprecedented commitment to support the real estate industry and close the gap between supply and demand, therefore we look forward to seeing some encouraging developments and outcomes at this year’s event. Over the past six years Cityscape Jeddah has been established as the leading real estate event in the Kingdom of Saudi Arabia and we are proud to continuously support the government’s vision for growth in the real estate industry and highlight iconic architecture and innovative development in the region’s biggest real estate market.”

The YouGov survey was conducted amongst 1,270 residents across Saudi Arabia between 3 - 12 March 2015. Data is broadly representative of the online population in Saudi Arabia.