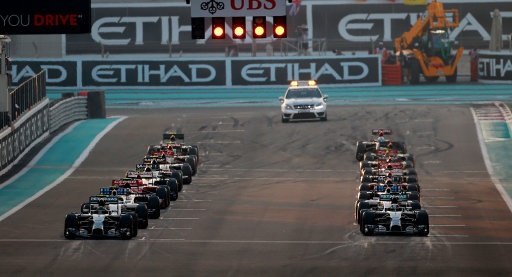 A new study into the perception of major sporting events held in the UAE has found that the most familiar world sport currently hosted by the Emirates amongst residents is the Formula 1 Etihad Airways Abu Dhabi Grand Prix (57%), followed by the Dubai World Cup (37%), and the Dubai Duty Free Tennis Championship (36%).

The research conducted online amongst over 1,000 residents in the UAE found that the majority want their nation to host more major sporting events and many express the positive impact they have on the country and its population.

In fact, three-quarters of respondents interviewed believe being a host nation of major sporting events makes them proud to live there. Indeed, 83% agree hosting them is a good way for the nation to promote itself globally and 78% believe they have a positive impact on the community. Three-quarters also like the fact that being a host nation gives them the opportunity to see world-class athletes in person.

The Formula 1 Etihad Airways Abu Dhabi Grand Prix, which has been held at Yas Marina Circuit since 2009, is also the event with the highest level of attendance amongst UAE respondents, with 18% of those aware of the event having attended a race. This number rose to over a quarter amongst those residing in Abu Dhabi itself (27%), whilst it was the joint highest attended event amongst Dubai residents together with the Dubai Duty Free Tennis Championships (both 18%). In Sharjah, it was the joint highest with Pakistan cricket matches (both 15%), with the Emirate recently hosting a 5-day test match between Pakistan and England.

The willingness to recommend major sporting events in the UAE was high amongst attendees. The most frequently recommended event was the Formula 1 Etihad Airways Abu Dhabi Grand Prix, with 56% of attendees saying they were very likely to recommend the event to their friends, whilst this was 49% for Dubai World Cup attendees.

Each major UAE sporting event had distinct characteristics amongst respondents. The Formula 1 Etihad Airways Abu Dhabi Grand Prix is perceived as intense (42%), whilst the Dubai World Cup is considered to be prestigious (48%). The Red Bull Air Race World Championships, hosted in Abu Dhabi, is viewed as unique (44%), whilst Pakistan cricket matches, which have been hosted in Dubai, Abu Dhabi and Sharjah, are seen as emotional (38%).

“The 2015-2016 sporting season is in full swing, with the DP World Tour Championship in Dubai, the Formula 1 Etihad Airways Abu Dhabi Grand Prix and Emirates Airline Dubai Rugby Sevens all taking place in quick succession” notes Scott Booth, YouGov’s Head of Tourism & Leisure research in MENA. “The results from YouGov’s study show that major sporting events are engaging and exciting the general population across the UAE who believe they play an important role in the morale of their country and its recognition on a world stage.”

Research for this study was conducted online using YouGov's Omnibus online research service amongst 1,002 residents in the UAE from 28 October to 4 November 2015. Data is broadly representative of the online population in the UAE. 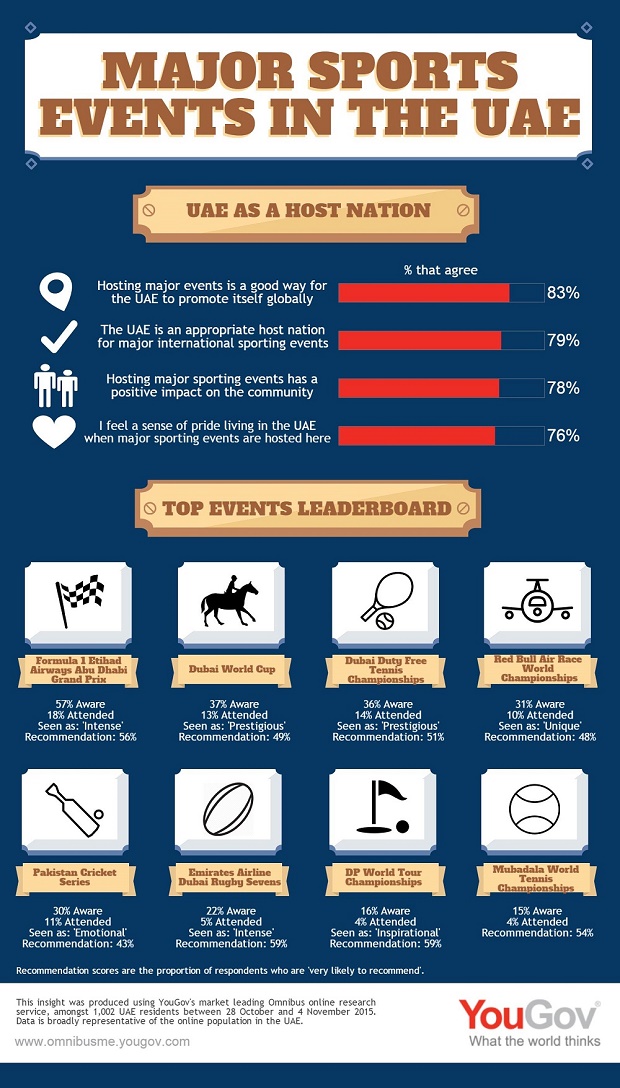