Each month, we’ll be assessing which brands in UAE, KSA and Egypt have had the biggest uplift in Advertising Awareness.

This month, Souq.com in Egypt has shown the greatest increase in Advertising Awareness, according to BrandIndex – YouGov’s daily brand tracker. This surge likely stems from their various online and offline advertising campaigns, ranging from the catchy TV and YouTube adverts, to the White Friday and Daily Deal sales.

BrandIndex’s Advertising Awareness score -- which measures whether respondents have seen any advertising for a brand in the past two weeks -- shows a large gain for Souq.com in Egypt over the last month, increasing from 33.9% in the beginning of November, to 43.4% by mid-December. 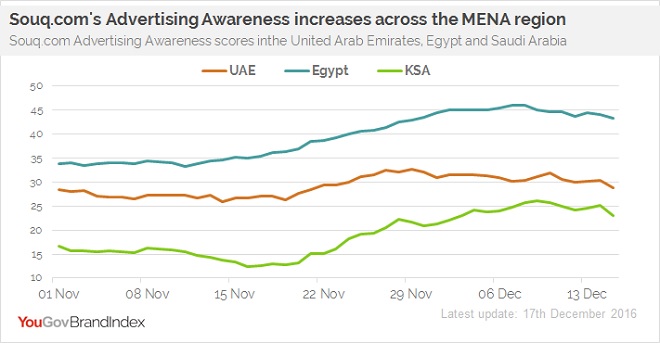 This increase isn’t limited to Egypt however; the brand has also had a significant increase in Saudi Arabia, Increasing from 16.7% in the beginning of November to 23.0% by mid-December. In the UAE, Souq.com rose from 28.4% advertising awareness in the beginning of November to 28.9 currently, with a peak of 32.7% in late November, around the time of the White Friday promotion.

The increased levels of Advertising Awareness also seem to have generated quite a bit of chatter for Souq.com. BrandIndex’s Word of Mouth Exposure score – which measures whether respondents have spoken about a brand (whether in person, online or through social media) over the past two weeks – shows significant increases in all three markets. 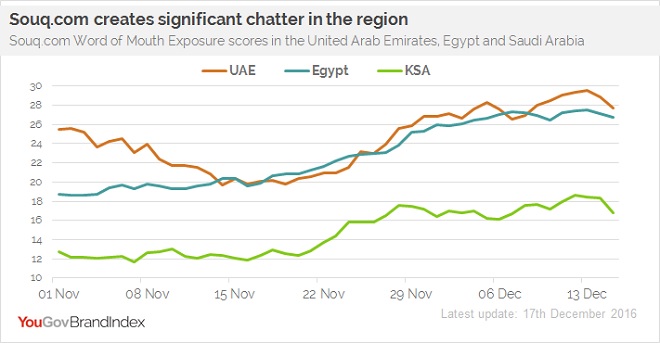 Souq.com’s Word of Mouth Exposure in Egypt rose from 18.7% in the beginning of November, to 26.8% by mid-December, while the score in Saudi Arabia jumped from 12.8% to 16.8% in the same time period. The changes in the UAE are more noticeable however, with the brand’s Word of Mouth Exposure dropping from 25.4% at the start of November to 19.8% by the 20th, only to rise beyond their original score to 27.7% by the 15th of December.

Accordingly, whether through the catchy one-for-one Souq song or through the numerous sales featured on the website, the Souq.com brand is receiving a greater deal of attention, which is in turn creating more conversations around the brand. What remains to be seen is whether this can help the brand hold back some of the new competitors entering the market in the coming year, such as Noun.com.

Share your thoughts and opinions with us in the comments section below.