The increase in access to technology and its use by children has been one of the rising concerns among parents globally. Close to 9 in 10 children across UAE and KSA have access to tablets, smartphones or other handheld electronic devices with screens, a new YouGov research reveals. These children are spending an average of two and a half hours every day on them. 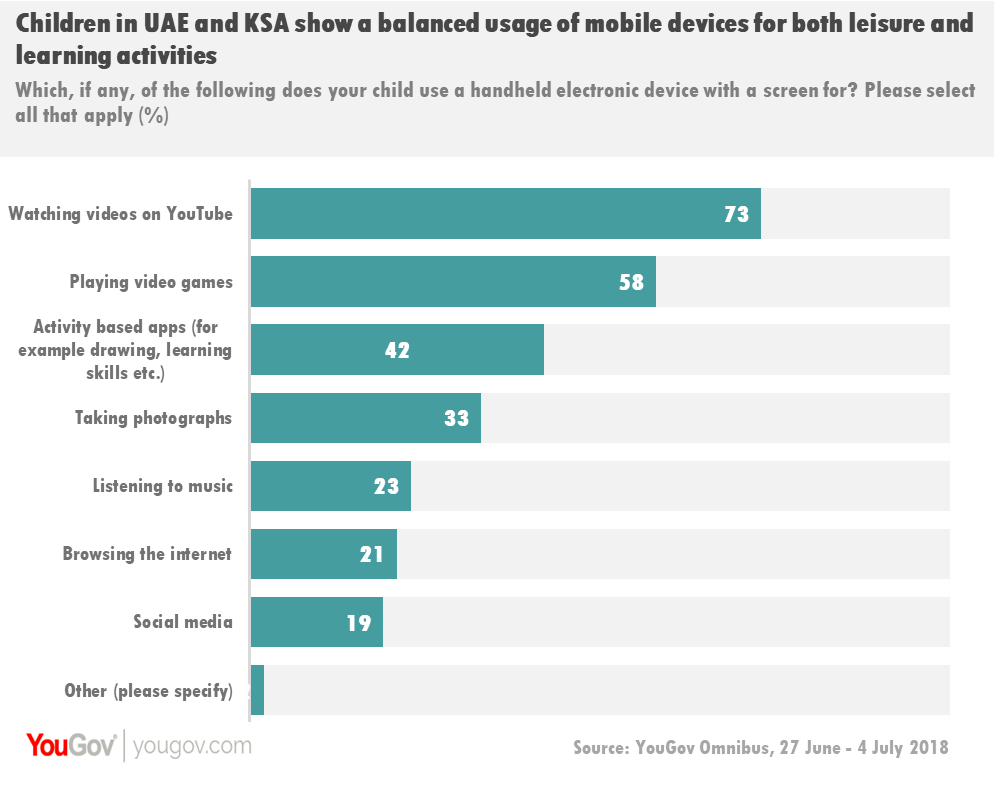 Children in UAE and KSA show a balanced usage of mobile devices for both leisure and learning activities. While watching videos on YouTube (73%) and playing video games (58%) are the most popular activities that children engage in, activity-based apps (like drawing, learning skills, etc.) are also popular with 2 in 5 children using such apps.

The right age at which children should be given access to social media has remained a topic of debate for quite some time now. According to parents, less than 1 in 3 children have a social media account, and among those who do, in close to 80% of the cases, the accounts can be accessed by the parents.

Social media is actually perceived as the least popular activity by parents.

Parents believe children are more likely to spend time taking photos, listening to music or browsing the internet. (Browsing the internet and listening to music are more popular in UAE as compared to KSA). Facebook is the most popular social media site among children (70%), followed by Instagram (42%) and Snapchat (35%), while Twitter is the least popular (16%). Facebook is much more popular among children in UAE (81%) as compared to KSA (59%), while the opposite is true for Snapchat, which is used more in KSA (43%) than in UAE (27%).

2 in 5 parents do not think that their child would choose video games over a physical activity, with the proportion being higher in UAE (49%) compared to KSA (35%).

Parents are making outdoor activities a priority for their children, with 7 in 10 children playing outdoors, half of them socialising with friends in person, 35% playing sports and 20% exercising. Almost all parents (94%) encourage and support their children to participate in sports, with physical activity accounting for an average of two and a half hours per day for children. It’s great news as this is greater than recommended 60 minutes or more of physical activity every day.

Many parents put value in technology as part of their children’s development. More than half believe that watching videos, playing video games and using electronic devices have educational benefits, 3 in 5 say that children should be taught to use technologies from a young age, and 1 in 3 actively encourage their child to use these devices.

At the same time, parents work to find a balance and avoid excessive use of technology. 4 in 5 parents surveyed try to actively limit their children’s ‘screen time’ (i.e. time spent on these devices) and keep an eye on the content (videos/games) their children access, while 3 in 5 parents do not allow use of any devices during meals/family outings.

Parents view obesity as the biggest health issue among kids today with more than half of those surveyed naming it as a serious health issue, followed by anxiety/psychological issues (named by close to half of the parents).

While the majority of parents (69%) acknowledge the link between excessive use of technology and childhood obesity, when it comes to the health and well-being of their children, nutrition is given the bigger priority, followed by physical activity and limiting ‘screen time’. In this regard, parents gave top-most rank to ensuring their child eats breakfast (28%), and serving more fruits and vegetables (26%). This was followed by an hour of outdoor activity per day (21%) and limiting the use of screens (17%).

Commenting on the findings Head of Omnibus Research, Kerry McLaren, said, "In a day and age where technology sits at the forefront of our existence it is refreshing to see that parents are still striving for a balance with their children, pushing them to also partake in daily physical activity.  It appears that the majority of parents see a clear link in the increased use of technology and the link it has with childhood obesity and are conscious to not let their children depend on it."

Data collected online by YouGov Omnibus among 1,009 respondents in Saudi Arabia and the UAE between 27th June and 4th July 2018 using YouGov’s panel of over 6 million people worldwide. Data is representative of the adult online population in both countries.