The digital age has empowered us with access to information at the touch of a button and made it easier to stay connected with people. Although overall this is positive to our day to day life we have seen a dramatic shift in the way we now communicate with each other. Although we find ourselves more connected than ever, we have somewhere lost the ability to converse with each other without the safety net of our phones. We are living our lives online and the smartphone has become our go to place to fulfil a number of our day to day needs. So much so, it may become difficult to function for a long period of time without it. When you really think of it, how long can you go without your phone?

A recent YouGov survey reveals 9 in 10 respondents in the UAE own a smartphone currently, with 70% of those who do not own one planning to purchase one in the near future. The addictive nature of smartphones is becoming more prevalent over the years and as they continually advance. On an average people claimed to spend 6.5 hours on their smartphone every day, with women spending more time (average of 7 hours) than men (average of 6 hours). Not surprisingly, the usage among younger age groups also exceeds the overall daily average, with those aged between 18- 29 years spending an average of 7 hours a day stuck to their phones.

The smartphone has become such an integral part of our lives that we cannot help but be distracted by it almost wherever we go and amidst whatever we do. In terms of frequency of use, 76% of respondents admitted to frequently/very frequently looking at their phone while in bed right before sleeping while 72% claim to reach for their device immediately after waking up in the morning.

Mobile distraction is common even while watching TV shows/ online videos (56%), while dining in a restaurant with friends/ family (41%), while working (40%) and even at the cinema (20%). Emiratis (31%) and Arab Expats (21%) are most likely to indulge with their phones at the cinema while Westerners are least likely to do so. A small proportion (12%) even admit to frequently using their phones while driving, with 21% of Emiratis confessing to this dangerous habit. Men also report being more likely to be distracted by their phone while on the road, with 14% of them checking their device compared to 8% women. 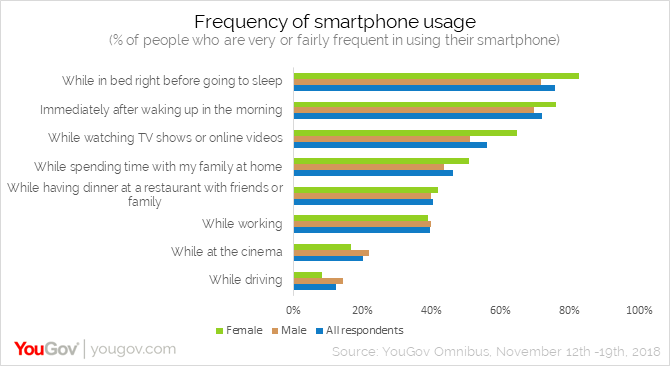 Are we addicted to our phones?

A bad habit becomes an addiction when it starts negatively impacting our lives. 4 out of 5 respondents frequently use smartphones to mindlessly pass time. 68% admitted to losing track of time when using their phone and 63% say they always sleep with their phone right beside them. 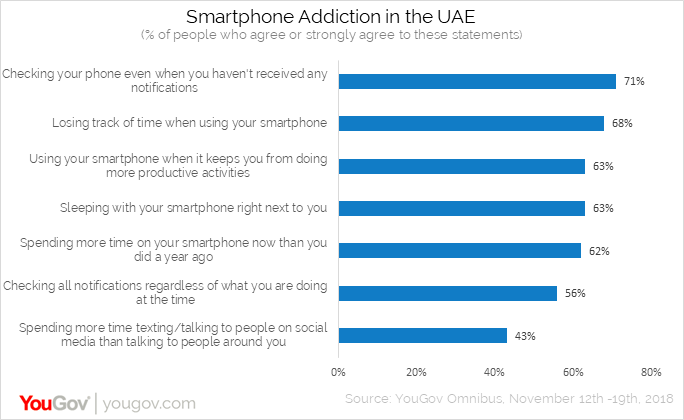 This mobile interaction seems to have also taken a toll on their social life with 43% saying they spend more time texting or talking to people on social media than they do interacting with people around them. 56% claim to immediately check their notifications regardless of what they are doing at that time while 71% check their phone for updates even when they haven’t received any notifications.

It appears that respondents recognise a trend of increased activity on their device with around 6 in 10 respondents saying they spend more time on their phone now than they did a year ago and 63% saying they frequently use their phone even when it keeps them away from more productive activities.

Unplug from the smartphone

Although addiction to smartphones is unavoidable in today’s digital age, three-quarter of respondents regularly take steps to limit their phone usage. The most prominent steps consumers are putting in place are to put their phone on silent (41%), limit the apps installed (30%), keeping the phone out of reach (25%) and adjusting the settings to receive fewer notifications (21%). Men seem more willing to take regular steps to limit usage when compared to women.

In other steps of reduction, 1 in 5 respondents stated not using their phone during specific times of the day, with evening taking priority for screen time. Right after waking up and the first half of the day when work starts emerged as the most common times when people avoid using their phones.

Speaking about this, Kerry Mclaren, Head of Omnibus, said, “Smartphones have become intertwined with our daily routine and it seems our reliance on them is ever increasing. One of the most worrying points from this piece is the percentage of people who openly admit to spending more time messaging/talking through social media than actually conversing with people in the world around us. The fact that we are spending a quarter of our day glued to our mobile screen is a cause for concern as we are missing so much of what is actually going on around us. Apart from affecting our productivity, this unhealthy dependency can have a serious impact on our mental health and relationships.  There is a need to create more awareness around how distracted we really are and look at ways to tackle the problem, creating a balance. We do see positive steps coming from tech giants like Apple who are offering ways to track/limit phone usage but people themselves need to recognise the habits they may have developed and make conscious efforts to balance their day between technology and the life around them.”

Data collected online by YouGov Omnibus among 1,012 respondents in the UAE between 12th and 19th November 2018 using YouGov’s panel of over 6 million people worldwide. Data is representative of the adult online population in the country.