Globally we are engaged in a continual conversation around becoming a more health conscious society and researching the steps we need to take to adapt our current lifestyle choices and combat many of the negative associations that run alongside them. Overall health can fall into various categories but one which remains a popular focal point is diet. Standards across the world are being enforced to aid the population with the choices they make, with one interesting movement being the inclusion of calorie content on all menus. So with UAE residents dining out at least one or more times a week, we wanted to explore how receptive the average consumer is to this growing trend and how influential it would be over their food choices when eating out.

Eating out in the UAE

A new YouGov survey reveals that 65% of respondents in the UAE claimed to eat out at least once a week. Of the surveyed respondents, UAE Men (68%) as well as those who are married but without children (72%) are some of the frequent diners, eating out regularly. Even the millennials, both, younger ones aged between 25-29 years (76%) and slightly older ones, between 30-34 years (70%) have also reported such trends.

When asked about overall perception of calorie content across a range of cuisines consumers seemed to be fully aware of the spectrum from low too high for each dish.

Eating at home (54%), Exercise/ gym (51%) and eating healthier meals (50%) emerged as the top activities undertaken by people looking to maintain a healthy lifestyle. Surprisingly men (56%) and Emiratis (68%) seem to be more conscious of their health and exercise in a bid to stay healthy, compared to women and people of other nationalities. On an overall level, 1 in 5 people keep a track of their calorie intake, something we found most common in Emiratis (31%), those aged 40+ (24%) and those whom are married without children (23%).

When eating out, only a quarter of respondents claimed to always keep a track of their calorie intake, while 44% don’t watch their calorie intake at all. Interestingly, those who are single (25%) seem to be more interested in tracking, which stands as expected especially as they featured as eating out more often.

Close to half (43%) would prefer restaurants showcasing calories on the entire menu while a quarter recommend restaurants having a separate 'low calorie' section, without showing the calorie count. Emiratis (53%) and those aged between 30-34 years (50%) more strongly proposition the former than the latter. 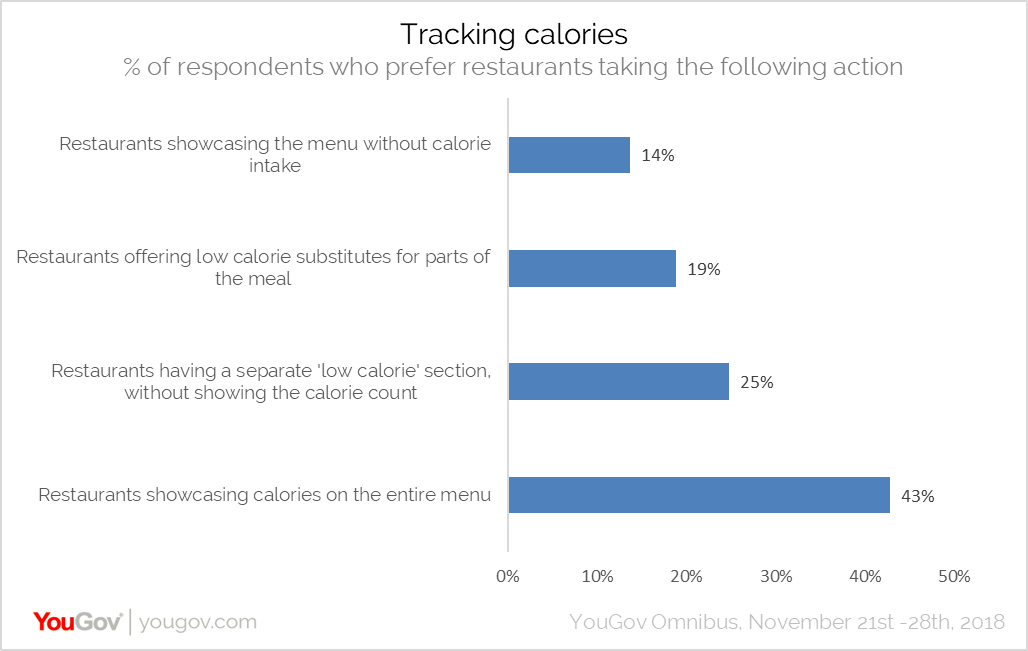 More men than women would want the entire menu to have the calories displayed (46% versus 37% respectively) as women opted for restaurants offering low calorie substitutes as an offering.

Calorie labelling- Yes or No?

In response to restaurants taking this big step towards promoting healthier lifestyles, close to 60% of people said that restaurant menus displaying calorie labels would help them make better choices while ordering food. The sentiment of ‘making better meal choices’ has been high across all the different types of restaurants, more so for QSRs. Although the movement to introduce this to menus is positive and welcomed by a large percentage, a quarter of respondents claimed it would not change their eating habits.

45% have even shown willingness to pay a premium to have a low calorie version of their favourite dish. Not only have the Emiratis demonstrated more enthusiasm to make informed food choices due to calorie labelled menus, but 66% of them have also claimed to pay a premium for healthier versions of food.

Overall, men have been more vocal about their influence when it comes to food choices. They are taking more steps to ensure a healthy lifestyle, keeping a track of their calorie intake and are also more willing to pay a higher price for healthier food (48%). Women, on the other hand, seem to rely on their prior knowledge of calorie information to make their food choices, and in comparison, are less likely to feel the need to monitor or be reminded when eating out.

Commenting on this, Kerry McLaren, Head of YouGov Omnibus, said, “We are seeing some positive steps here in the UAE, with a high percentage of diners showing a keen interest in monitoring their food consumption. Balance in your diet is key and with fast food being so heavily advertised in this part of the world it is positive to see that although respondents don’t quite want to step away from dining in quick service restaurants they do want to be aware of the calories they are consuming when eating these foods. It definitely shows steps towards making healthier choices. It is interesting to see some breaks in stereotype between the genders when it comes to monitoring your calorie intake. We are programmed to think that women are the more calories conscious gender when actually these results show men stepping forward as the ones who would like to be openly mindful of what they are consuming.

Data collected online by YouGov Omnibus among 1,004 respondents in the UAE between 21st and 28th November 2018 using YouGov’s panel of over 6 million people worldwide. Data is representative of the adult online population in the country.