Financial planning is an important part of most people’s monthly routine. Taking into account that the majority of the population is made up of expats, it is important to be organised financially and set the foundations in order to build a secure future. Not just planning and budgeting, but overall financial literacy is important to be financially sound and to avoid accumulating unnecessary debts. Our new survey explores how in control UAE residents are when it comes to their finances and the degree of planning they are adopting when monitoring and budgeting their monthly income.

When looking at overall monetary well-being, more than half of the surveyed respondents across the UAE were happy with their current financial situation, with around 1 in 3 claiming to always feel in control of their finances. The majority seem to have adopted healthy financial practices including timely payment of bills (75%), upfront payment or reduced payment periods (73%), having a plan for future financial challenges (57%) and avoiding using credit cards out of necessity (56%). This suggests a really healthy approach in the region to future spending and saving.

Although this creates quite a positive picture there are still underlined financial worries for a considerable portion of residents, with over a third of respondents (35%) continually worrying about their finances and almost half (47%) feeling troubled about losing their job or facing a large pay cut.

Speaking about best practices for financial planning, monitoring expenses (84%), paying off credit card/ loan debts on time (83%) and budgeting (82%) are considered to be the most important steps for a healthy financial life.

When it comes to budgeting, 85% consider themselves well-informed on financial preparation for the month. This knowledge seems to be being put into practice with 81% claiming to be proficient in preparing budgets and 87% monitoring expenses regularly.

Of those who exercise this level of planning, around 60% prepare detailed budgets, with 80% feeling they are able to stick to what they have calculated. For those who are not able to stick to a budget, the biggest reasons include, large unexpected expenses (49%), inability to track expenses regularly (38%), underestimating expenses when budgeting (33%) and over-spending (31%).

Saving prevails as another important step towards financial security, where we see people putting around 6% of their earnings into retirement savings.

Comparatively, insurance (excluding mandatory ones) and investments emerged as the least important and least engaged in practices by respondents, with only close to half investing money (56%) or buying insurance (51%).

Debt is common among UAE residents, with more than 3 in 5 respondents currently having debt of some kind, most commonly from credit cards (33%) and personal loans (28%). The high percentage of personal debts could be a direct result of inadequate financial knowledge, with 29% of respondents indicating they do not feel well informed about lending for credit cards or loans.

When looking at the habits of those with current outstanding debt, we see around 2 in 5 displaying what could be deemed as risky behaviour. The most damaging would potentially be those using credit cards to pay for things they can’t currently afford (43%), not saving any money due to debt (40%) and inability to make debt repayments on time (36%). 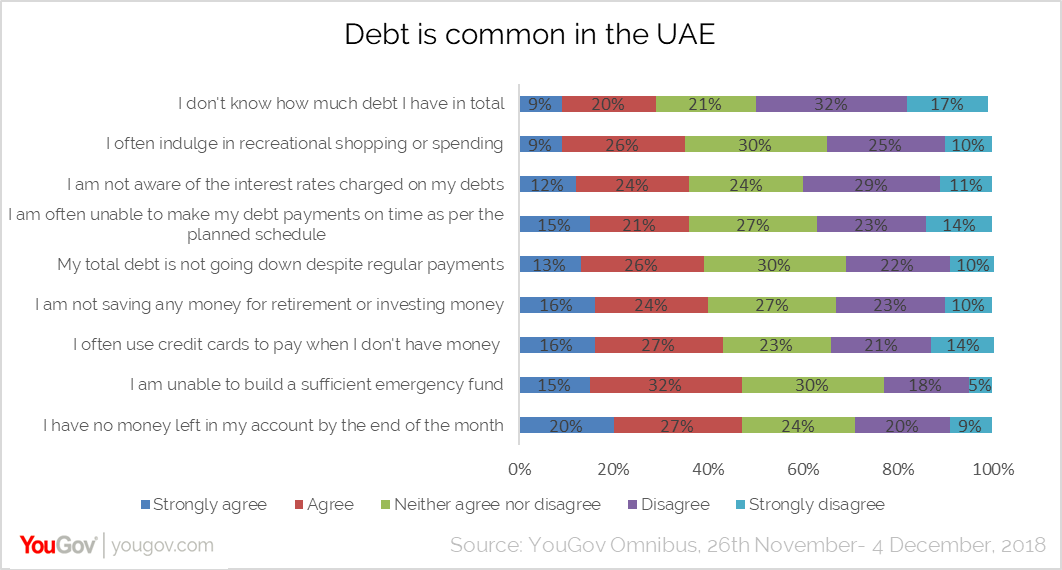 Speaking about this, Kerry McLaren, Head of YouGov Omnibus, said, “Although most UAE residents seem to be managing their personal finance fairly well, debt seems to be a significant issue for them. In this cashless age, credit cards seem to be a blessing to push through the unexpected/unplanned drain of purchases. However, if not managed well, credit cards can become a burden instead of convenience. A third of UAE’s debt is from credit cards. What is more alarming being that more than a third of debt-ridden people are oblivious to the interest rates on debts and even more worrying, a slightly lower percentage is unaware of their level of debt overall. This is an indicator of low financial literacy and awareness. Although people need to take more time to understand the factors that come with borrowing, it also sits with the responsibility of banks who could do more to ensure their customers are financially literate.”

Data collected online by YouGov Omnibus  among 1098 respondents in the UAE between 26th November and 4th December 2018 using YouGov’s panel of over 6 million people worldwide. Data is representative of the adult online population in the country.