A brand logo builds a level of familiarity between the brand and the consumer. It acts as a quick, visual representation of a brand’s message and position and is often used as a tool to stir emotion and a center point for recognition. There are always two sides to the argument when it comes to evolving a brand’s image. On one side you want to show willingness to change with the times and stay contemporary but ultimately this has to be met without making such drastic steps that you lose your identity or worse become unrecognizable to your customers.

To understand this better, the latest YouGov survey explores UAE consumers’ brand loyalty in connection to modernisation of logos and reveals the changes that consumers are receptive to.

How important is the Brand Logo?

From a list of given brand attributes including packaging, celebrity endorsements, colours, taglines etc. we found that brand logo surfaced as top when it came to overall recall of preferred brands.

Does a change in image impact loyalty?

For a considerable proportion of respondents (57%) changing the brand logo would not affect their overall brand loyalty at all. That being said, we did find a third (31%) who voiced displeasure at the element of change, with a further 12% who took a much stronger stand and claimed they would move away from the brands if they were to modify the logos at all.

Interestingly we noticed, brand loyalty seems to be stronger amongst women with 63% claiming to remain unaffected by the logo change as compared to 55% men who state the same.

How would the change be perceived?

Although a brands logo acts as a symbol of recognition for consumers, we do not see complete aversion to the idea of companies making alterations in order to evolve. Interestingly, we saw around half of the respondents agree with the fact that brands with complicated logos should simplify them and feel a logo change is required to keep up with current competitors and trends. 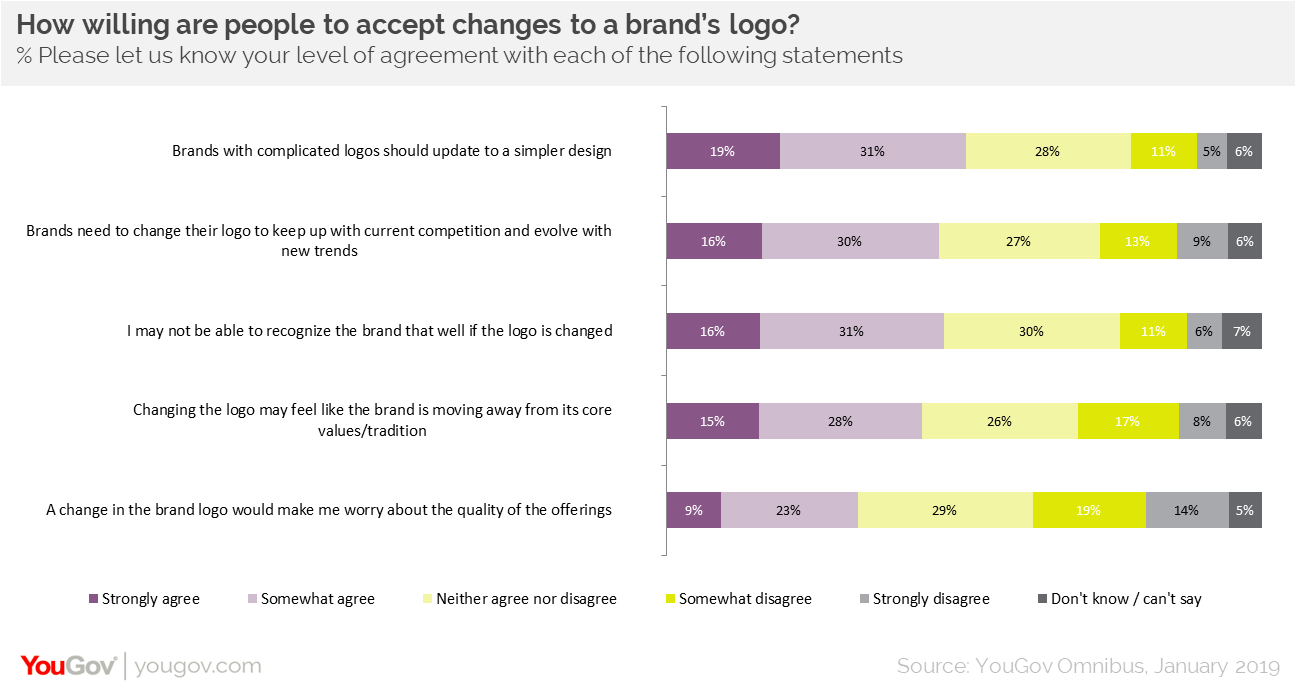 On the flip side of this, we do find a considerable proportion of people who may not be so open to such modifications and view logo changes negatively - either in response to lack of brand recognition or due to an overall sense that the brand would be shifting from its core values or offerings.

Dos and Don’ts of changing a logo

When given a list of brand logo elements for potential alteration, we found over a third of consumers expressed most comfort with a change in font. Editing of the symbol or colour gradient also came out as well accepted, with the changes not having an impact on their loyalty towards the brand itself.

On the other side of the spectrum, a quarter were less receptive towards brands changing the logo colour scheme entirely or adding/removing the brand name from the logo. Going further, we noticed, less than a fifth of females were closed to the idea of revamping brand logos at all.

Speaking about this, Kerry McLaren, Head of Data Services, MENA, said, “As we can see from the data findings, there is no definitive answer as to whether the evolution of a brand’s logo will be met with positive or negative acclaim. All we can take out is that brands looking to embark on this journey should consider the impact it can have and prepare accordingly. One of the key takeout would be that brands need to understand the profile of their consumers and make sure a change in direction reflects what they represent. Testing is key, so make sure you communicate with your core target audience and understand what connects them with your products and image and reflect this in any re-design.”

Data collected online by YouGov Omnibus among 1,001 respondents in the UAE between 31st December, 2018 and 7th January 2019 using YouGov’s panel of over 6 million people worldwide. Data is representative of the adult online population in the country.