However, although 96% say the curriculum influenced their choice of school, just 82% are satisfied with it

While the vast majority of UAE parents believe their child’s school offers value for money, a sizeable number thinks they do not, new data from YouGov reveals.

Dubai schools are attempting to stay attractive to parents with fee freeze and ‘mid-range fee’ offerings. Now, new YouGov research explores how parental attitudes compare to their experiences with their children’s education.

It reveals that three in four (78%) parents believe they get either the value for money they would expect (45%) from the school or get more than they pay for (33%). However, for one in seven (15%) the school does not provide value for money (the remaining 7% didn’t know or couldn’t say).

YouGov’s data also shows that while almost all parents selected their child’s school based on things such as curriculum and the quality of teachers, in many cases their overall satisfaction levels for these factors is less when their child is actually attending the school. While 96% of parents chose their child’s school for its curriculum, only 82% are satisfied with their experience of it. There are similar figures when it comes to teaching approach and methods (95% vs. 82%), quality of teachers (94% vs. 83%), and overall reputation of the school (93% vs. 84%).

The area with the biggest discrepancy emerges when it comes to the preservation of culture (Islamic or other home culture of the parent). Here, 85% selected the school based on this factor, but just 66% are satisfied with their overall experience of it. 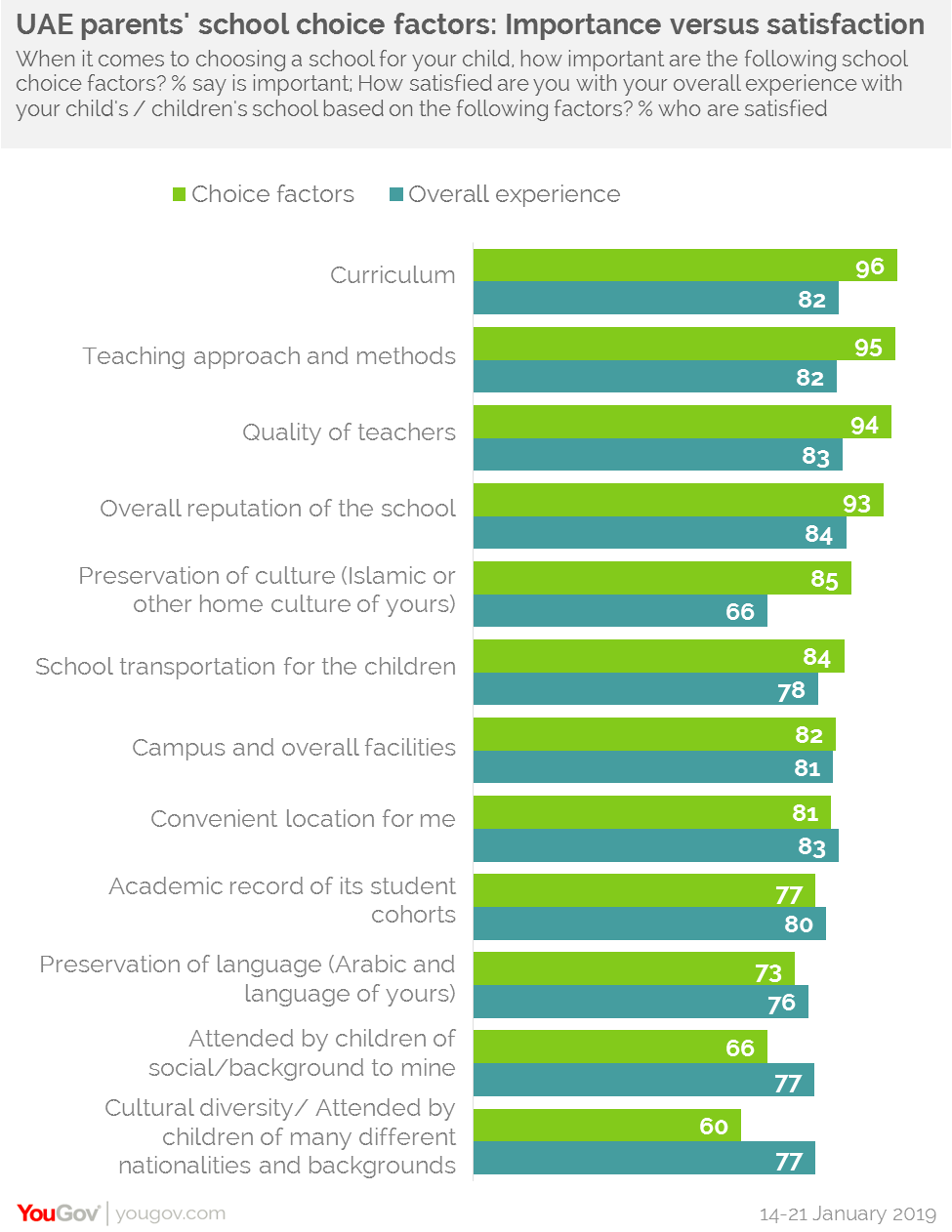 YouGov research finds that overwhelmingly, UAE parents pay for their child’s education entirely on their own (71%). One in six parents (16%) state their employer pays all of the fees, while 6% of parents split payments between themselves and their employer.

Commenting on this, Kerry McLaren, Head of Omnibus, MENA, said, “Choosing where to send your children to school is a big decision for any parent and our research shows that, on the whole, most think they get good value out of the UAE education system. However, while almost all parents select their child’s school based on things such as its curriculum and the quality of teachers, we found that in many cases their overall satisfaction of these factors is less when their child attends school. Schools need to be mindful of this in their efforts to deliver value for money and stay competitive in the market.”

Data collected online by YouGov Omnibus among 506 respondents in the UAE between 14th and 21st January, 2019 using YouGov’s panel of over 6 million people worldwide. Data is representative of the adult online population in the country.