Although aggressiveness, being unemotional and feeling superior to women come out as the most ‘toxic’ traits, they are considered the least masculine by people

Gillette’s new #MeToo-inspired advert has sparked conversations about what traits are seen as ‘masculine’ and which instead represent ‘toxic masculinity’. Toxic masculinity is most widely perceived as harmful behaviours by men that not only affect them, but even people around them who may or may not identify with the conventionally masculine traits.

New research from YouGov among UAE residents explores which attributes, that have traditionally been associated with masculinity, people consider ‘toxic’. It finds that UAE residents don’t consider the most ‘toxic’ male traits very ‘masculine’ in nature.

Aggressiveness comes out as the most toxic masculine trait, with almost half (48%) believing it is ‘toxic’ compared to just 15% who consider it ‘masculine’. The other traits most thought of as ‘toxic’ are also among the least likely to be thought of as ‘masculine’ – with over a third (36%) thinking being unemotional is a ‘toxic’ trait, compared to 10% that think it is a masculine one.

The trait that YouGov’s research found is thought of as the most ‘masculine’ among UAE residents is taking responsibility (64%). It is followed by confidence (56%), physical strength (46%), bravery (45%), and self-reliance (43%). 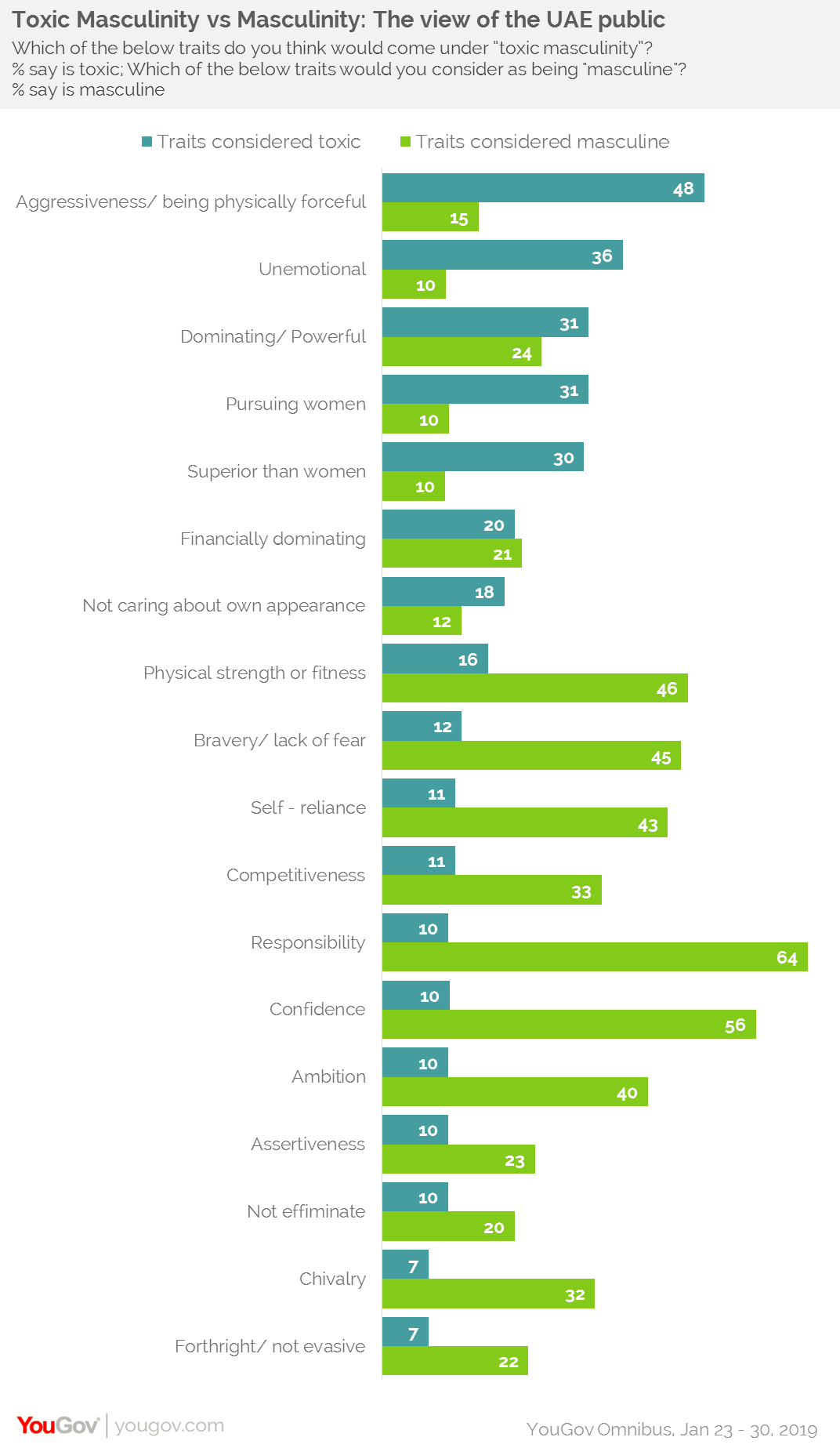 YouGov also asked about traits traditionally considered to be ‘feminine’. The research finds that more than half feel that men would benefit from embracing characteristics such as gentleness (56%), tolerance and forgiveness (54%), understanding own feelings (53%), and being caring (53%). Emotional maturity is the ‘feminine’ trait that women most want men to develop (62%), while gentleness is the attribute most male respondents (61%) think men should embrace.

Commenting on this Kerry McLaren, Head of Omnibus, said, “The #MeToo movement and Gillette’s latest advert have placed the subject of masculinity in general – and toxic masculinity in particular – on the agenda. Our data suggests that there are relatively few ‘masculine’ traits that people in the UAE see as ‘toxic.’ Indeed, in most cases people are much more likely to see the characteristics we asked about in a more positive light.”

Data collected online by YouGov Omnibus among 1,008 respondents in the UAE between 23rd and 30th January 2019 using YouGov’s panel of over 6 million people worldwide. Data is representative of the adult online population in the country.