The final season of Game of Thrones has just started intensifying the drama. With the epic end to the Battle of Winterfell, we asked people who according to them will assume the seat of Westeros and what will be the fate of the contenders to the Iron Throne.

Jon Snow appears to be the frontrunner to win the throne across countries and continents. In the UAE, almost a third (31%) of residents want Jon Snow to reign the whole nation and almost as many (28%) think he is most likely to claim the throne. 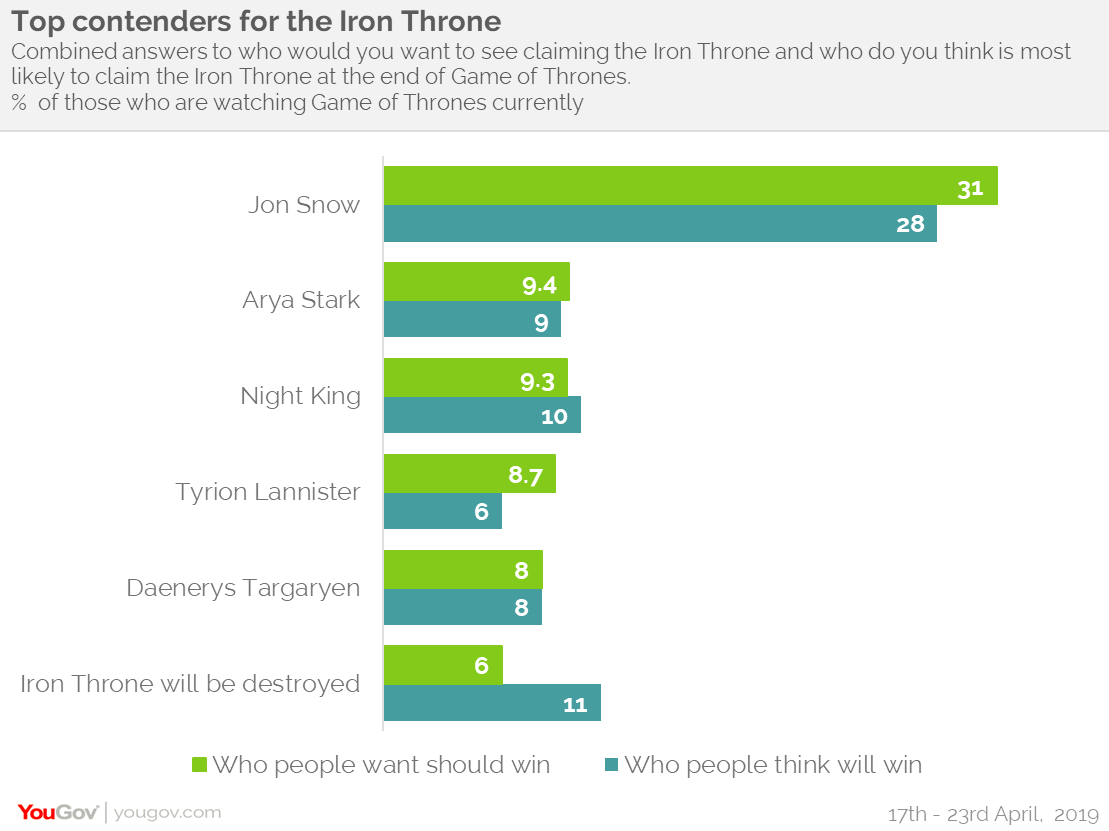 Jon’s beloved sister, Arya Stark, who emerged as a hero in this season, comes in the second place, with 1 in 10 people (9.4%) hoping she takes the seat and just as many (9%) believing she rightly will.

While everybody favours Jon Snow, men and women are most divided over Arya Stark, with a higher number of women wanting her to claim the throne as compared to men (14% women vs 7%men), who prefer the Night King and Jamie Lannister over her.

Following Arya very closely is the Night King who a tenth (at 9.3%) want should become the next monarch of Westeros and almost as many (10%) think he most likely will. Although the third episode eliminated his chances of becoming the king, in the Game of Thrones universe anything is possible.

Daenerys is far behind in both the lists, with 1 in 12 (8%) wanting her to reclaim her ancestor's throne and as many (8%) thinking she is most likely to win the game of thrones.

Cersei, who is one of the most despised characters of the show, sits at the bottom of the list, with only 3% wanting her to win. In fact, she tops the list of those fated to die, with close to half (45%) saying she will die in this season.

The Night King is second in the list, with 43% believing he is doomed to die (and the last episode sealed his fate).

People are confident about the stark children surviving the ordeal and they top the list of survivors- Arya Stark (58% believing she will survive), Jon Snow (56%), Sansa Stark (56%) and Bran (52%), along with Tyrion Lannister (53%).

On the other hand, close to a quarter (23%) seem unsure about the fate of the mother of dragons- Daenerys Targaryen, who is a leading contender for the throne.

Among those currently watching, a third (34%) are watching the show on TV using their OSN TV subscription, 15% are consuming it digitally through Wavo subscription, 36% are using some free source and 9% are streaming from websites in other countries via VPN.

Data collected online by YouGov Omnibus among 1,063 respondents in the UAE between 17th and 23rd April 2019 using YouGov’s panel of over 6 million people worldwide. Data is representative of the adult online population in the country.