Most UAE residents would seek professional help if they or someone they knew was suffering from mental health problems, however, the proportion saying they would get expert assistance varies markedly depending on the type of issue, new research from YouGov reveals.

The research comes in the wake of the Dubai Health Authority’s (DHA) 'Happy Lives, Healthy Communities' strategy to remove the stigma around mental health. It finds that more than seven in ten (72%) would seek – or suggest seeking – help from a mental health professional if they (or a person they are close to) were struggling with their mental health.

More than half (55%) would also talk to a close friend or family member, while three in ten (30%) would talk to a trusted authority figure, such as a religious leader. Around a quarter would either go to a general practitioner (28%) or seek help from alternative medicine or treatment (25%). YouGov’s data shows that fewer than one in five would do research online for help (19%) or handle it themselves (15%).

However, the proportion who would seek professional help varies greatly depending on the type of mental health issue.

The study finds that majorities would look for expert assistance for mental health issues such as having suicidal thoughts (62%), self-harm (61%), hallucinations or delusions (56%), anxiety issues (55%) and post-traumatic stress disorder (53%). Fewer than half, though, would seek professional help when it came to obsessive-compulsive behaviours (49%), personality disorders (47%), bipolar disorders (43%) and eating disorders (36%). 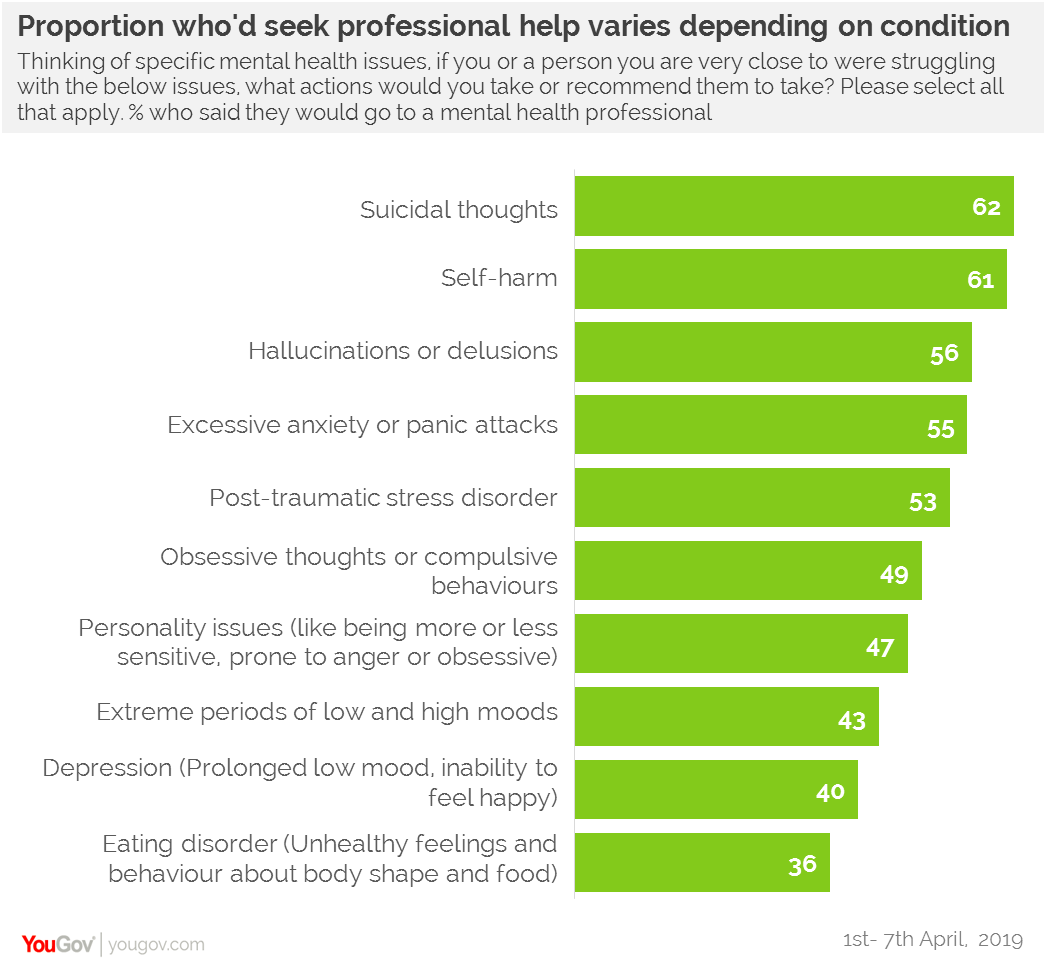 Even though there is a willingness to reach out to professionals for help in many circumstances, YouGov’s research suggests that a stigma exists around mental illness in the UAE.

More than two in five (44%) say that they would not feel comfortable talking about their mental health, if they were to struggle with it in the future. Similarly, nearing four in ten (38%) would feel embarrassed to deal with it and more than a third (36%) would be “uncomfortable” going to a professional for help.

The data shows that men are more likely than women to be embarrassed about addressing their mental issues (42% of men vs 31% of women) and also be less willing to seek professional help (39% of men vs 32% of women).

Three in five (60%) people think that promoting mental wellness through well-being activities in families, schools and communities, would be the most effective way to eliminate this stigma. Around half believe that the discomfort associated with mental illness in the country could be reduced by talking openly about mental health treatments as one would discuss physical health treatments (52%), creating awareness through government campaigns (49%), and normalising conversations about mental illness among friends and family (47%).

Data collected online by YouGov Omnibus among 1,085 respondents in the UAE between 1st and 7th April 2019 using YouGov’s panel of over 6 million people worldwide. Data is representative of the adult online population in the country.