The research shows how the holy month of Ramadan is likely to impact the usage of various lifestyle and entertainment applications used by UAE residents. While many believe their usage of grocery apps will increase, around three in ten (29%) think it will be unchanged, and one in eight (13%) feel it will go down.

Half of the residents state that their consumption of food delivery apps (51%) – such as Zomato and Talabat, and online shopping apps (49%) – such as Noon and Souq, will spike up during the festive period. Large numbers also believe the usage of health and fitness (46%), social media (45%) and video-on-demand apps (43%) will rise during Ramadan. 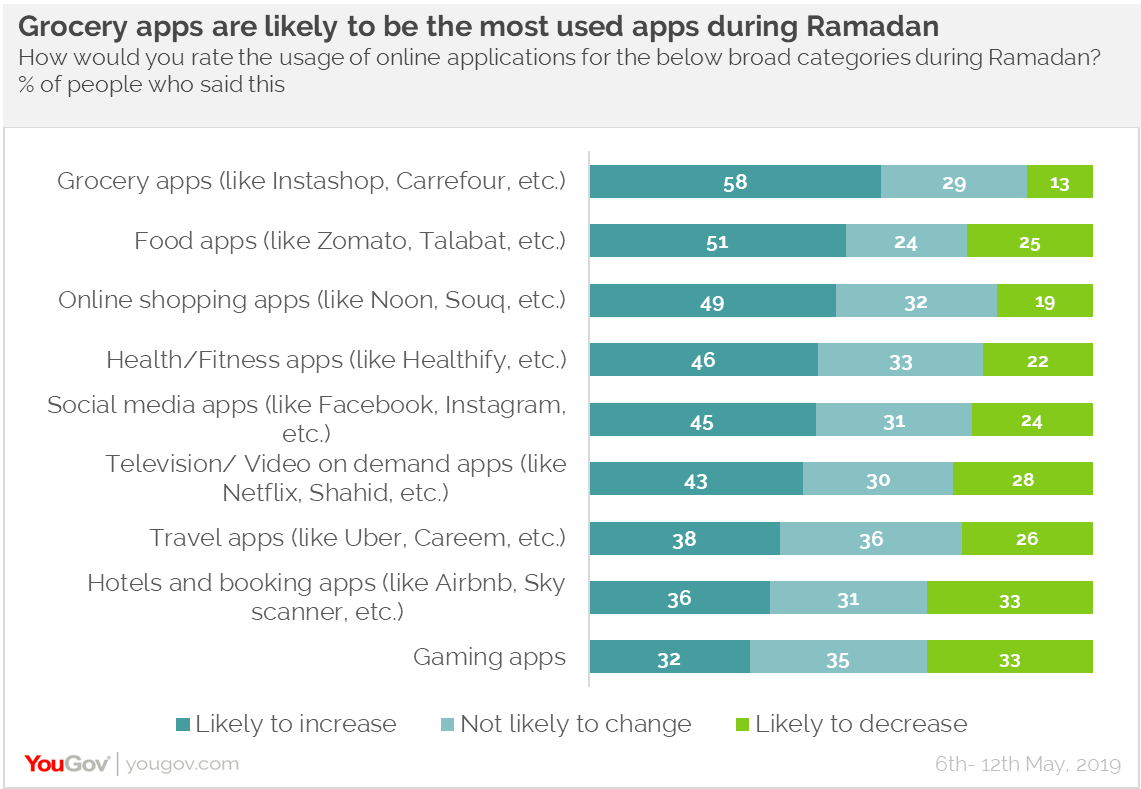 Residents are evenly divided about how their gaming app behaviour will change during the holy month. While a third of people (33%) think it will decrease, about as many (32%) believe it will increase, while around the same proportion (35%) reckon it will remain unchanged.

Two-third UAE respondents (66%) are currently fasting, with observance levels higher among men than women (72% vs 55%).

YouGov’s data shows that the usage of grocery apps is likely to increase more among the fasters during Ramadan. However, for most of the other kinds of apps, usage is slightly higher among non-fasters but there is a noticeable difference when it comes to travel apps (47% among non-fasters, 33% among fasters) and hotel booking apps (44% vs 32%).

When viewed across genders, the usage differences of these apps are even more defined. Men are more likely than women to think their use of health apps (48% men vs 42% women) and gaming apps (35% men vs 28% women) will increase during Ramadan.

Data collected online by YouGov Omnibus among 1,008 respondents in the UAE between 6th and 12th May 2019 using YouGov’s panel of over 6 million people worldwide. Data is representative of the adult online population in the country.