Domino’s Pizza’s new digital adverts around having a safe Eid and introducing their new delivery rates have helped the brand achieve the greatest uplift in Ad Awareness in Saudi Arabia in the month of June. Whilst most brands were coming off the back of their Ramadan campaigns and so saw declines in their Ad awareness scores during the course of June, Domino’s had three ads running, two of which carried the tagline “Calamity-free Eid” and the third which promoted their new delivery promotion prices of 11, 22, and 33 SR for small, medium and large pizzas, respectively.

Results from BrandIndex, YouGov’s daily brand tracker, show that these campaigns which ran in June 2019 had the desired effect in terms of cut-through. The brand’s Ad Awareness (whether someone has seen an advert for the brand in the past few weeks) rose from 13.8 in early June to +20.8 by the 28th June – an uplift of 7.0 points during June. 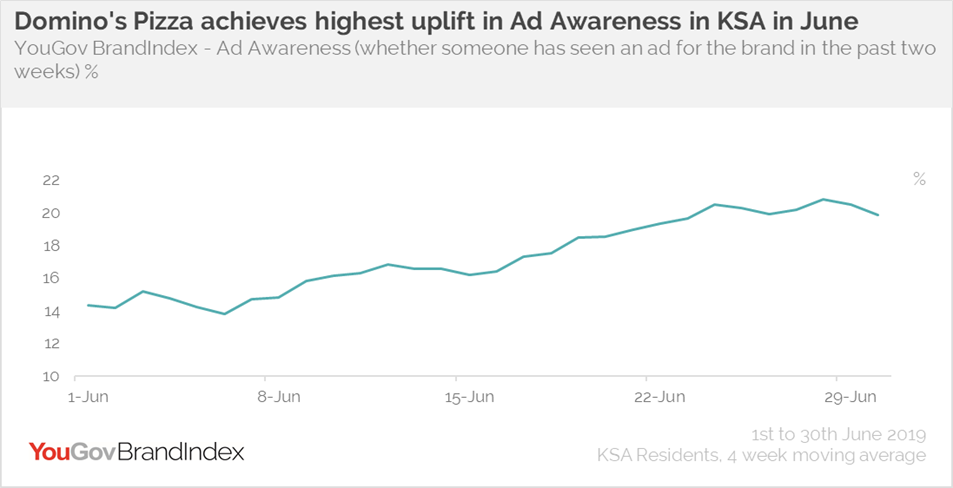 In terms of changing behaviour, Consideration for the brand has remained relatively stable in June but Purchase intent (which brand they are most likely to purchase from the next time respondents are buying food or drinks) saw an uplift up from 2.5 to 3.4 at its peak but finishing the month on 3.0. This indicates that the advertising helped Domino’s Pizza shift brand preference in the Kingdom throughout June. With BrandIndex, we can continue to track whether this trend continues for the foreseeable future.