Launch of the new iPhones 11, 11 Pro and 11 Pro Max and the associated ad campaign achieved the most cut through in terms of Ad Awareness in UAE, KSA and Egypt

Apple’s iPhone is the brand that achieved the greatest uplift in Ad Awareness in the UAE, KSA and Egypt in September. Apple recently unveiled its newest iteration of smartphones which went on sale on 20th September 2019.

During the course of September in the lead up to, and since launching, we see that Ad awareness for Apple iPhone has steadily increased across all three markets. The largest uplift was seen in the UAE market where Ad Awareness—the proportion of the sample saying they had seen some advertising for iPhone in the past 2 weeks—grew 10.2% from 41% to 51.2%.  Ad awareness in KSA and Egypt increased by 7.8% and 6.8%, respectively. In each market, these uplifts were the largest of any brand tracked. 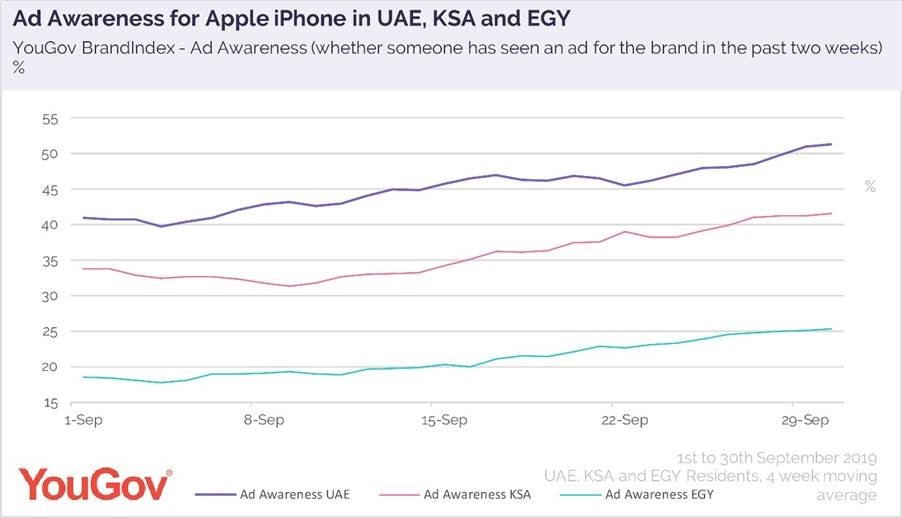 While the uplift in Ad Awareness demonstrates good reach for the launch campaign, the only market showing a notable uplift in terms of brand health, was Egypt (up 3.4 points in September). An uplift of 1.5 points was recorded in UAE whilst in Saudi Arabia saw a decline in brand health perception for iPhone of -2.3 points in September.  These results demonstrate that while the campaign achieved substantial cut-through, the new product messaging failed to resonate with regional audiences. 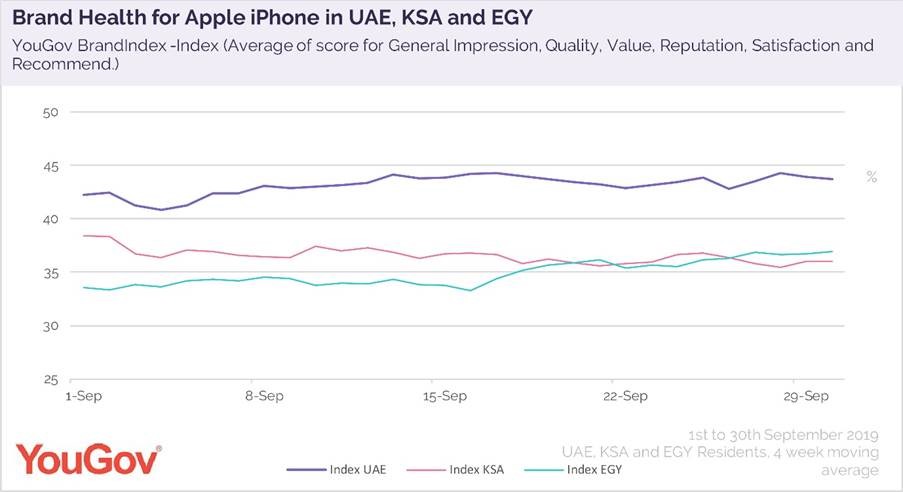 Worryingly for Apple, BrandIndex data show that Consideration for iPhone, which has historically shown positive spikes around new phone launches, has shown little to no uplift during the iPhone 11 launch campaign. Consideration scores in UAE saw a -0.1 percent change over the course of September, whilst in KSA it saw a 0.6 percent uplift. Egypt saw a -1.2 percent decline in the same time period.

The failure of this major handset launch campaign to boost either perception or consideration of the brand continues a similar trend for major handset launches over the past 2 years.  Neither Samsung nor Apple are driving the same sort of excitement or handset-envy they once did with a sequence of what are essentially small, iterative changes to an existing platform.  If the tried-and-true approach of faster, bigger, better screen, better camera has truly run its course, where will the smartphone giants turn next to ignite consumers’ passion?