These brands are the most advocated brands by consumers in the UAE, Saudi Arabia, and Egypt, respectively

The UAE’s flag carrier airline Emirates, Saudi’s payment network mada and smartphone giant iPhone are the most recommended brands by consumers in the UAE, Saudi Arabia and Egypt, respectively.

In the UAE, Emirates NBD has witnessed the greatest movement within the top 10 list and has climbed up four places to fifth in the 2019 rankings. Almarai seems to be winning back Saudi consumers after the price rise debacle last year and has moved up one place in the rankings to eighth this year.

Technology brands seem to have had a rather flat year in the UAE and Saudi, however, in Egypt the story is slightly different- with some technology brands doing well while others faring poorly. In the UAE, while iPhone and WhatsApp remain in the same spot this year as well- fourth and seventh, respectively, Apple has seen the worst decline among the top ten brands and has moved down five places to tenth in the 2019 rankings. Even Google has moved down three places to ninth this year.

In fact, in Saudi, iPhone and its parent brand, Apple has witnessed the greatest decline year on year. While iPhone slipped from third to fourth in 2018 and now seventh in 2019, Apple fell from second to sixth in 2018, and to ninth in 2019 rankings.

Only in Egypt does iPhone continue to hold the top spot. Google and YouTube have shown improvement and moved up one and two places in the 2019 rankings- to second and seventh, respectively. However, Netflix and WhatsApp have seen a decline this year and moved down two places each, to fourth and sixth, respectively.

This year’s rankings saw a lot of new brands enter the list of top 10 brands in each country. In the UAE, Carrefour has made a re-entry at sixth after falling out of the list last year while Singapore Airlines has made a fresh entry into the rankings at eight.

Majid Al Futtaim, Sentosa Island (Singapore) and IMG Worlds of Adventure (Dubai) were new entrants in the top 10 list of Saudi Arabia- at fifth, sixth and tenth, respectively. Majid Al Futtaim made an entry into the Egypt rankings as well- at third, along with Cairo Festival City at fifth and Kidzania at eighth.

YouGov also revealed the brands that have the most improved level of customer advocacy over the past 12 months. In the UAE, Pakistan International Airlines has seen the biggest improvement in its Recommend score this year, changing its score by 18.1 points. In Saudi, Mobily has recorded the greatest improvement (of 10.5 points) and in Egypt- Barclays Bank has achieved the biggest uplift (11.1) and has become the top improver in the country.

Chinese manufacturer Huawei seems to be making progress in the region. In the UAE, it is the third-best improver and in Saudi, it is seventh in the list of top 10 improvers in the country.

YouGov BrandIndex screened all of its 1437 brands in the region for their net Recommend score, which asks respondents "Would you recommend the brand to a friend or colleague?" and “Would you tell a friend or colleague to avoid the brand?” Only respondents who are current or former customers of a given brand are considered. Rankings data was collected between November 1, 2018 and October 31, 2019 and Improvers data was collected between November 1, 2017 and October 31, 2019. All brands must have a minimum N of 200 and have been tracked for at least 6 months to be included in the rankings and at least 6 months in the prior year's period (as well as being currently tracked) to be included among improvers. 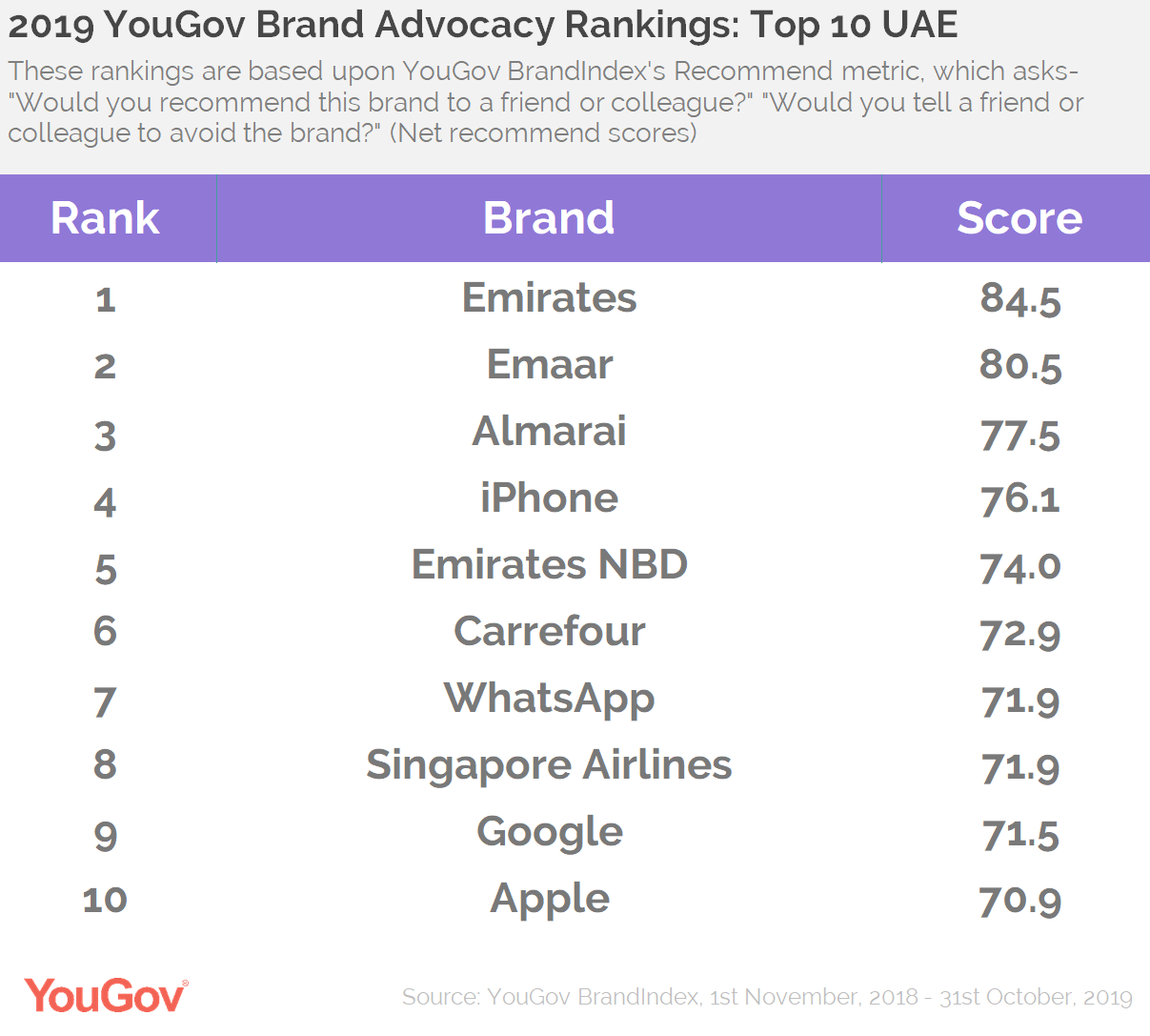 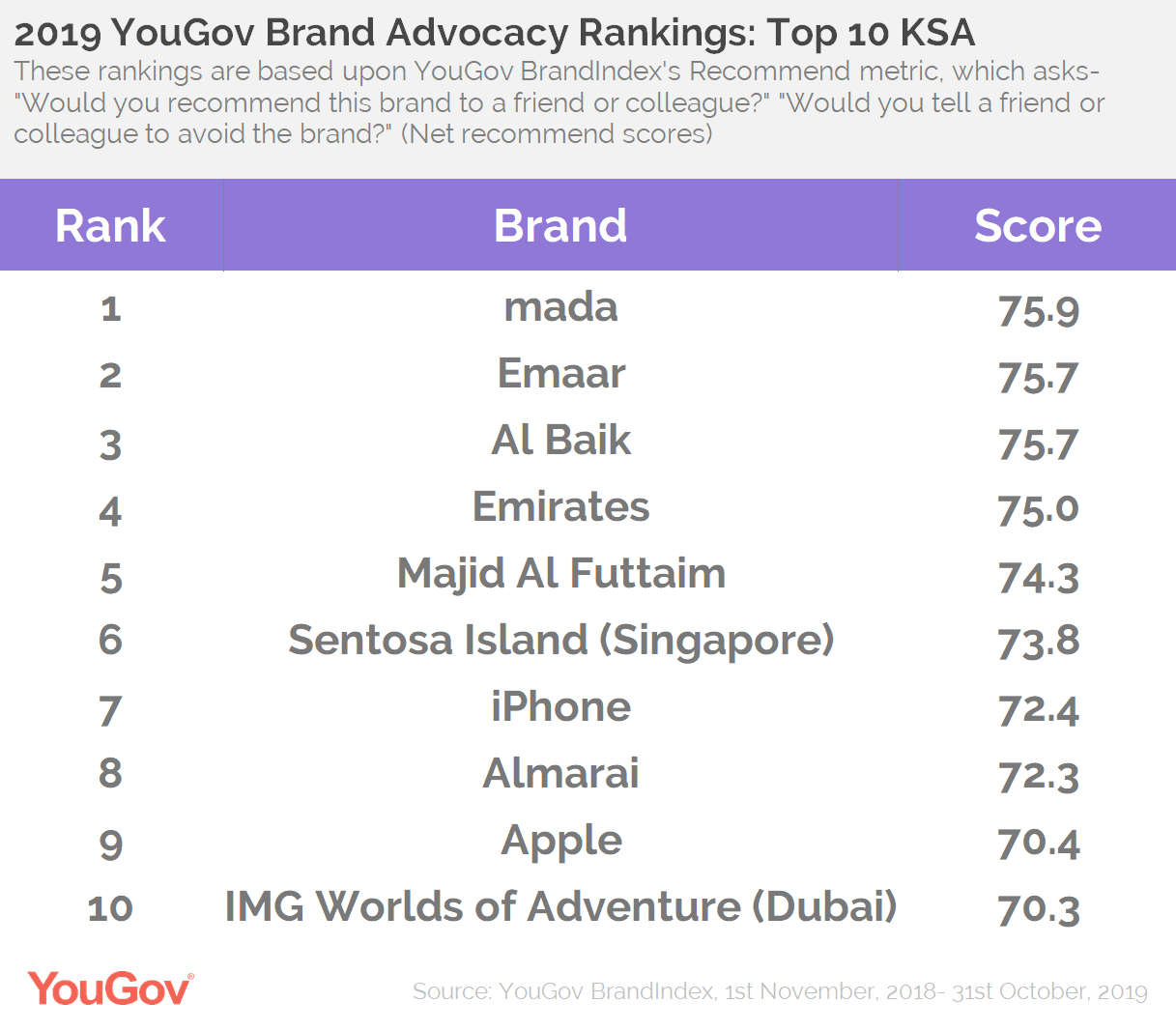 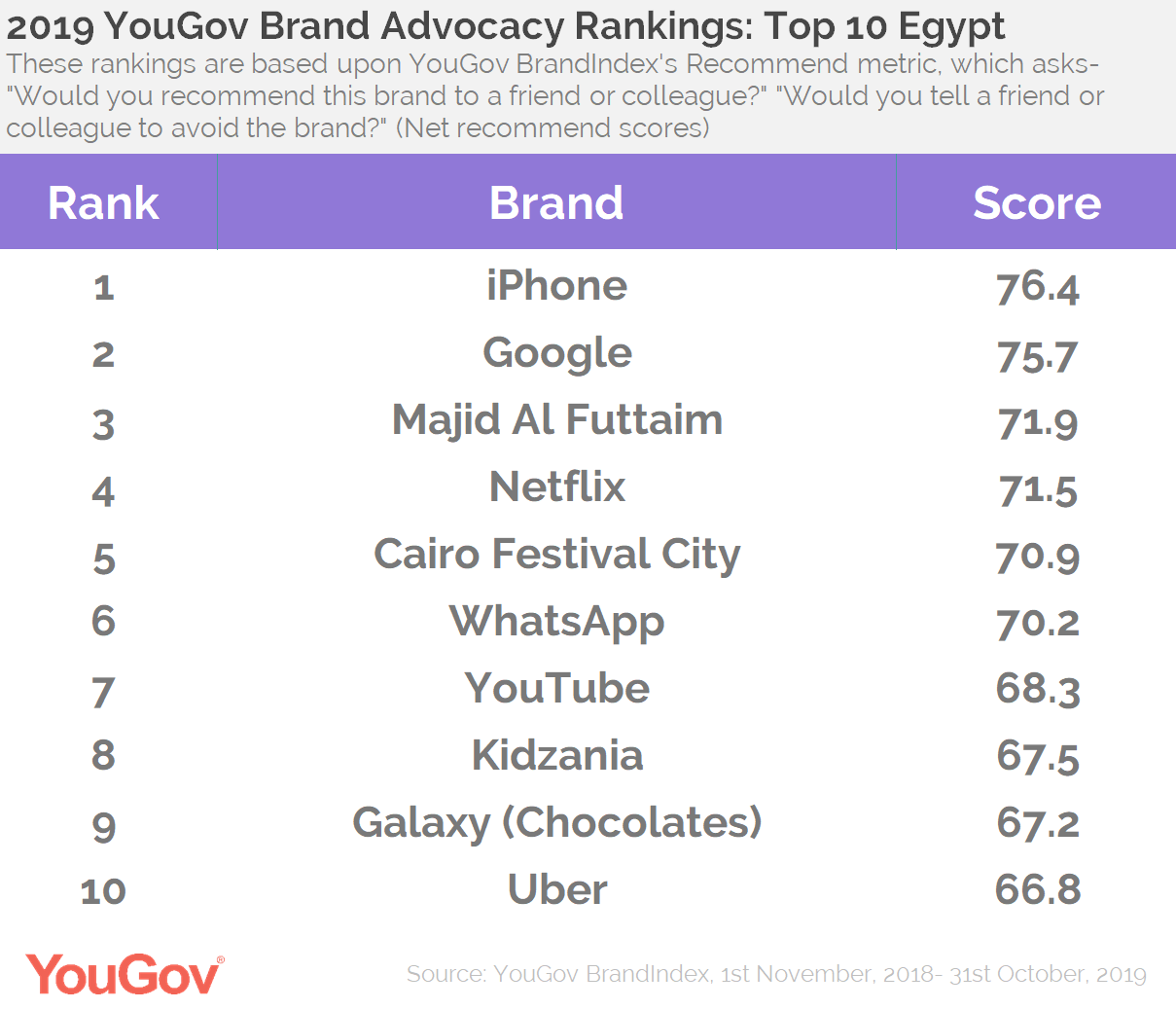