If it were easily available to them, half of UAE residents (49%) said they are likely to own a self-driving car in the next five years, close to a quarter (23%) are unlikely to do so and an equal proportion (23%) are unsure, YouGov’s latest research reveals.

By comparison, men are more inclined to own an autonomous car in the future than women, with 53% men saying this as compared to 42% women. 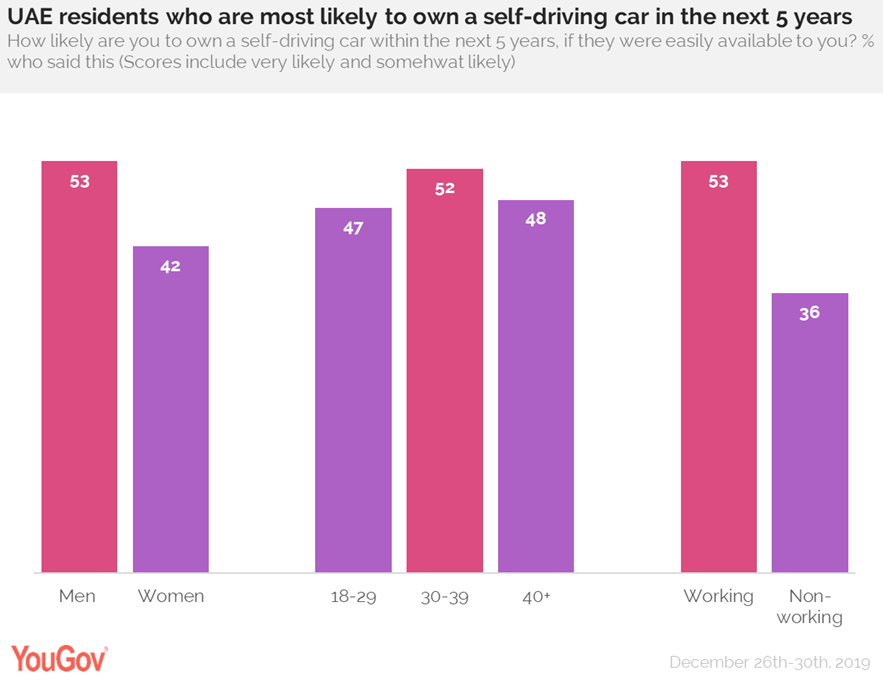 Amongst the various age-groups, people in their thirties (52%) are more likely than those under thirty (47%) and those aged 40 and above (48%) to possess one. Working professionals are also far more likely to own an autonomous car when compared to their non-working counterparts (53% vs 36%).

When it comes to safety, YouGov’s research shows that 43% feel driverless cars are safer than human-driven cars, 27% think they are less safe while 17% say they are just about the same. Again, men are more likely than women to consider autonomous cars safer than human-driven cars (47% vs 37%). Among those who feel self-driven cars lag behind human-driven cars in terms of safety, a majority (66%) suspect the technology backing the advancement and feel it could fail on the road. A similar proportion doubts the technology’s competency in spotting and reacting to sudden movements on the road (64%). A large proportion feels self-driven cars can’t spot hazards well (44%) and may pose a potential threat to pedestrians (44%). 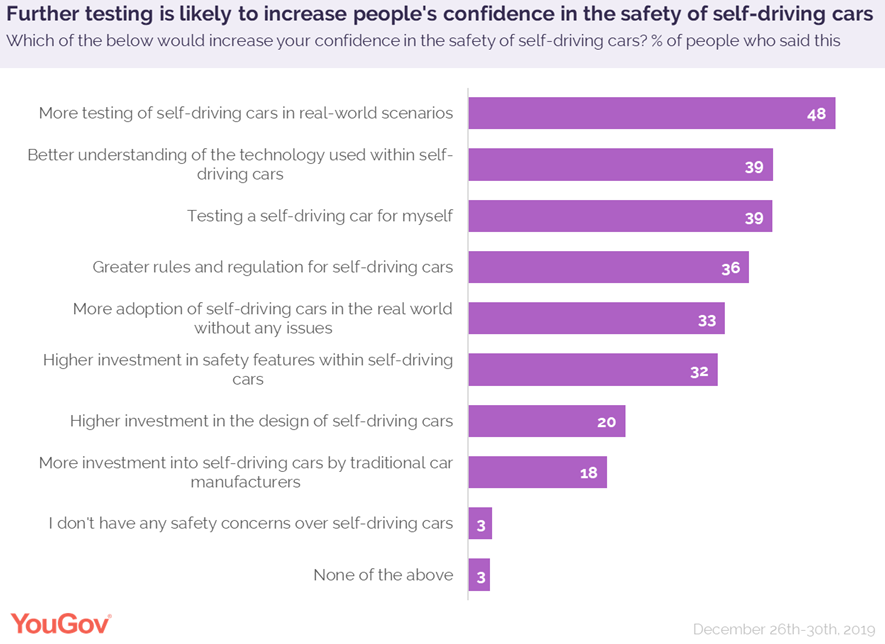 Two in five (39%) people said testing a self-driving car will strengthen their faith in them. Those aged between 35 and 39 years are more likely to say this than the rest of the generations. An equal proportion of people (39%) believes that a better understanding of the technology used for these cars will also reinforce their trust.

On the bright side, many believe in the benefits of an autonomous vehicle. More than two in five feel self-driving cars are more likely than human-driven cars to spot hazards in adverse conditions (42%) as well as spot dangers in the dark (42%). Almost as many believe they will be quicker to react to hazards than humans (40%) and will also reduce road traffic (39%).

Commenting on the results, Zafar Shah, Research Director, Data Services at YouGov MENA said: “Public sentiment and affinity to this disruptive innovation is not surprisingly varied as it goes through the new technology adoption lifecycle. As technology progresses, driverless cars are almost certainly the future of transport. The UAE is already expected to issue the final standards and regulations for autonomous vehicles this year which means this futuristic technology is a lot closer to reality than we think.”

Data collected online by YouGov Omnibus among 504 respondents in the UAE between 26th and 30th December 2019 using YouGov’s panel of over 6 million people worldwide. Data is representative of the adult online population in the country