These brands have generated the most positive Buzz among residents of the UAE, Saudi Arabia and Egypt

In the UAE, consumer electronic brands did not have a promising past year in terms of Buzz scores. While Samsung climbed up to the second position from sixth in the 2018 rankings, this year it has dropped down to third. On the other hand, its competitor Apple’s score has been declining year-on-year and after falling from fourth to sixth in 2018, it has further fallen down two positions, to eighth in the 2019 rankings.

Even in Saudi Arabia, Samsung and Apple had a tough year. While Samsung fell down two places to seventh this year, Apple slipped down one spot to eighth.

Similarly, Apple’s smartphone brand- iPhone noted declines in Egypt and Saudi Arabia. In Egypt, it moved down from sixth to eighth but in KSA it fell down four places to tenth in the 2019 rankings.

On the bright side, we see a surge in the popularity of YouTube in the region. The launch of YouTube Premium and Music in many Middle-Eastern countries last year seems to have been received well by consumers and has contributed to positive Buzz around the brand. In Egypt, YouTube is the third best brand in terms of positive Buzz. In the UAE and Saudi, it is placed in sixth in the top ten list of both the countries.

WhatsApp also has a presence in all three country rankings. In Egypt it retains its top position yet again. In the UAE, it has moved up one place to second, while in Saudi it has slipped down three places to fifth in this year’s rankings.

YouGov BrandIndex has also revealed which brands noted the “most improvement”. In the UAE and Egypt, content streaming giant Netflix has successfully struck a chord with consumers and is the “most improved” brand of the past year, with a rise of +12.1 and +6.0 points, respectively, to its Buzz score. mada soars to the top of the improvers list in Saudi Arabia, and has witnessed a rise of +6.9 points to its score.

Impressively, E-commerce brand Noon.com has shown great improvement in the region and has secured a spot in the improvers list in all the three countries. In the UAE and Saudi, it is the second best improver, and in Egypt it is fourth in the list of improvers.

Noticeably, Souq’s rebrand as Amazon.ae seems to have generated a lot of chatter among UAE residents, landing the brand a spot in UAE’s list of top ten improvers of 2019.

In Saudi, Almarai has recorded improvement following the price-rise debacle (with a change in score of +5.3) and regained its position on the top as the brand with the most positive Buzz in 2019.

The 1437 brands in YouGov BrandIndex were ranked using the Buzz score which asks respondents, “If you've heard anything about the brand in the last two weeks, through advertising, news or word of mouth, was it positive or negative?” Scores are net scores, calculated by subtracting the percentage of negative responses from the percentage of positive responses for each brand. 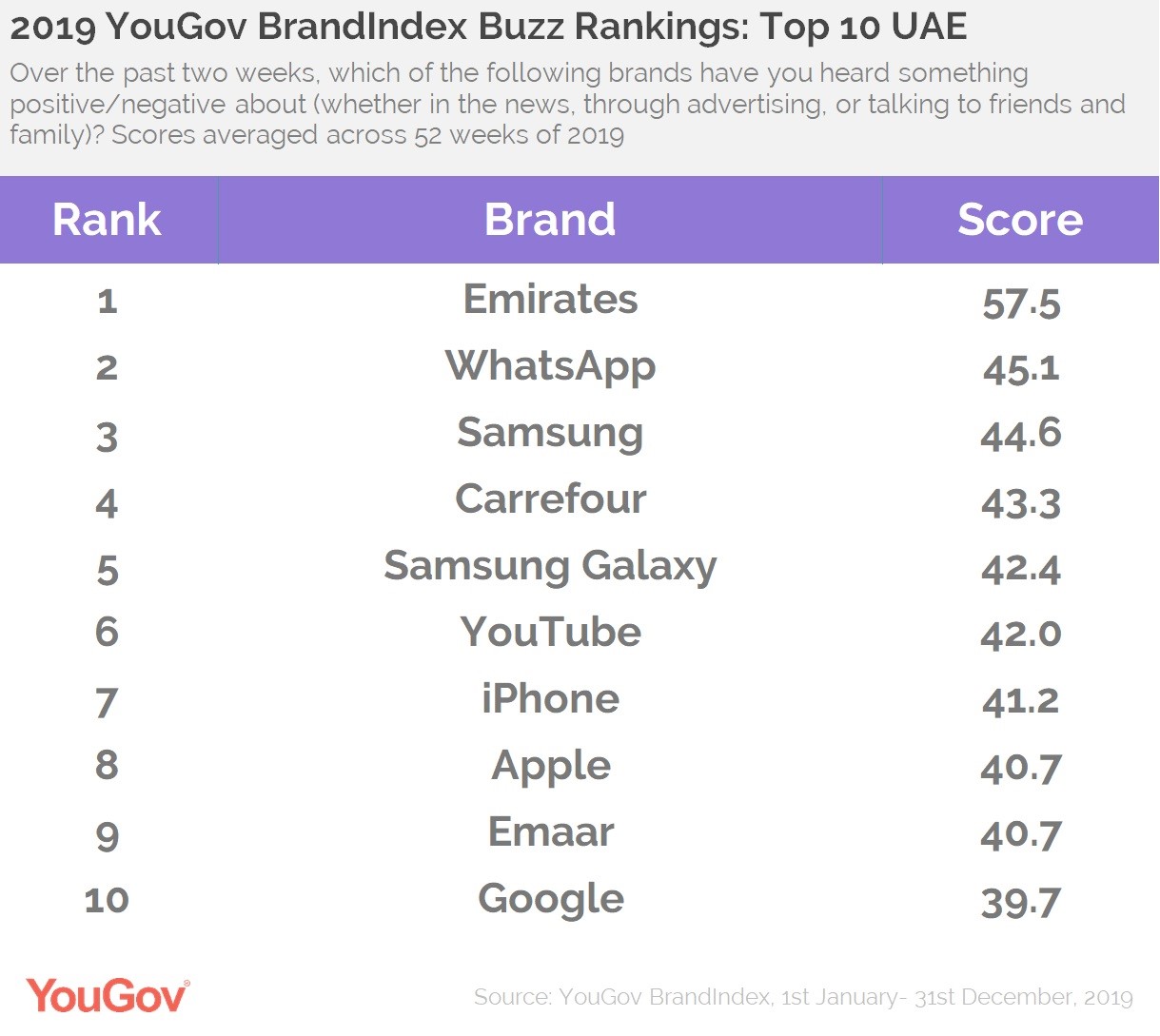 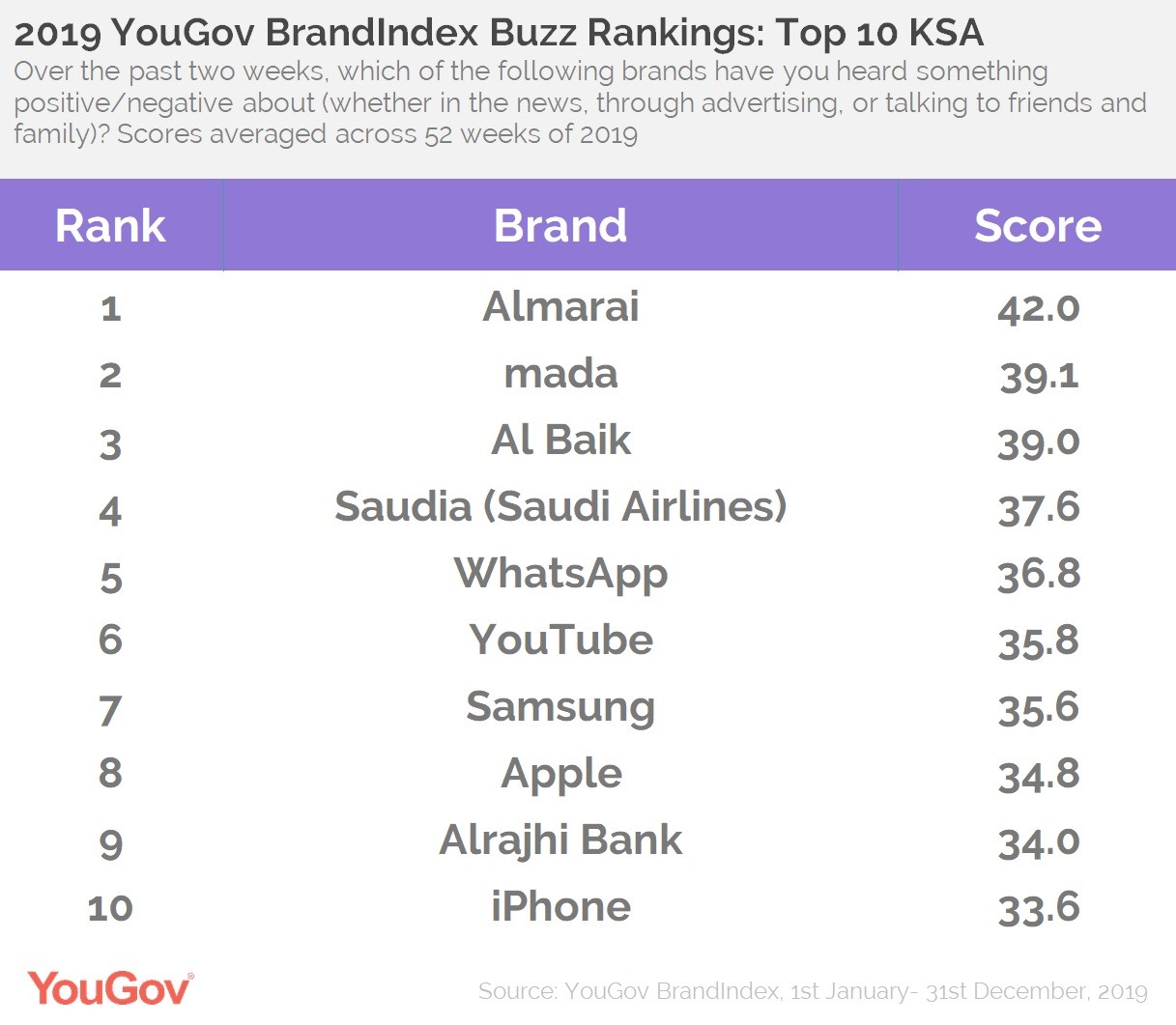 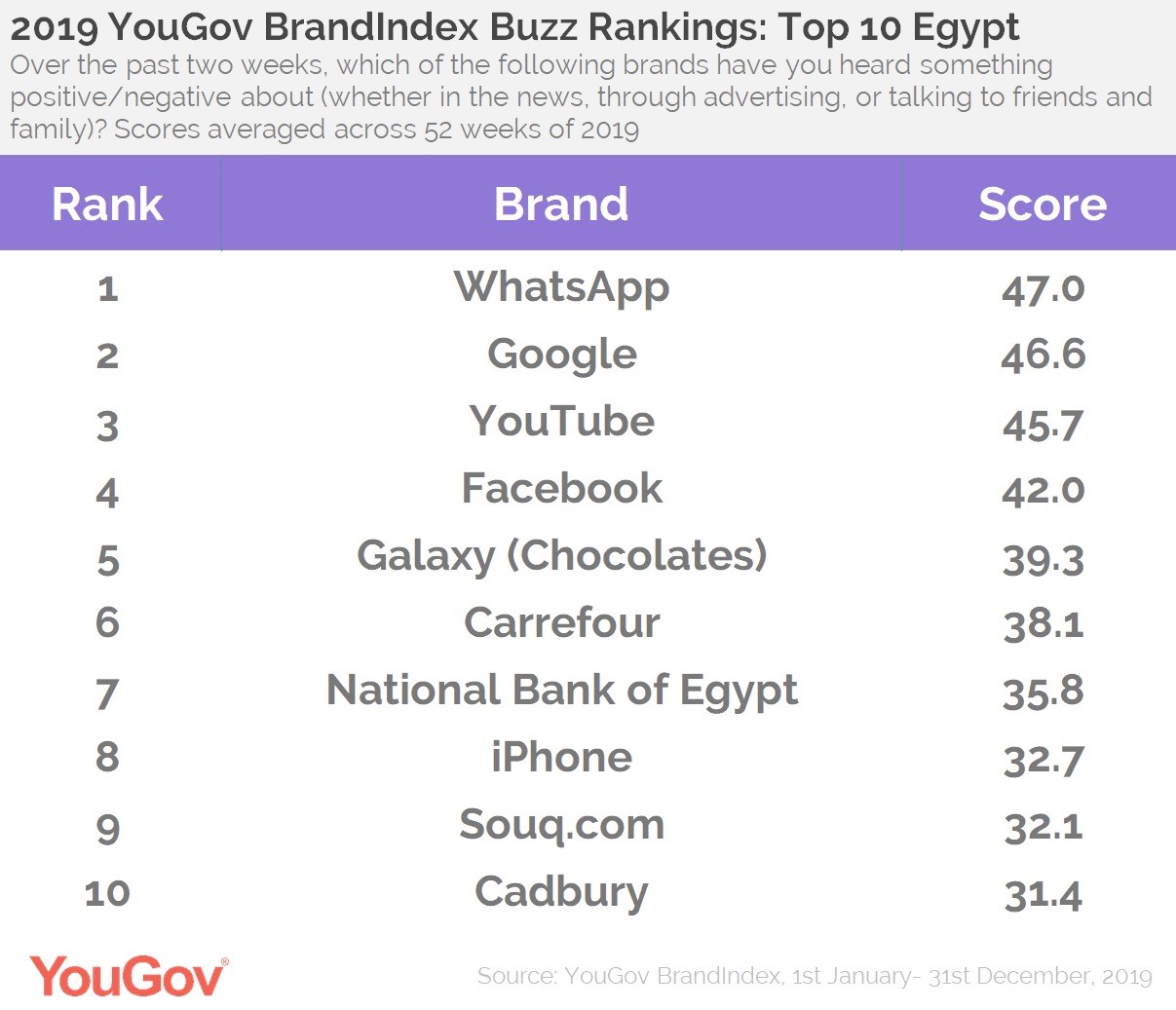