Almarai regains its top position among women in Saudi Arabia in the 2020 Women’s Choice Brand Rankings by YouGov. The leading food brand has replaced Apple, which has now moved down one spot to second in the list.

The rankings were compiled using the Impression score from YouGov’s daily brand tracker, BrandIndex, by asking respondents, “Overall, of which of the following brands do you have a positive/negative impression?” over the past 12 months. 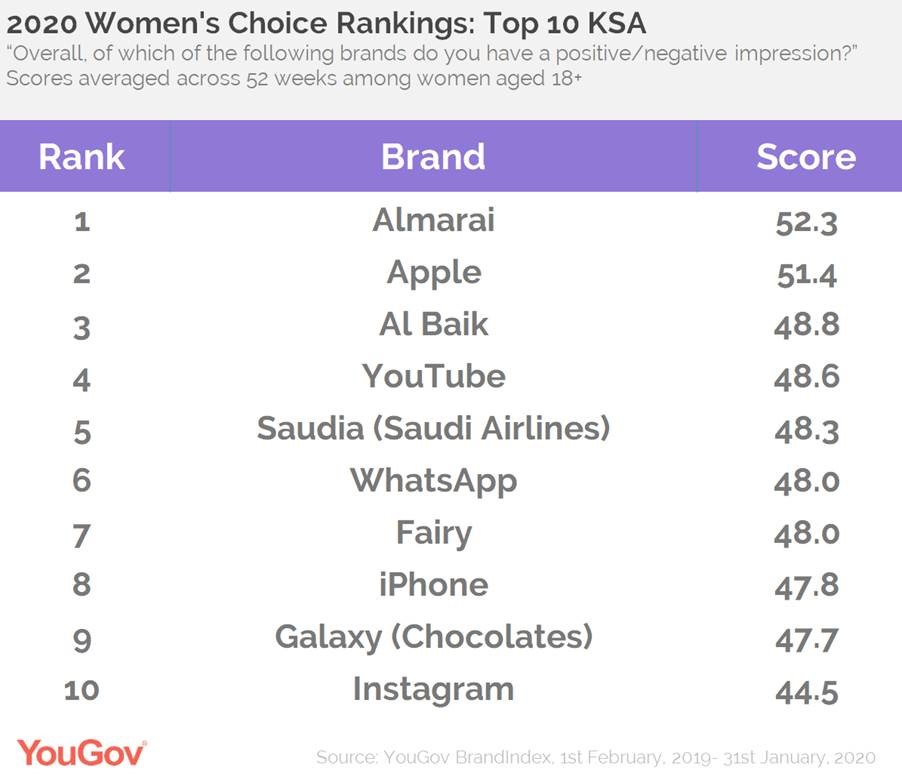 The last year saw Almarai continue a host of sponsorships, events and campaigns to engage consumers. The news of Almarai appointing a female Head of Investor Relations created a lot of noise around breaking workplace gender boundaries in Saudi Arabia. All of these events are likely to have strengthened the brand’s appeal amongst women and helped it claim back the top spot in the annual Women’s Choice Rankings.

Notably, a number of brands in the top 10 list have seen a decline in their net Impression scores among women year-on-year. Both Apple and the brand’s smartphone iPhone, have seen the greatest score declines among the top 10 brands, with this causing the iPhone brand to move down from second to eighth in this year’s rankings. Continuing this trend, WhatsApp has moved down two places to sixth this year. Al Baik remains in the same spot (ranked third), although it’s Impression score has also decreased over the past year.

On the other hand, YouTube has recorded positive improvement to its Impression score over the past year and has climbed up three places from seventh to fourth in the 2020 rankings. The launch of YouTube Music and YouTube Premium last year is likely to have had a positive effect on the brand’s perception among women in the country.

Fairy and Galaxy (Chocolates) have both moved up one place, to seventh and ninth, respectively. Saudia (Saudi Airlines) makes an impressive entry into the list (in fifth), with a strong improvement in Impression score year-on-year, and Instagram re-enters the list in tenth after falling out of it last year.

YouGov also revealed the 10 brands that made the largest improvement to their Impression scores over the past 12 months. mada is the most improved brand of the past year among women, yet again, with a change in score of +7.8, going from an Impression score of 34.7 in last year's YouGov BrandIndex Women's Rankings to 42.6 this year.

Chinese tech giant Huawei has witnessed a surge in its popularity amongst women, making it the second best improver of 2020, also with a change in score of +7.8. 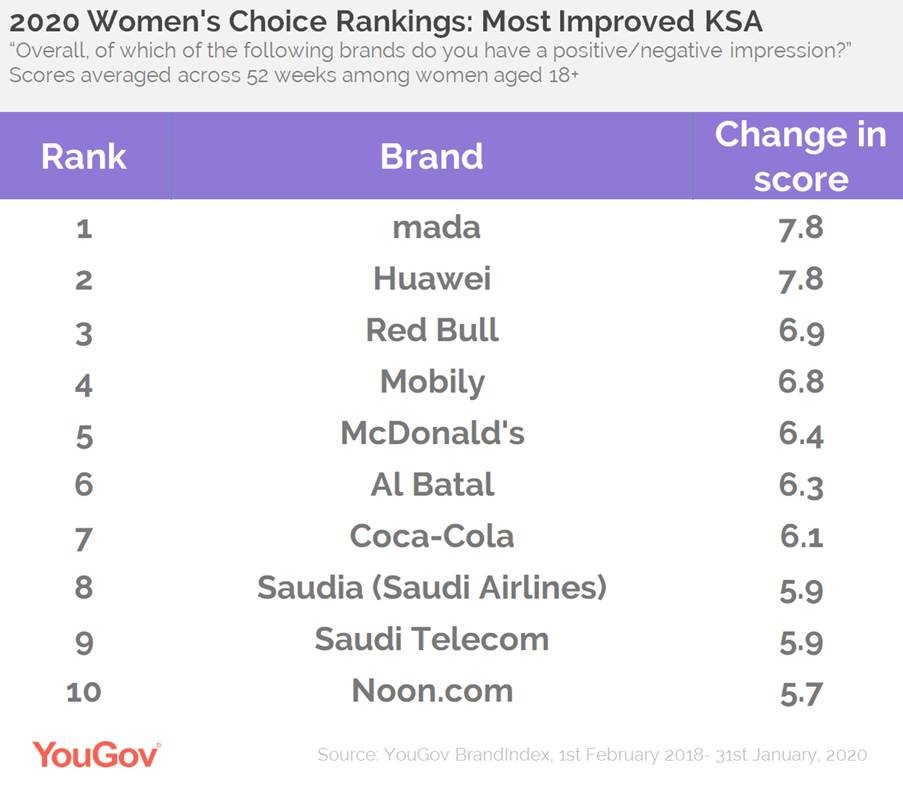 Food and beverage brands seem to be faring well with women consumers in Saudi Arabia. Brands such as McDonald’s (+6.4), Al Batal (+6.3) and Coca-Cola (+6.1) are part of the 2020 top improvers list, along with Red Bull (+6.9), although it should be noted that Red Bull still records a negative net Impression score (-10), but has improved year-on-year (up from -16.9 in the previous rankings).