Emirates tops the 2020 YouGov Women’s Choice Rankings in the UAE for the fourth time in a row, this year receiving the highest Impression score of +70.4 among women in the country.

The Rankings were compiled using the Impression score from YouGov’s daily brand tracker, BrandIndex, by asking respondents, “Overall, of which of the following brands do you have a positive/negative impression?” over the past 12 months.

Emirates has dominated the YouGov BrandIndex Women's Rankings since 2017. Last year it paid tribute to its female employees on the occasion of International Women’s Day through a video that celebrates the diversity of its female staff and highlights the varied roles held by women across the company. The airline giant’s impressive campaigns may be one of the reasons for the strong positive Impression held by women consumers in the UAE.

Notably, the majority of brands in the top 10 have seen their net Impression scores decline amongst women year-on-year. Technology brands WhatsApp and Apple both showed a decline in their ranks and their Impression score this year.  WhatsApp slipped from second to third and Apple declined in rank year-on-year, from third in 2018 Women’s Rankings, to fourth in 2019, and now sixth in2020.

iPhone and Almarai remain in the same spots this year—eighth and ninth, respectively—however their Impression scores have decreased over the past year.

The appearance of weakening scores is true even for brands who have seen their ranking improve this year. For instance, both Samsung and Carrefour have moved up one place, to fourth and second in the 2020 Rankings, despite their Impression score declining over the past year. The reason for this is other brands in the top 10 list declining at a greater rate.

Emirates and YouTube, stand as exceptions to this trend and have both noted slight improvement to their Impression score among women over the past year. The launch of YouTube Music and YouTube Premium last year may be one of the factors impressing women in the country, taking the brand up five spots from tenth to fifth in this year’s list.

Global Village and IKEA both make debuts in the list—at seventh and tenth, respectively—with both brands seeing an increase in their Impression score year-on-year.

YouGov also revealed the 10 brands that made the largest improvement to their Impression scores over the past 12 months. Netflix is the most improved brand of the past year among women with a change in score of +11.7, going from an Impression score of 23.4 in 2019 to 35.1 in 2020.

Apart from offering a diverse range of global content, the OTT giant introduced a few Middle eastern original series in Arabic last year. The brand’s strategy of introducing original and localised content seems to be winning women consumers in the country and this could be one of the reasons for its improved Impression score in the past 12 months. 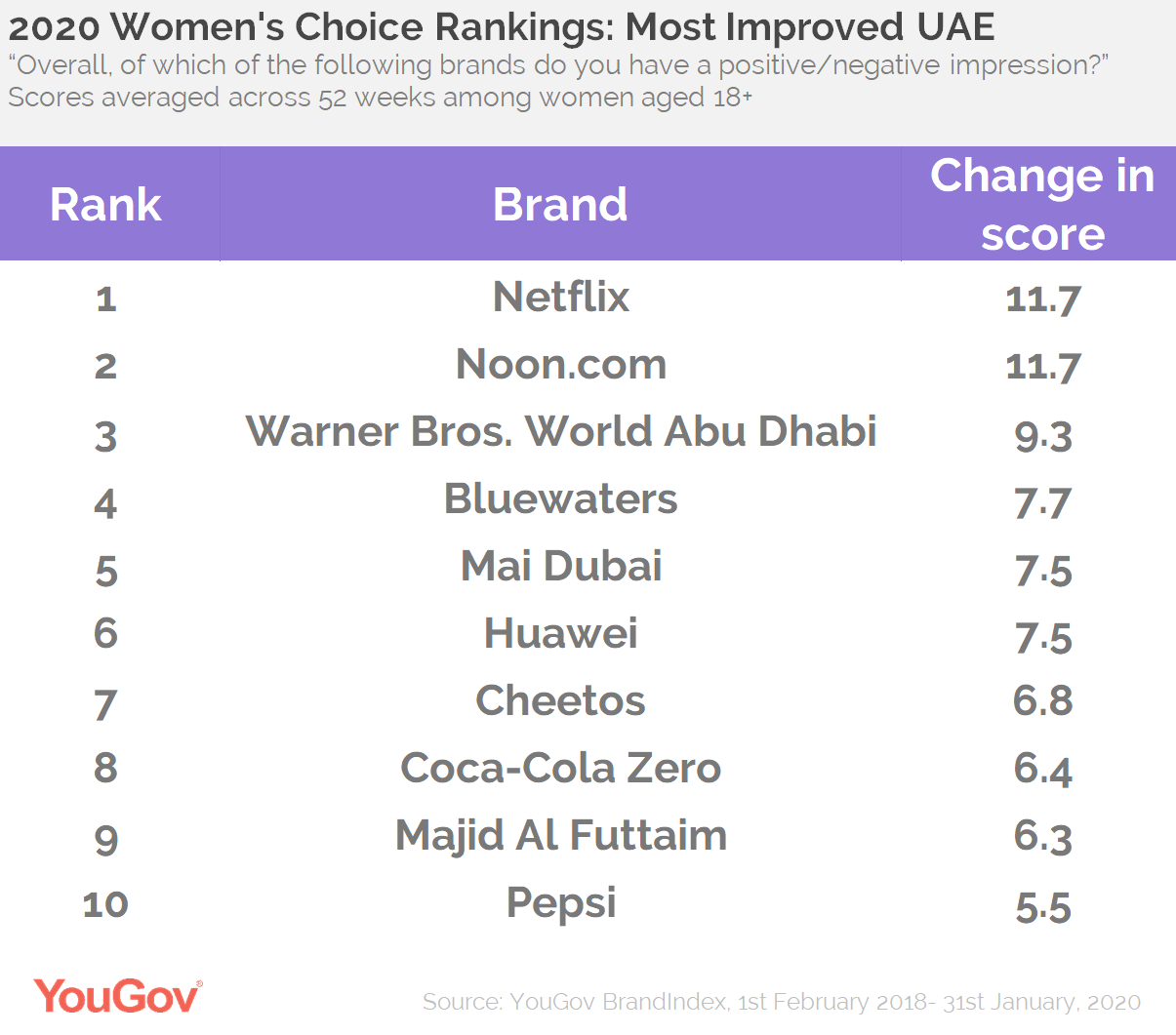 Noon.com is the next most improved brand, also with a change in score of +11.7. Leisure and Entertainment destinations such as Warner Bros. World Abu Dhabi (up by +9.3) and Bluewaters (+7.7) seem to be resonating well with women in the UAE and have recorded great improvement.

Further down the list, food and beverage brands such as Mai Dubai (change in score of +7.5), Cheetos (+6.8), Coca-Cola Zero (+6.4) and Pepsi (+5.5) are impressing women in the country, thereby driving up their scores year-on-year.

Chinese handset manufacturer Huawei (+7.5) and Dubai based holding company Majid Al Futtaim (+6.3) have also made improvements to their scores and complete the list of the top ten improvers of 2020.