Half of working residents in the UAE claimed supporting their family financially is a goal they have set for themselves this year. This goal is more important to adults who are 25+ years in age as compared to their younger counterparts.

Apart from providing family support, saving for retirement (34%) is a goal for a third of working residents, and for another third feeling financially secure (34%) is a target for the year.

People aged 45+ years were more likely to prioritise saving for retirement as an annual goal as compared to those between 25-34 years (42% vs 29%).  For these young adults, ‘starting a business’ and ‘buying a home’ rank higher in priority, at 37% each.

Following the goal of supporting their family, a considerable number of women have set a target of sticking to a monthly budget which is notably higher than the number of men claiming to do so (39% vs 30%). Similarly, more women than men have resolved to take a dream vacation this year (33% vs 25%).

The data shows that people’s financial goals are in line with their priorities. Not only is financially supporting their family a top goal among working residents, it also happens to be the top expense area for a majority after paying all fixed monthly bills. In this regard, 57% residents allocate monthly funds for family which includes remittances or supporting their spouse and kids. However, this expense is less of a priority for Western expats as compared to Asian and Arab expats.

For close to half (47%) ‘saving and investment’ is a priority after fixed monthly expenses are taken care of.  Although 62% are likely to save for the future if they were to discover some extra money (through bonus, gift, etc.).

When trying to save money, three in five (59%) cut down on impulsive shopping in order to manage their finances. Half sacrifice eating out or ordering in (50%), and for 44% entertainment activities take a backseat.

When it comes to their finances, a majority of UAE working residents seem to be confident about handling money and display financial prudence. About three-quarters agree with the statement ‘I have a good understanding of money management’. 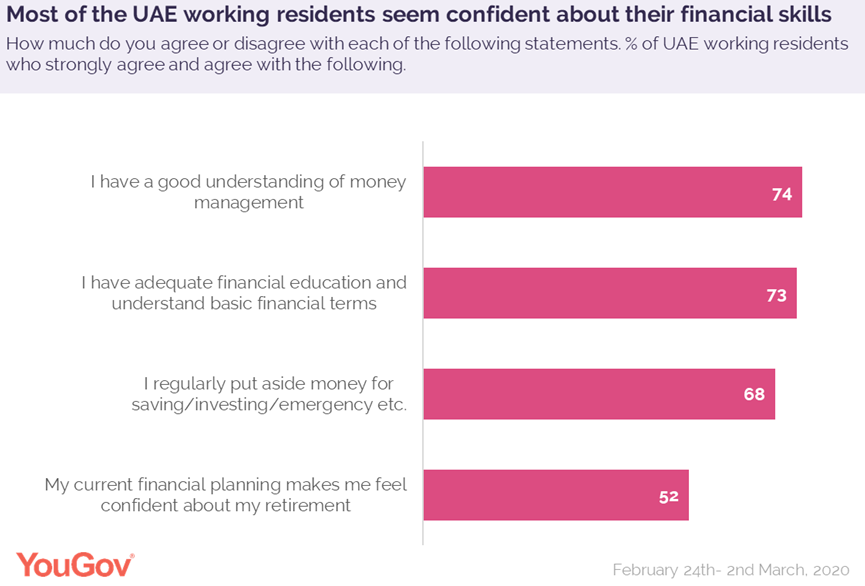 Furthermore, a large proportion (68%) are financially cautious and regularly put aside money for the purpose of saving, investing or for rainy days.

Even though income earners take steps to be financially safe, just over half (52%) feel confident about their financial planning for retirement. Notably, Emiratis are much more confident about retirement when compared to other nationality groups in the country (with 74% saying this).

Data collected online by YouGov Omnibus among 813 respondents in the UAE between 24th February and 2nd March 2020 using YouGov’s panel of over 6 million people worldwide. Data is representative of the adult online population in the country.