New data from YouGov’s COVID-19 tracker (25th- 31st March) shows that the level of fear among residents in the UAE and KSA about contracting the novel Coronavirus has stabilized over the past week and 72% now say they are very or fairly scared about contracting it, up marginally from 69% last week. 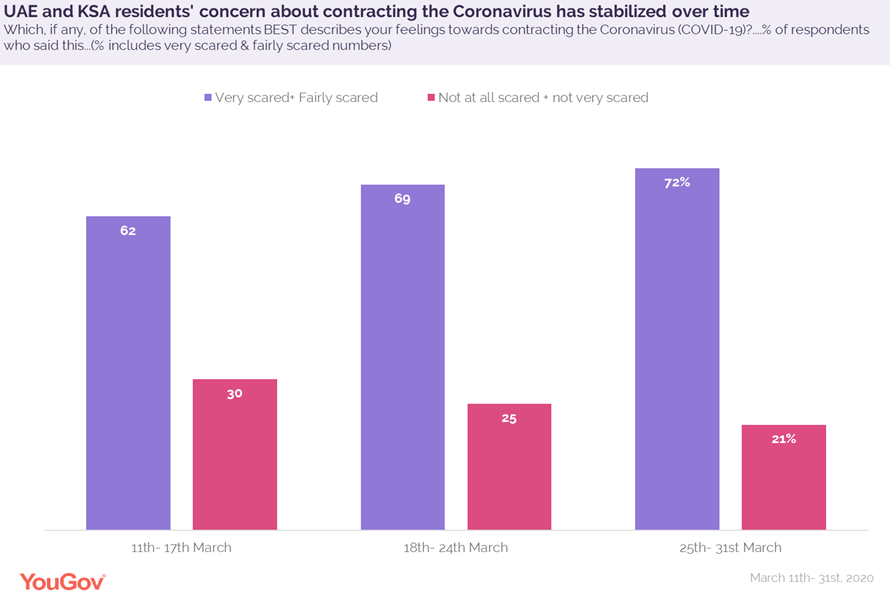 It seems that the Emiratis in the UAE are most concerned, with 83% saying they are very or fairly scared about getting infected, compared to 79% saying this last week. Arab expats in the country are also more anxious- at 79%, up from 76% last week.

In KSA, anxiety has remained stable for both Saudis and expats, but the latter continue being more worried than the locals - with 78% saying they are very scared or fairly scared.

Although in the past few weeks we observed that KSA residents were more afraid of contracting the disease as compared to people in the UAE, the markets have stabilized around the same level this week- 73% and 72%, respectively.

The number of people in both the countries who say they are not very scared, or not scared at all, has fallen further to 21% - down from 25% last week.

As the reality of the situation has set in, we see increasing proportions of residents taking precautionary measures to protect themselves against the Coronavirus. 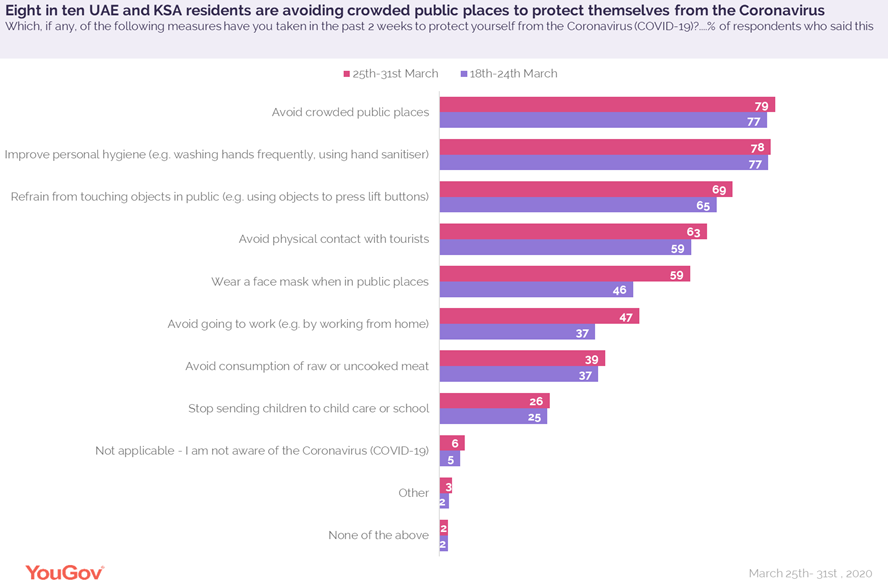 ‘Avoiding crowded places’ remains the top measure taken by people in order to protect themselves from the virus (as said by 79%), closely followed by maintaining personal hygiene (78%). A higher number of women than men are following both these practices.

Other behavioural changes include ‘wearing a mask in public’ and ‘avoiding going to work (working from home)’ and the number of people taking these steps have increased notably, from 46% and 37% last week, to 59% and 47%, respectively, this week. It is unsurprising to see the proportion of residents working from home grow as government calls for the public to stay at home have intensified.

Residents aged 45+ in both the countries continue being more cautious and are much more likely to observe almost all precautionary measures as compared to people from the other age groups.

Awareness about Coronavirus remains high at 94%. The level of information about handling the situation has improved marginally, with 78% saying they are well informed about what to do if they suspect they have the Coronavirus, up from 76% a week back. UAE residents are still ahead of KSA residents in this regard (82% vs 75%).

The increasing number of confirmed cases led the government in both the countries to enforce curfews and lockdowns in many cities. This explains why perhaps the number of people stockpiling essential items such as food, medicines, etc. has increased from 36% to 44% this week. The decision to avoid crowded places could be another reason for wanting to secure oneself with items of necessity.

YouGov will continue tracking and providing a round-up of the most noteworthy changes in the data over the previous seven days.

Data collected online by YouGov Omnibus among 2028 respondents in the UAE and Saudi Arabia between 25th and 31st March 2020 using YouGov’s panel of over 6 million people worldwide. Data is representative of the adult online population in each country.