In addition to this, most residents think the pandemic will incur long-lasting damage to their respective economies

The latest data from YouGov’s survey run between 8th- 15th April shows an increasing number of people in the UAE and KSA are concerned about the loss of job or salary due to the ongoing Coronavirus crisis. The proportion of respondents who said this has increased from 44% to 51% this week. Notably, UAE residents are much more worried about this outcome as compared to people in KSA (64% vs 38%).

In both the countries, concern over job loss was seen more among expats than locals. In the UAE, Western (74%) and Asian expats (68%) appeared more nervous about this scenario as compared to the Emiratis (46%). Similarly, in KSA, expats are more anxious about losing their livelihoods than locals (56% vs 30%). 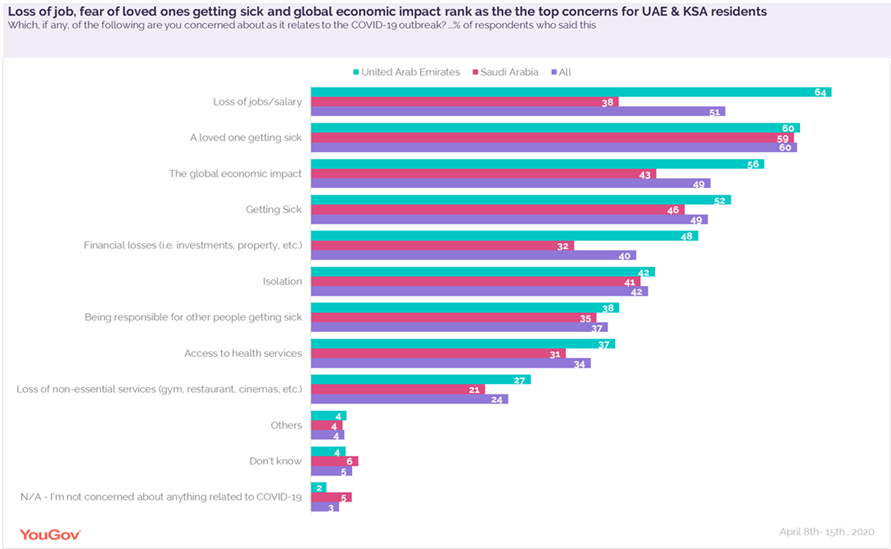 For most of the listed areas, concern is more widespread among UAE residents as compared to KSA residents, especially in matters relating to finance and economy. 56% UAE residents are nervous about the global economic impact of the pandemic, however, concern among KSA residents is lower- at 43%.

In addition to this, UAE residents are also more likely than those in KSA to worry about other financial losses such as money put in investments, property, etc (48% vs 32%).

Even though half are worrying about jobs and the economy, the thing that currently concerns most people in the two countries is a loved one getting sick due to the virus. The number of people saying this has increased from 56% to 60% this week. Those respondents who are married with children are the most worried about this outcome (63% saying this).

Thinking about the impact of the Coronavirus, more than half of UAE and KSA residents (54%) said the pandemic will have a long-lasting damaging impact on their respective country’s economies, up from 50% who said this last week. 38% on the other hand, think the impact will be short-term. Although there has been an increase in the number of people who foresee a lasting adverse impact on the economy in both the countries, UAE residents are more likely to expect this outcome as compared to KSA residents (59% vs 49%). 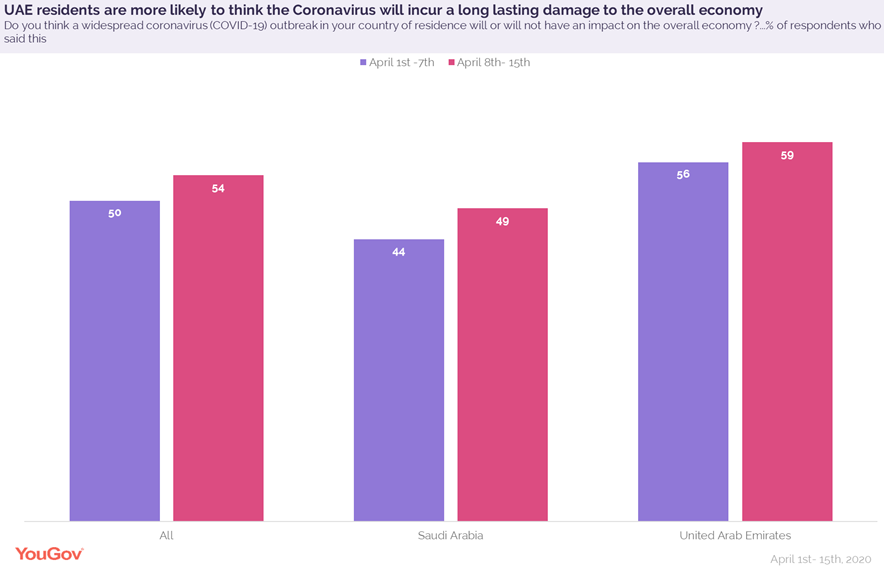 Roughly half the public in both the countries (49%) believes jobs and employment, as well as their wages (46%), will suffer over a prolonged period of time.

On the other hand, residents are expecting a short-term negative impact on the price of essential items (45%).  For household finances their opinion stands divided, with 42% saying the impact will be long term while 43% saying it will be short-lived.

The data shows that people aged between 25-34 years continue being the most pessimistic about the likely outcomes of the Coronavirus and for all areas tested they were more likely than their counterparts to say the pandemic’s damage will be long-lasting.

Data collected online by YouGov Omnibus among 2001 respondents in the UAE and Saudi Arabia between 8th and 15th April 2020 using YouGov’s panel of over 6 million people worldwide. Data is representative of the adult national population in each country.