With the new Value Added Tax coming into effect in Saudi Arabia recently, YouGov’s latest survey reveals nine in ten (91%) residents claim to be financially affected by the increased tax rate in the country. Out of these, 61% said they have been affected severely, while 29% felt a minor impact of this move on their finances.

Working residents seem to be more strongly influenced by the new tax rate than the non-working population (95% vs 86%). Similarly, respondents within the income bracket of SAR 5,001- 20,000 were more likely to say the increase has affected them (at 96%) than households belonging to other income groups. 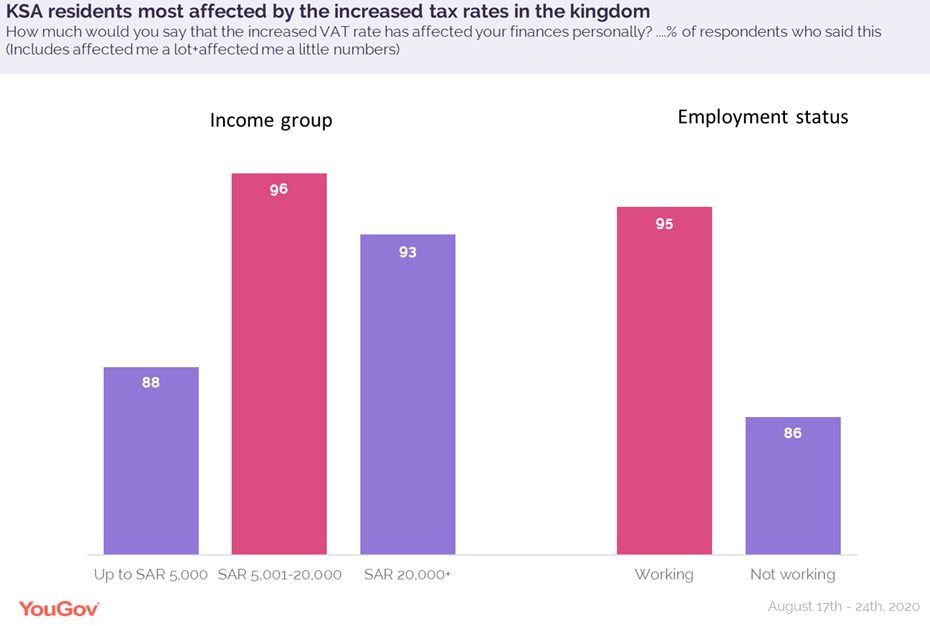 When specifically asked about the implications of the new VAT rate on their business, 77% of respondents working in senior management positions reported a negative impact. Only 16% felt no impact of the tax rise, while a very small number (7%) said it had a positive effect on their business.

Not only their personal monetary situation, the KSA public foresees an adverse effect on the country’s financial position as well, with half (50%) stating the tax jump might negatively affect the economy. On the other hand, just one-in-five (22%) are hopeful it might have a ‘very or somewhat’ positive impact on the country’s economy.

In order to adjust to the new tax regime, around half (51%) of the respondents have limited their purchases to only those items that are necessary, while 45% have started buying cheaper alternatives. Some (37%) have postponed their plans to purchase certain goods while others intend to buy these items through international e-commerce sites (19%) or during their travel trips abroad (11%).

At an overall level, residents seem to have reduced their spending in all the listed categories in the past few days because of the increased VAT. The main areas where people have cut down their expenses are clothing (56%), dining out (51%), electronics (50%) and luxury items (49%). Nearly half (48%) claim to have reduced their overall personal expenditure. 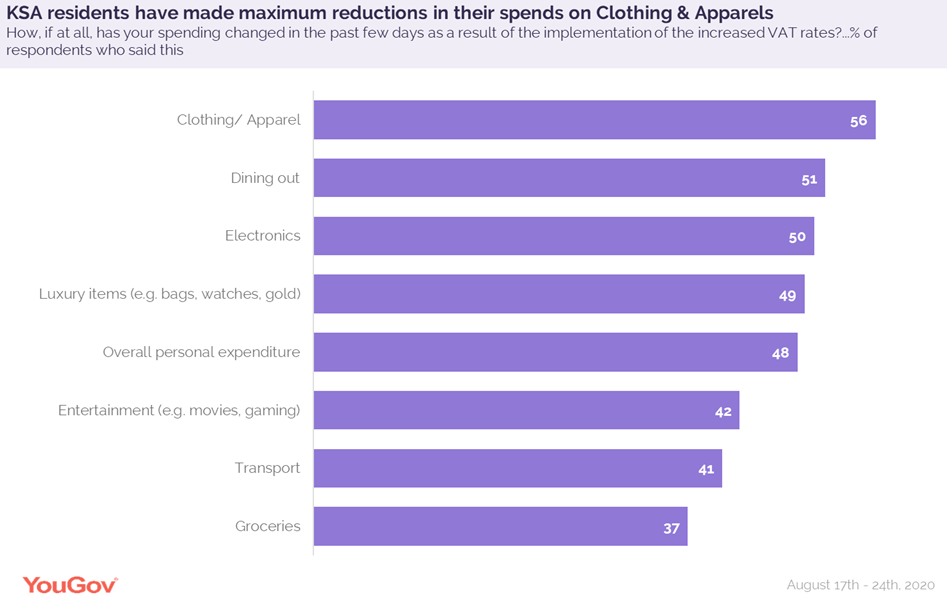 Many have cut back expenses on entertainment (42%) and transport (41%), but spends on groceries have witnessed the least reduction comparatively (37%). It appears residents are giving more preference to essential items than leisure or luxury products, and therefore spending has changed to suit their current needs.

In terms of understanding the new VAT implementation, 45% of Saudi residents said it was easy for them to understand it, while a small proportion (20%) said it was difficult to comprehend.

A similar proportion of respondents claim to understand its impact on products/ services- with 43% finding it easy and 19% saying it was difficult to comprehend. Only 39% claim understanding of the new VAT’s implication on businesses was easy, while 20% found it difficult.

YouGov Omnibus data collected online among 1002 respondents in the KSA between 17th and 24th August 2020 using YouGov’s panel of over 6 million people worldwide. Data is representative of the adult national population in KSA.