The Middle East is a fast-growing gaming market, evolving from casual gaming to virtual reality games and competitive sports. With a growing community of active gamers and a high internet penetration, Gaming & Esports industry in MENA is likely to witness a boom in the future.

YouGov’s new white paper, titled ‘Gaming and Esports: The Next Generation’, provides an analysis of the global video games and esports landscape across 24 markets.

Our data shows, for an important sub-section of players, watching video games online has become as much of a pastime as gaming itself.

UAE and KSA rank among the top 10 global markets for YouTube Gaming, in terms of awareness and engagement with the platform among gamers. This highly engaged gaming audience in the region presents a huge opportunity for game developers and console manufacturers. 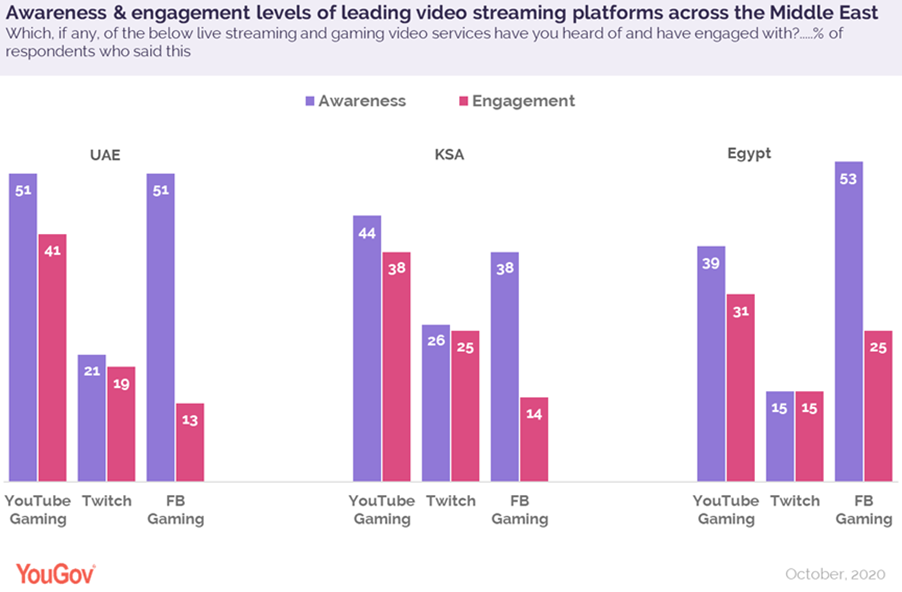 In KSA, Twitch enjoys a level of engagement that is equivalent to its level of general awareness among the gaming population in the country. Although Twitch has a wider familiarity in the western markets, when it comes to engagement with the platform- Saudi Arabia wins the worldwide race, along with Taiwan.

While Facebook Gaming is a relative newcomer to the space, more than half of the gamers in Egypt (53%) are familiar with this platform. Even though South East Asian countries are ahead of other markets in terms of awareness for Facebook Gaming, Egypt leads the global race when it comes to engagement with the platform (at 25%).

In the area of gaming, our data shows the highest percentage of gamers come from South East Asian countries, with Thailand (82%) and Philippines (80%) leading the pack. 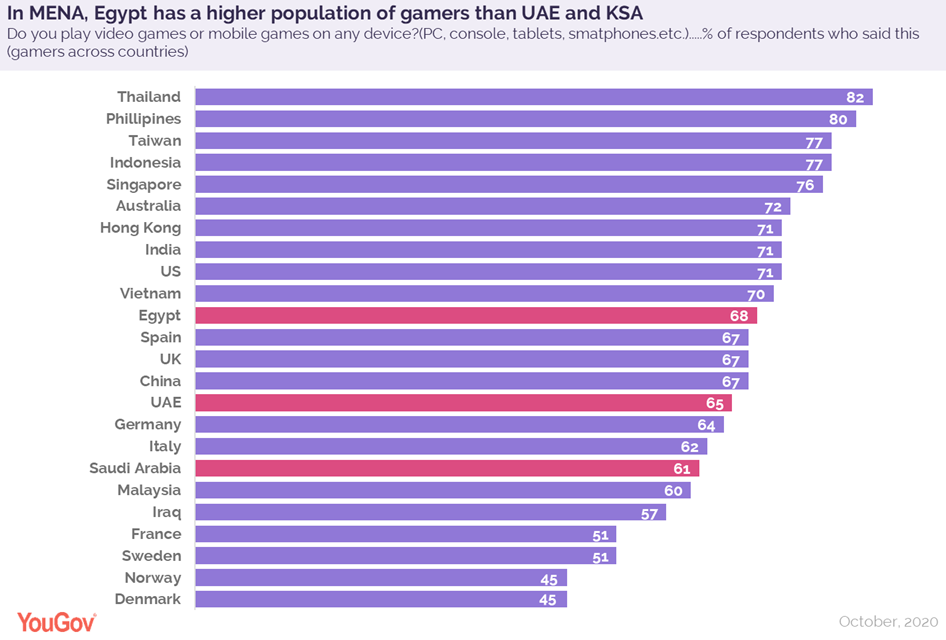 A majority of smartphone gamers in the UAE (79%), KSA (76%) and Egypt (73%) are light to regular players, playing games on their smartphones up to 10 hours a week. Only a small proportion in each country identified as heavy or intense gamers (playing for more than 10 hrs a week).

When it comes to esports, among the 24 surveyed markets, countries in the Middle East tend to be less familiar with esports, with lowest familiarity level in the UAE- at 26%.

Consumers in East Asia tend to have the greatest familiarity with it, with seven in ten people in China (72%), Taiwan (71%) and Hong Kong (70%) describing it correctly as ‘competitive video gaming, primarily in the form of organised/ professional events’. 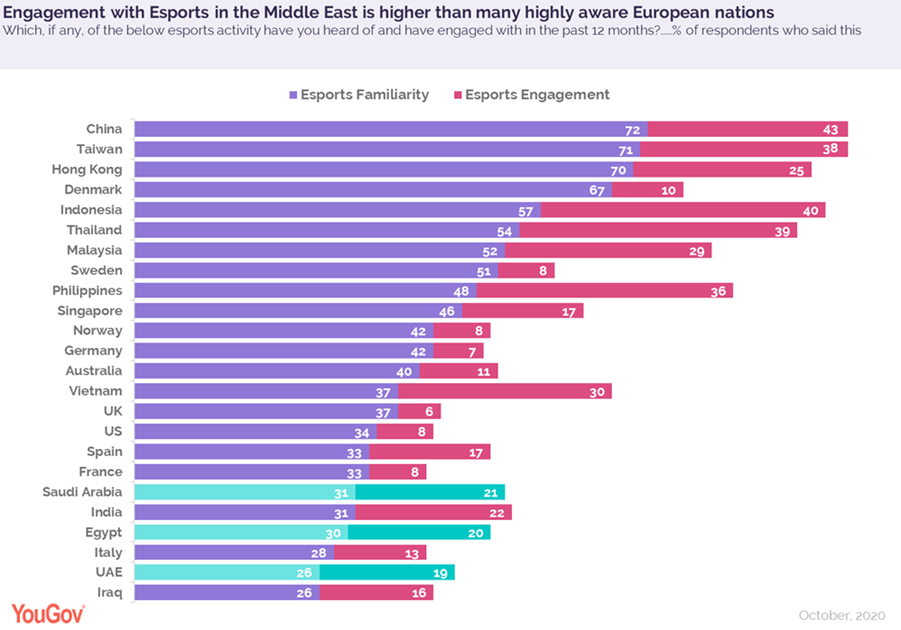 Even though familiarity with esports in the Middle Eastern markets is low, engagement is much higher than the highly aware western markets like US, the UK, and several European countries. This suggests residents are more likely to embrace these competitions, once they know more about them, hinting at a bright future for gaming & esports in the region.

Talking about the whitepaper, Nicole Pike, Global Sector Head of Esports & Gaming at YouGov, said, “This year the global video gaming industry has captured the attention of brands, marketers, and investors on a large scale. But this year has also highlighted just how quickly things can change in the gaming ecosystem, making it difficult for advertisers and sponsors to know if, when and how to spend wisely – and for gaming companies to determine how much more growth is on the horizon.

“YouGov is primed to play an important role in demystifying this industry for brands through data, which is why our first large-scale, global whitepaper on esports and gaming comes at the perfect time. Our breadth and depth of global tracking, profiling, and custom survey data is industry-leading, and I’m excited to showcase just how valuable the combination of daily performance tracking and nuanced analysis of the world’s gaming audience can be to stakeholders across the gaming ecosystem.

“This whitepaper offers a foundational understanding of gamers – which, given the number of countries, platforms, titles, streaming sites, and competitions at this audience’s fingertips is far from basic in today’s gaming landscape. Beyond our extensive industry expertise, we also explore key trends that will drive continued growth for gaming into 2021, all rooted in data from consumers around the world – the ultimate source of truth for understanding the next generation of gaming.”

***Results based on more than 27000 people surveyed on YouGov Omnibus across 24 countries, including around 3500 respondents from MENA.