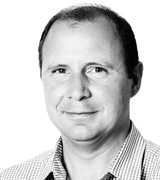 FIFA World Cup takes the top spot in YouGov Sport’s Global Buzz 2021 Rankings in the UAE, becoming the sports property with the most positive Buzz among residents in the country (32.2).

FIFA Club World Cup follows in the second place, with a Buzz score of 27.7. Although the event was postponed to 2021 due to the COVID-19 pandemic, it managed to create buzz among sports enthusiasts and landed a spot in the rankings.

YouGov SportsIndex measures the public’s perception of brands on a daily basis across a range of metrics. The rankings are based on the Buzz score from YouGov’s SportsIndex, which measures whether respondents have heard something positive or negative about a brand recently.

The past year has led to monumental disruption within the global sports and events sector. Nevertheless, even during these unprecedented times, the UAE served as an unparalleled sporting destination.

One of the most popular T20 cricket leagues, The Indian Premier League, took place in the UAE last year. The event created a lot of positive buzz among sports-starved residents, making it the third most popular event of 2020. 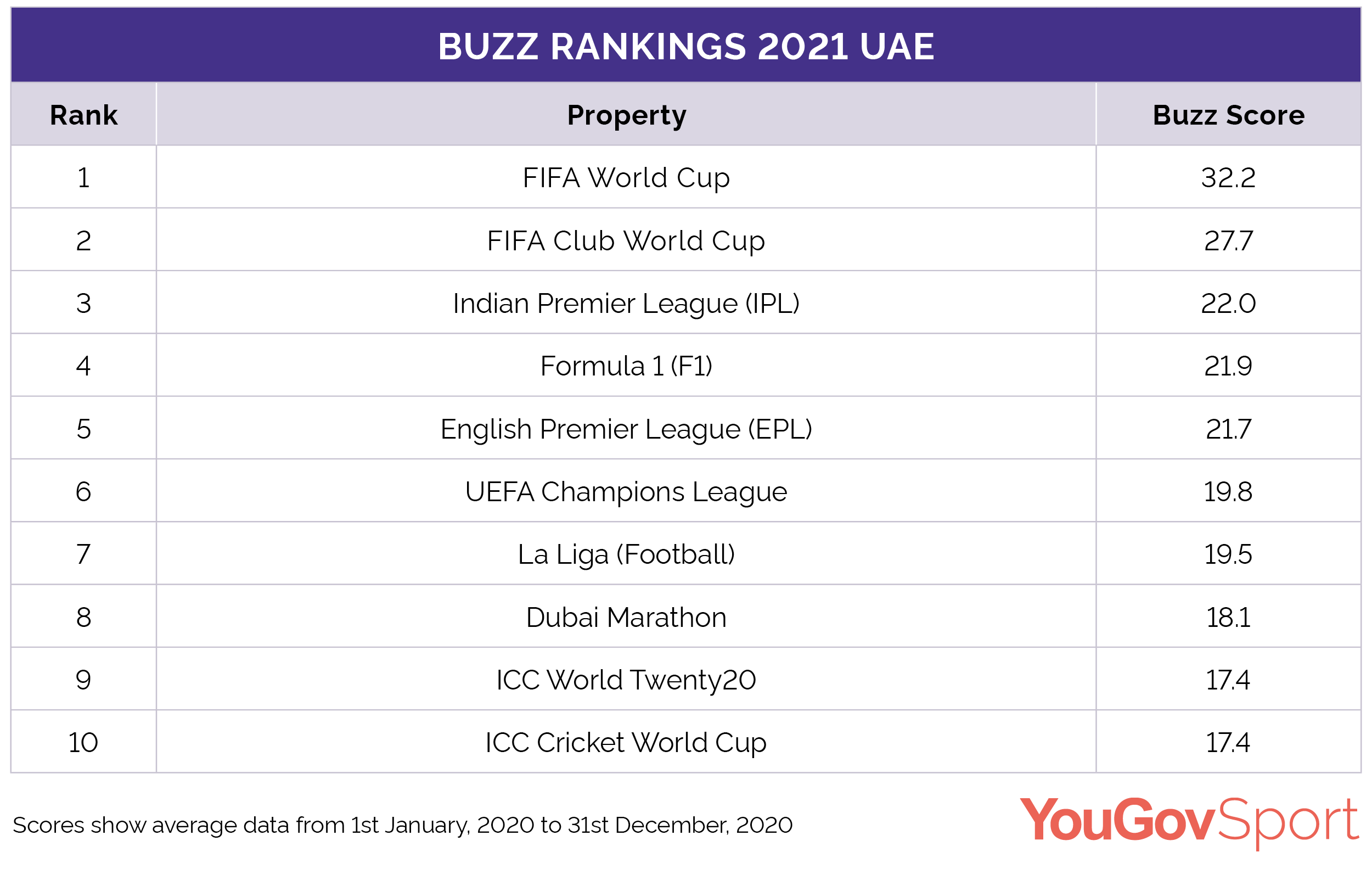 Two other cricket events- ICC World Twenty20 and the ICC Cricket World Cup also make an appearance in the list, taking the ninth and tenth position (17.4 each), respectively.

The 2020 Formula 1 Championship that ended in Abu Dhabi secured the fourth position in the top ten rankings (21.9).

The past year looked favorable for sports properties related to football. Major football championships like The English Premier League, UEFA Champions League and LA Liga appeared in the top ten list, at fifth (with a score of 21.7), sixth (19.8) and seventh (19.5), respectively.

Dubai’s obsession with health and fitness led the Dubai Marathon to land a place in the top ten rankings- at eighth (18.1). 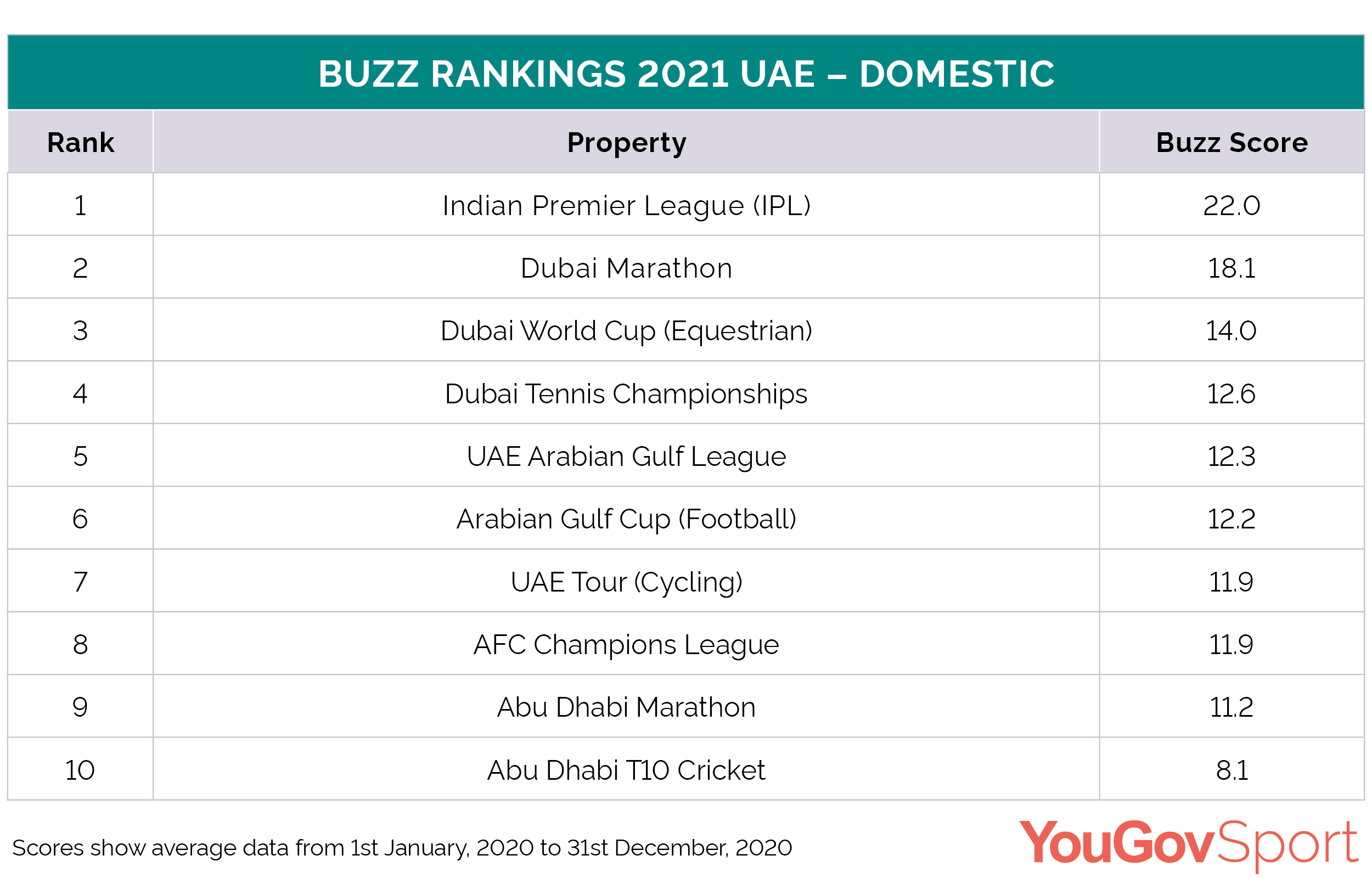 Of those properties which were held in the UAE, it’s the Indian Premier League which comes out on top with a score of 22.0 points. As we mention earlier, the event moved temporarily to the UAE in 2020 to avoid COVID restrictions and it looks like even if the move disappointed many Indians, it created plenty of noise in the UAE.

Dubai-based events then make up the next three highest properties. The Dubai Marathon, Dubai World Cup (equestrianism) and the Dubai Tennis Championships all make a splash with their annual events.

Talking about the YouGov Sport’s Global Buzz 2021 Rankings, Frank Saez of YouGov Sports said, “Across the globe, the world of sports had been hit hard by the pandemic, leading to the cancellation or postponement of major sporting events worldwide.

“However, the UAE witnessed a good year in terms of sports with the successful hosting of IPL 2020. Domestic events like the Dubai marathon also kept the buzz alive. However, football dominated the 2021 rankings, with five major tournaments featuring in the top ten list."

“With major global sporting events choosing the UAE as a venue as well as the return of live spectators, this could be a great opportunity for the UAE to reinforce its credentials as a global sports destination.”

SportsIndex is one of YouGov Sport’s signature capabilities. It operates in 33 markets across the world, tracking 200 key domestic and international properties across 30 sports.

In every market, it takes a list of the leading sports properties – a mix of domestic and international events, competitions and leagues – and, from 1.8m surveys annually, it measures the public’s perceptions of them.

Every day, and for every property on our list, we track 16 separate metrics, providing a treasure chest of data for sports marketers and administrators.

SportsIndex gives our clients the capability to do everything from measuring the effect of yesterday’s news headlines to establishing a season-on-season trend stretching back years. And because it operates internationally, users can track and compare properties across the world.

When combined with BrandIndex, which measures perceptions of more than 13,000 brands globally across 38 markets, you have one of the most powerful solutions in the sports world for informing strategy, finding partners and reacting to events.

The 2021 Buzz Report provides insight about all the sports events we monitor against just one of the 16 metrics we measure – ‘Buzz’.

“Over the PAST TWO WEEKS, which of the following sporting events have you heard something positive/negative about?”

From the answers we collect, we derive a Buzz score for each event.

Our Buzz score is the difference between the percentage of respondents hearing positive news and the percentage hearing negative news about an event in the previous two weeks. So, depending on what is going on, an event’s Buzz score can reveal whether conversations around a property are positive or negative at a point in time. Here is a graph charting the Buzz score for the FIFA Men’s World Cup over 2018 which shows how this metric can change over time.

For our Buzz rankings here, we look at the peak, average highest Buzz score each property has scored each calendar month. Then we take the highest of those twelve scores and compare them with highest monthly scores of every other property we track in that market. We track up to 80 properties in each market but for the sake of this report, we display only the top ten for 2020.