YouGov’s new research shows that almost six in ten (58%) UAE consumers are in favour of watching ads in exchange for free content.

Our data shows across the globe a plurality of consumers consider the bargain between consumers and advertisers – watching promotions in exchange for free content – to be a fair deal. 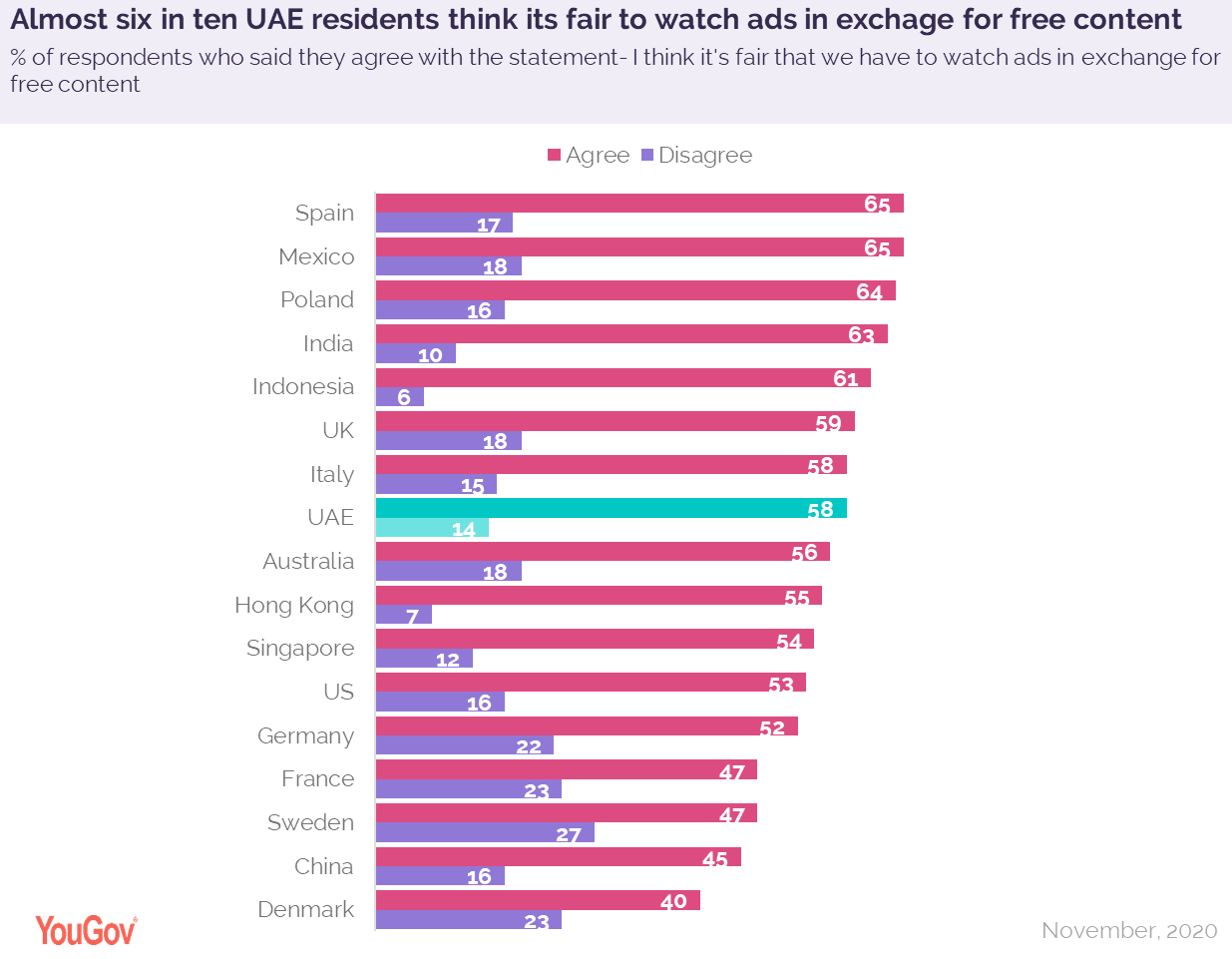 In the UAE, all age groups show a general acceptance towards viewing ads in exchange for free content, but the younger audiences (18-24 years) favour this trend the most (62%). 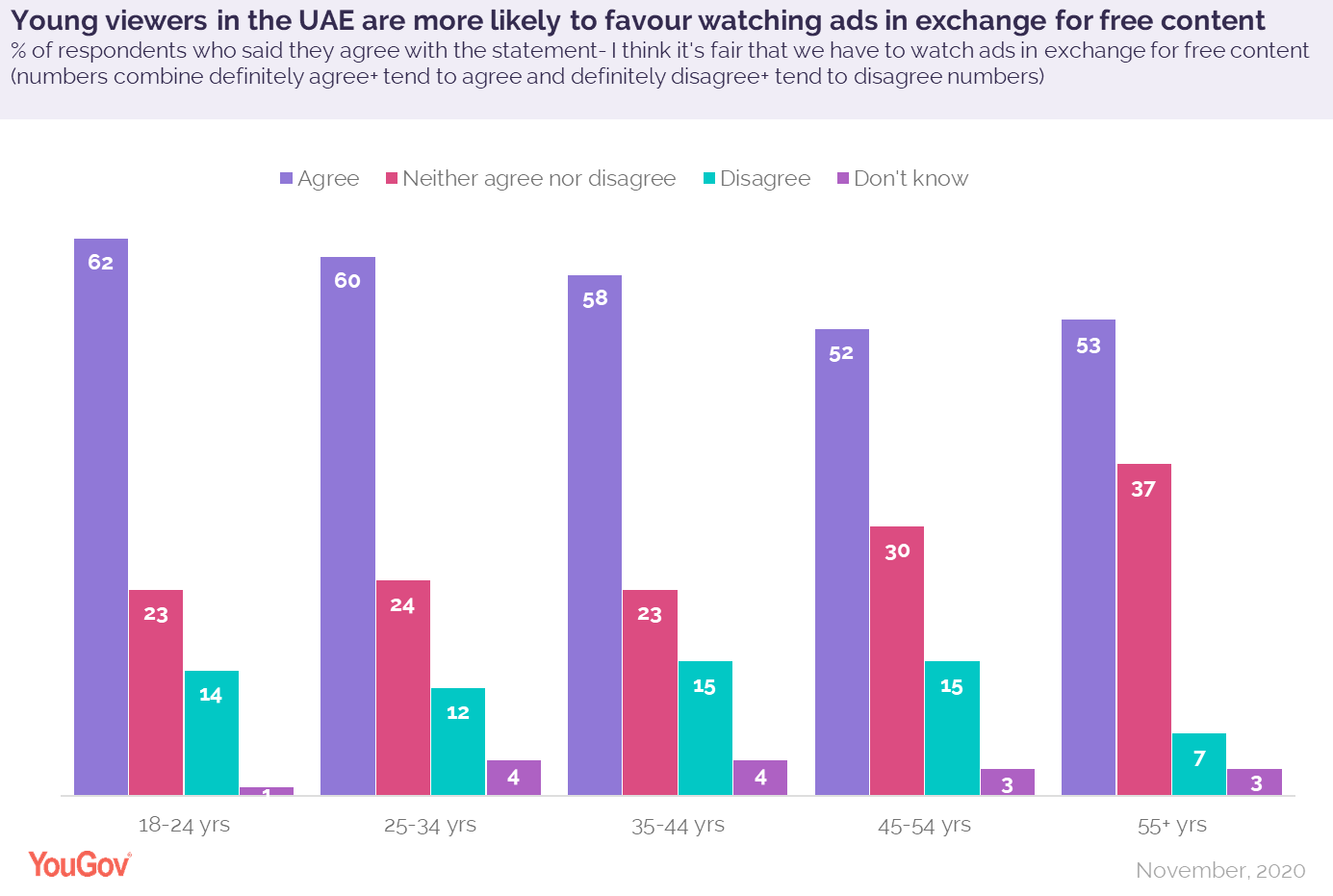 At a global level, Spain and Mexico are the top countries (65% each) where consumers are in support of this proposition. Whereas two Scandinavian countries, Sweden and Denmark, are most likely to dissent, but even in these markets, only around a quarter (27% Sweden; 23% Denmark) consider watching advertising in exchange for free-content to be unfair.

With a pandemic keeping more people indoors than ever before, digital media assumed greater importance as a means of keeping the public informed and entertained.

When UAE consumers were asked about the digital media channels they used in the past week, most people (61%) claimed to have watched video content online, followed by social media (53%) and messaging platforms like WhatsApp (46%).

Two in five indulged with live TV on digital devices, and almost as many used search engines (40% and 37% respectively). The consumption of radio, podcasts and audio books remained lower than the other formats. 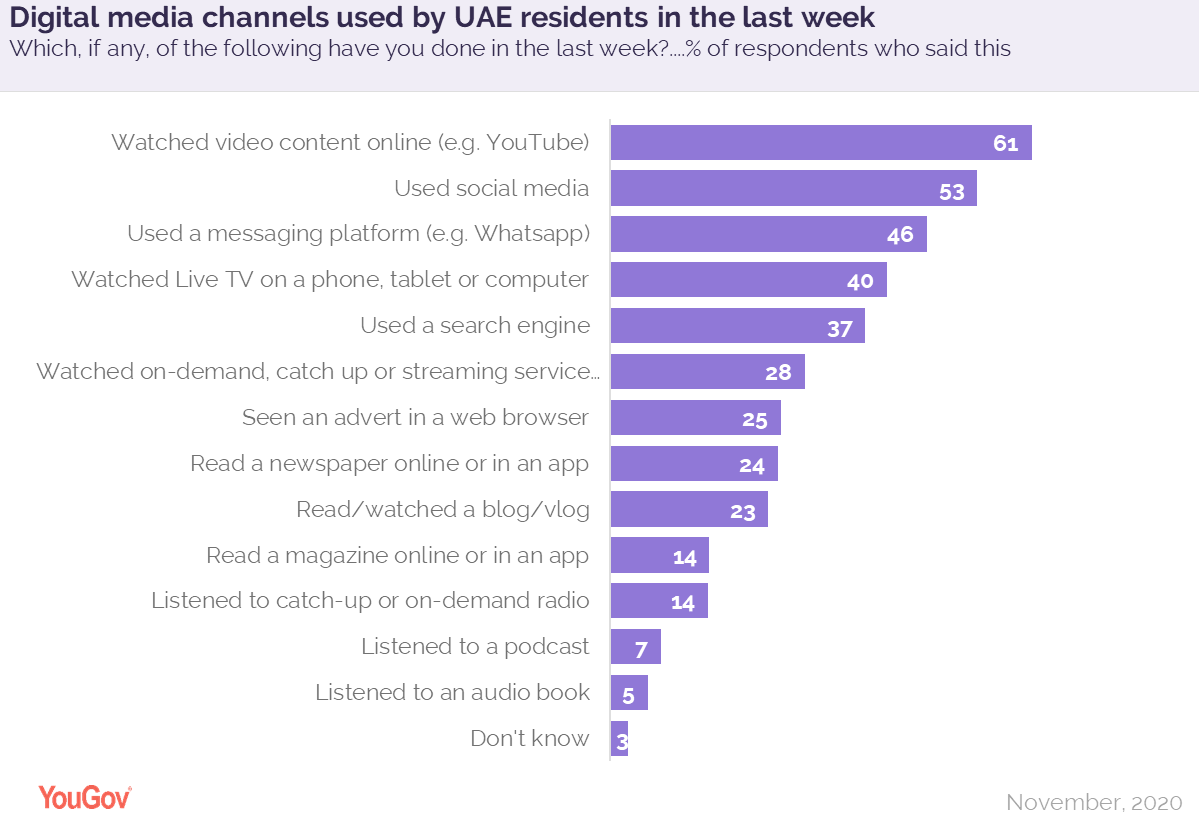 Among traditional media channels, TV was the most consumed medium (at 62%) by UAE residents in the week before we asked this question. Radio (36%) and outdoor advertising (32%) followed next, but there is a considerable consumption gap between TV and the other two mediums.

At a worldwide level, live TV seems to be popular globally, with the highest consumption seen in European countries like France (79%) and Italy (77%). UAE (35%) and China (38%) are the only exceptions where the popularity of this medium is one of the lowest across all markets.

Talking about the International Media Consumption Report 2021, Julian Newby, Sector Head of Media at YouGov said, “COVID-19 has significantly impacted consumer behaviour and, in turn, media consumption habits globally. The data shows that although many people engaged with digital media during the pandemic, several traditional mediums remained as relevant as before. Our data shows there are huge challenges for brands and advertisers looking to achieve ROI and effectively reach consumers in the right channels, at the right time, with the right message. Reliable, up-to-date insight can provide an early window into behaviour change to inform effective media planning and campaign development.”