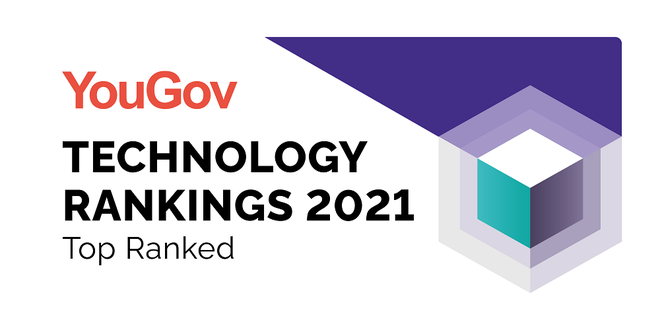 by
Bhawna Singh
in
Digital & technology

YouGov’s Technology Rankings 2021 MENA reveal Apple, Google and WhatsApp are the brands with the most positive impression among consumers in UAE, Saudi Arabia and Egypt.

These rankings are calculated using data we collect from members of the public around the globe every day, for our BrandIndex tool. The brands in the YouGov Technology Rankings 2021 were ranked based on a 12-month average Impression score - a net measure of whether a consumer has a positive or negative impression of a brand.

The UAE top 10 list is led by WhatsApp (Impression score of 54.5). Despite facing a tough year with regulatory and reputational challenges around the world, the instant-messaging giant maintains its positive impression among consumers in the UAE, securing the top spot in the rankings. 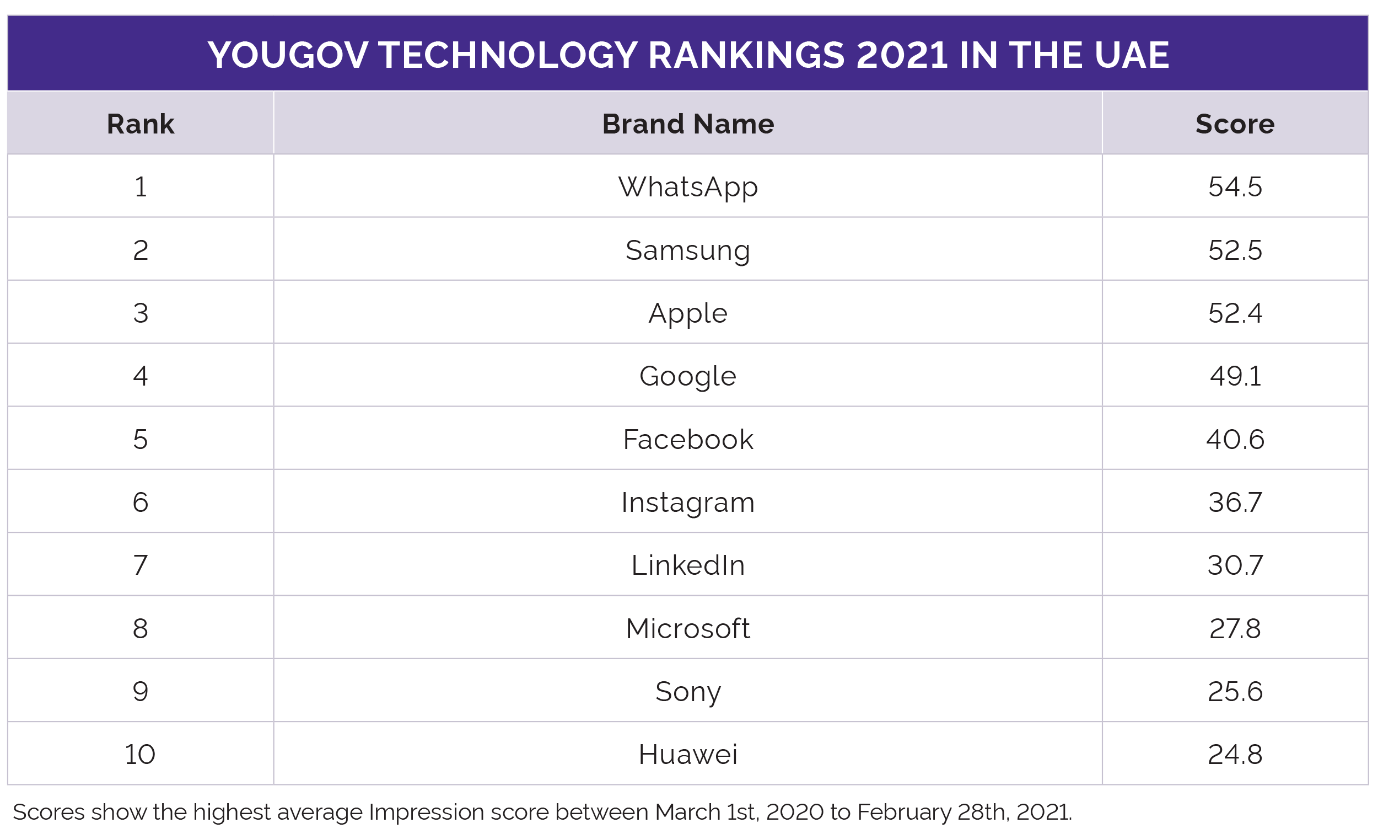 Along with WhatsApp, several other leading internet and social media brands feature in the list.  Facebook secures a spot in fifth (40.6), followed by Instagram and LinkedIn- at sixth (36.7) and seventh (30.7), respectively.

Global technology company Apple tops the rankings in Saudi Arabia. The past twelve months saw a host of new launches from the brand, making it the tech brand with the most positive impression (46.6) among consumers in KSA. 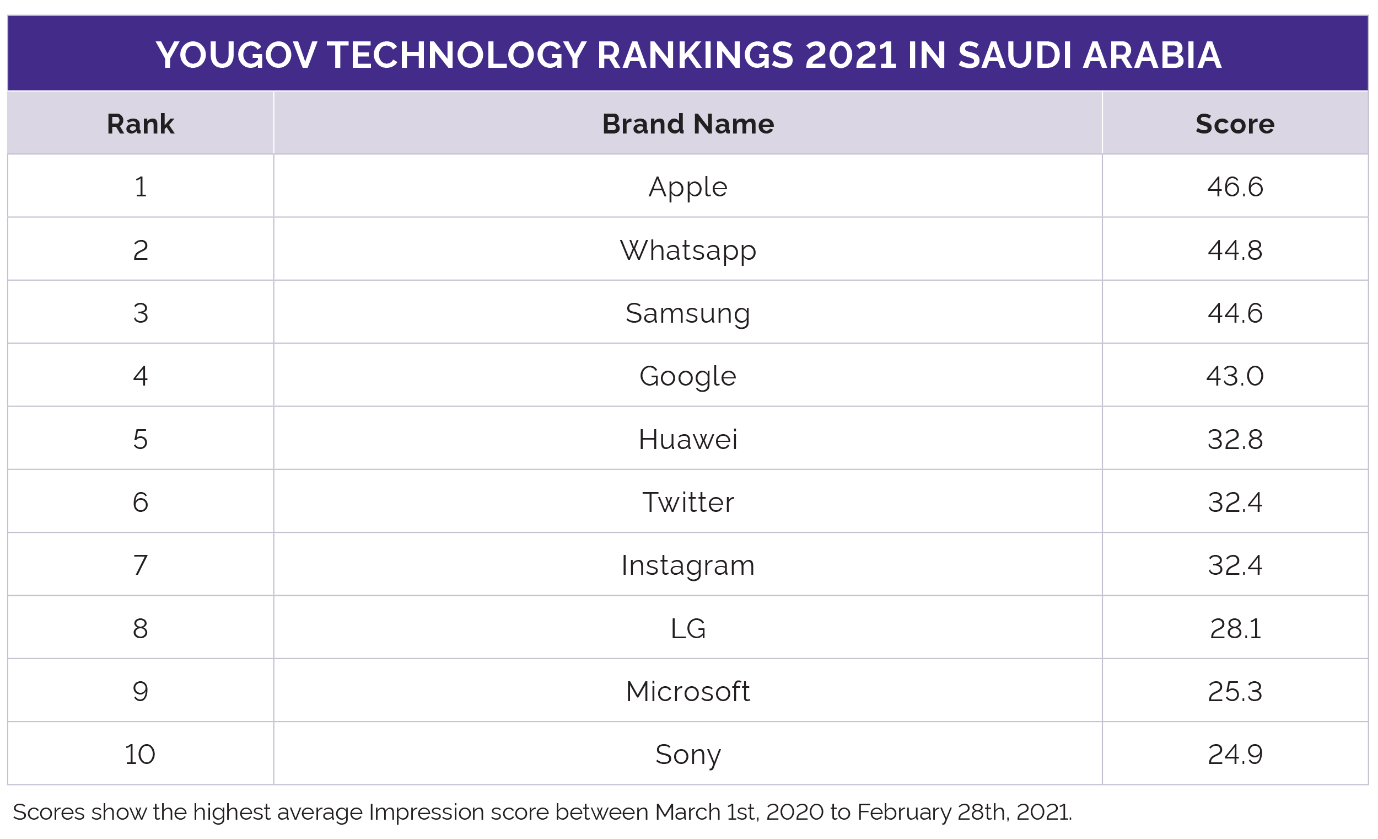 Despite a challenging past year globally over a diplomatic row, Huawei manages to maintain a positive impression among KSA residents, parking itself in fifth (32.8) in the 2021 KSA rankings. 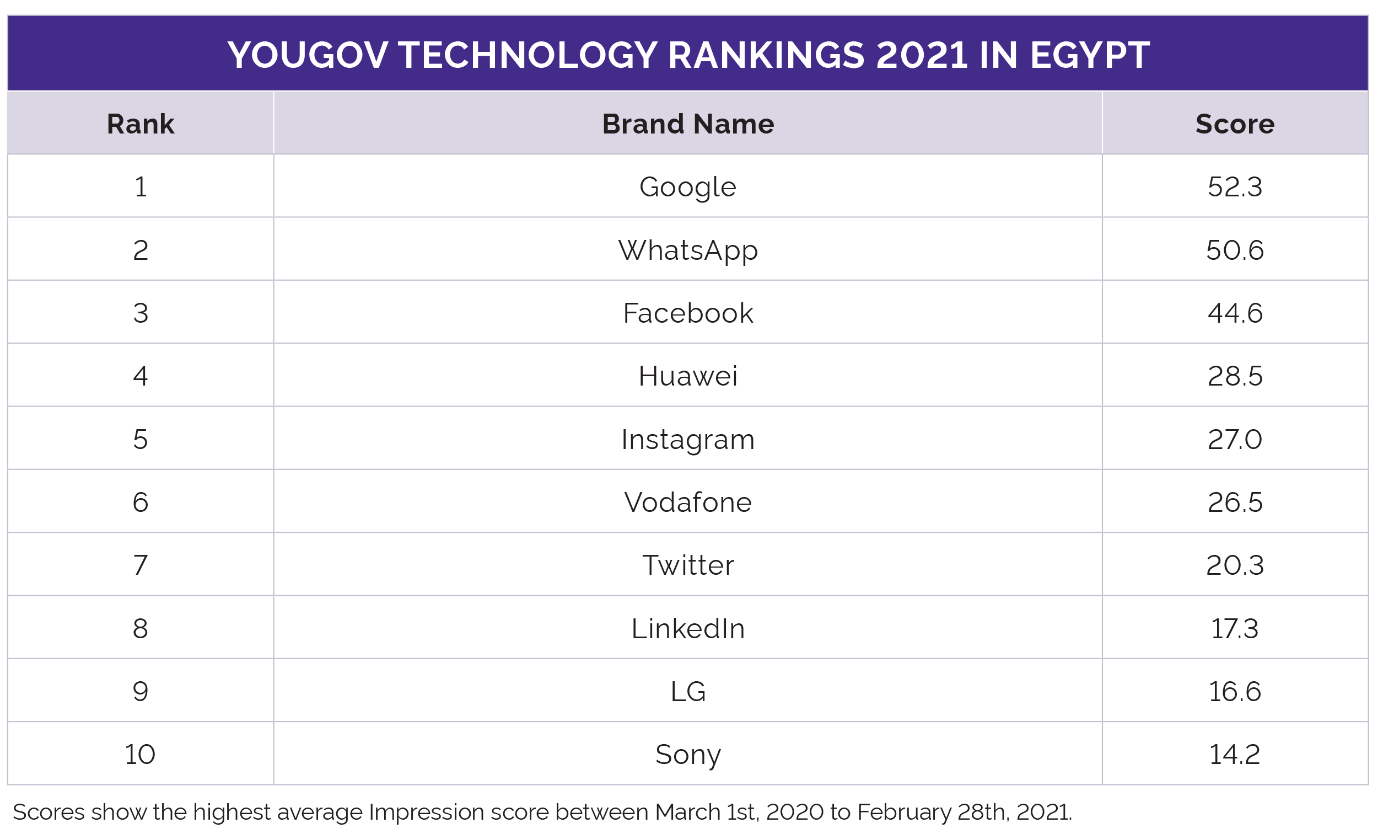 Apple secures a spot at number 5 as do Chinese tech brands Huawei and Oppo- at number 10 and 25, respectively.

Some other familiar brands to make it into the global top 25 include Panasonic, LG, Bosch, Philips, Sony, Microsoft, Siemens, HP and Yahoo!. 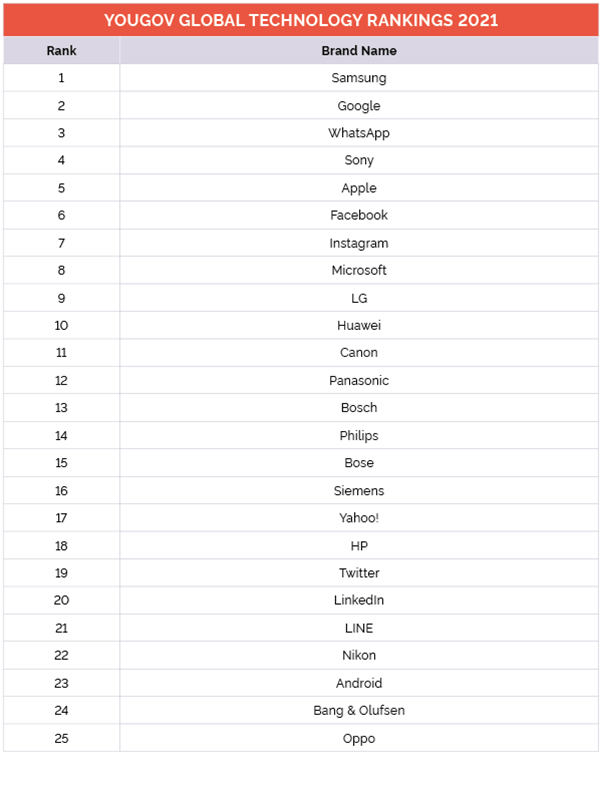 To see your impression ranking please complete the form here and one of our experts will be in touch.

Want to see how other markets compare? Download the full rankings lists for all markets which highlight the top 10 most-favoured consumer technology brands across 24 markets and a deeper dive into the global list. Click here to get your copy.

Methodology: The brands in the YouGov Technology Rankings 2021 were ranked based on the Impression score, which is a measure of whether a consumer has a positive or negative impression of a brand calculated by taking the average over a period of 12 months.

The rankings chart shows the brands with the highest average Impression score between March 1, 2020 to February 28, 2021. The scores are representative of the general population of adults 18 and over (some are online representative).

All Impression scores listed have been rounded to a single decimal place; however, we have used additional precision to assign ranks. All brands have been tracked for at least six months to be included in the rankings.

Where brands are tracked in more than one sector within one market, we have taken the average Impression score.

The categories we have included in the YouGov Technology Rankings 2021 are:

In most cases, only master brands have been included within the rankings. The exception to this rule is the inclusion of Instagram and WhatsApp where it may not be widely known by the public that Facebook is the parent company of these brands.

The categories we have excluded from the Technology Rankings are:

*Amazon has not been included in the YouGov Technology Rankings as this brand will be included within the YouGov Retail Rankings in line with the primary sector tracked for the master brand in BrandIndex.

The above categories will feature in the relevant, subsequent YouGov sector rankings.