While the term ‘Corona’ isn’t likely to evoke any sweet sentiments at the first instance for obvious reasons, the oldest confectionery and chocolate company in Egypt that goes by that very name has managed to boost its Ad Awareness scores.

Established under the Royal Chocolate Works of Egypt, this brand has managed to shoot up its popularity amongst Egyptians with innovative ads and social media posts. Data from YouGov’s brand health tracker BrandIndex reveals the success of the campaign’s impact.

The Ad Awareness scores, which shows the percentage of adults in Egypt who had seen an ad for the brand, has shot up 10 points from 11% on March 1 to 22% on March 31. 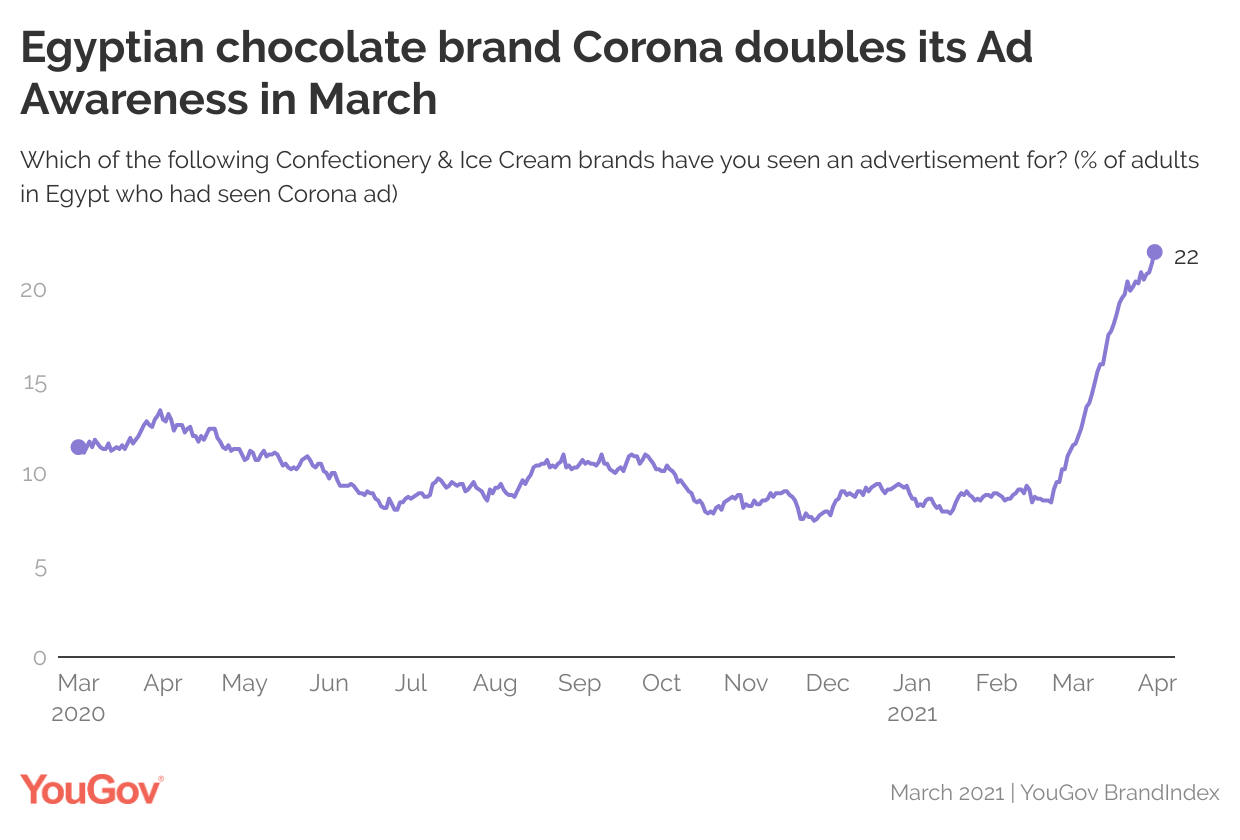 In mid-February, Corona Chocolates released an ad introducing various flavours. The video is a concoction of the era in 60s and 70s along with the present-day. The ad employed a minimalist theme using mild pastel hues in the background, costumes with a peculiar music score helping the video grab immense attention. It crossed two million views on both of Corona’s official handles on Facebook and YouTube.

After the video launch, Corona used portions of the video to create witty memes relatable to various household situations. The campaign signified the long-time standing of the brand in the Egyptian market. Along with that, the brand conveyed its adaptability to new trends and variety resonating across generations.

Touching the 60s and 70s theme in the ad have indeed been helpful for the confectionary brand making it popular amongst the Baby Boomers. BrandIndex shows that of those who had seen the ad, 35% belong to the age group of '45 and above' while 23% are Millennials and 17% are Gen Z.

In the same month last year, the percentage of adults in Egypt who saw the Corona Chocolate ad was 11%. The Ad Awareness slipped to as low as 7% in November 2020 and fluttered between 7-11% until February 2021. After the campaign was set in motion, Corona’s Ad Awareness shot up from 11% to 22% in just four weeks.

Indeed, Corona Chocolates made a stellar comeback in the chocolate market which saw a 10-11% decline last year in Egypt. The advertisement marks the brand’s return not only in Egypt but also other Arab and African market after eight years.

YouGov BrandIndex collects data on thousands of brands every day. Corona’s d Awareness score is based on the question: Which of the following Confectionery & Ice Cream brands have you seen an advertisement for? and delivered as a net score of 22%. Scores are based on an average daily sample size of 1,300 adults in the US between March 2020 to March 2021. Figures are based on a 4-week moving average. Learn more about BrandIndex.