Emirates tops YouGov’s 2021 Best Brand Rankings in the UAE for the fifth year in succession (58.1). Despite the flight restrictions in place for an extended period, the airline maintains its strong perceptions among UAE residents allowing it to maintain 1st rank in the UAE despite recording a decline of -1.8 in its year-on-year brand health score.

The rankings are based on the Index score from YouGov BrandIndex, which is a measure of overall brand health that indicates how well a brand is delivering against its brand promise on key attributes and is calculated by taking the average of the Impression, Quality, Value, Satisfaction, Recommend and Reputation scores collected in BrandIndex. 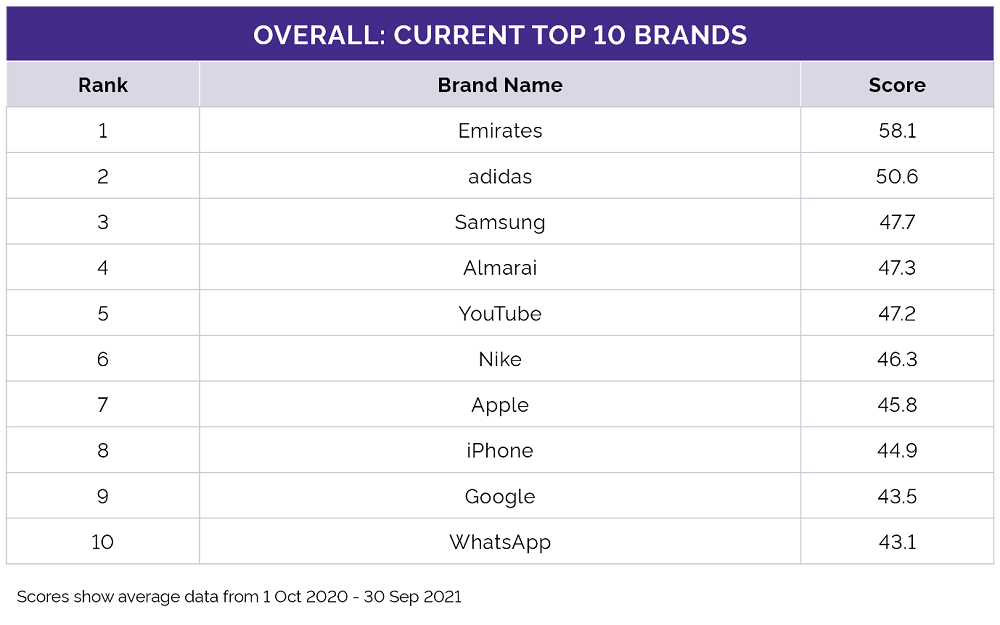 Both Adidas and Nike make a new entry into the top ten list in second (50.6) and sixth (46.3) respectively.

Samsung moves up two places to third (47.7) despite its own brand health declining by -0.8 points from the same time last year. On the other hand, dairy giant Almarai moved up four places to fourth (47.3), strengthening its brand perception over the past year.

Global technology platform brands including YouTube, Google, and WhatsApp have witnessed declines in their scores, and they have all moved down the top 10 list. YouTube moved down two places to fifth (47.2), Google down three places to ninth (43.5), and WhatsApp moved down eight places to tenth (43.1) in this year’s rankings.

The rankings also show the brands which have improved the most over the past 12 months. Noon.com is the most improved brand of the year, with a change in score of +6.2. 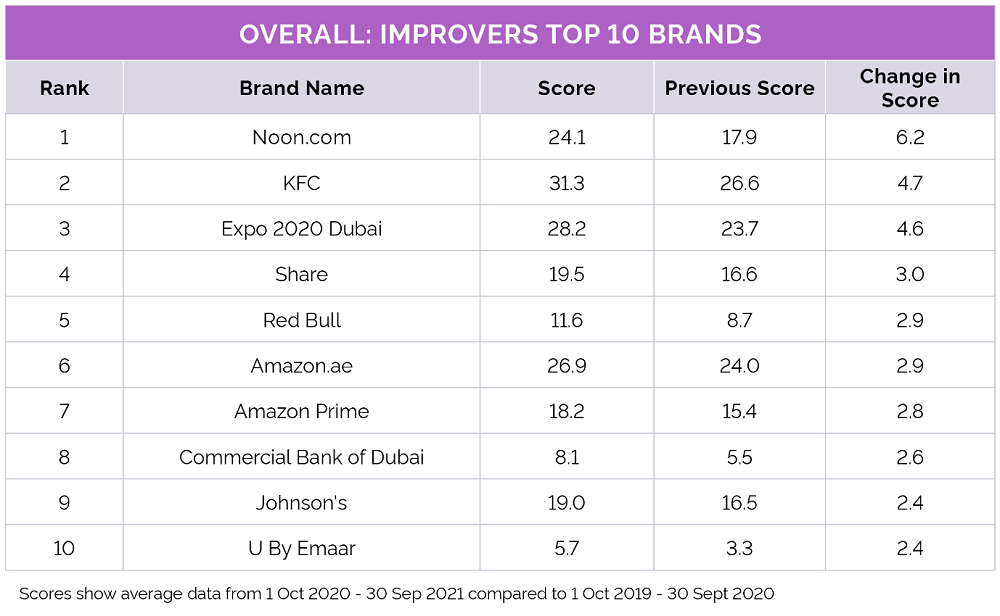 Another e-commerce giant to feature in the improvers list is Amazon.ae (+2.9), along with Amazon’s video-on-demand streaming service Amazon Prime (+2.8).

The brands in YouGov Annual Rankings were ranked based on the Index score, which is a measure of overall brand health calculated by taking the average of Impression, Quality, Value, Satisfaction, Recommend and Reputation scores for the full year.

The Index Rankings chart shows the brands with the highest average Index scores between October 1, 2020 and September 30, 2021. The Index Improvers chart ranks the brands with the highest increase in Index, comparing scores from the previous 12-month period. To be included in the improver list, the variance must be positive. Both scores are representative of the general population of adults 18+ (some are online representative).

All Index scores listed have been rounded to a single decimal place; however, we have used additional precision to assign ranks.