The Summer Olympics dethroned its nearest rival FIFA World Cup in YouGov’s 2022 Sports Buzz Rankings in the UAE to become the sports property with the most positive Buzz among the residents in the country (39.9). The quadrennial mega-event outscored the FIFA World Cup (which now holds the second position with a buzz score of 33.6) by more than six points.

YouGov SportsIndex measures the public’s perception of sports brands on a daily basis across a range of metrics. The rankings in YouGov’s 2022 Buzz Report are based on the Buzz scores, which measures whether respondents have heard something positive or negative about a brand recently. 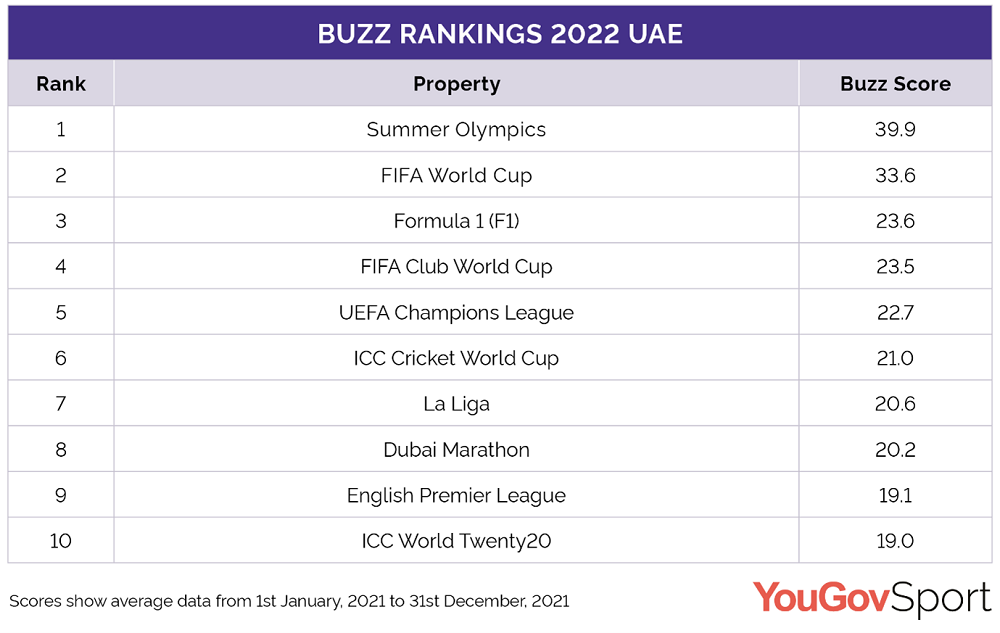 Formula 1 makes a strong showing to appear in third place (23.6) in our ranking. The Abu Dhabi Grand Prix, which took place in December, was the deciding race for both the drivers’ and the constructors’ championships. The winners were eventually determined by a finish which saw Max Verstappen overtake challenger Lewis Hamilton on the final lap in some hotly disputed circumstances.

The FIFA Club World Cup is placed fourth (23.5) in our ranking this year, losing out on third by just a tenth of a point. The event was earlier scheduled to take place in Japan in 2021, had to be shifted due to the Covid restrictions there, and is now finally happening in the UAE in Feb 2022.

The past year also looked favorable for other football-related sports properties. The UEFA Champions League climbs up one place to take the fifth position, recording a change in score of +2.9. LA Liga takes the seventh (20.6) place, while the English Premier League makes a new entry at ninth (19.1).

Besides football, cricket leagues have also featured prominently in this year’s rankings. ICC Cricket World Cup appears at sixth (21.0) and ICC World Twenty20, which took place in the UAE, occupies the tenth (19.0) place. Unfortunately, the Indian Premier League did not make it to the top ten in 2021 (it came top in 2020), even though part of the event was again hosted in the UAE following COVID outbreaks in India.

Finally, the Dubai Marathon remains in the eighth position (20.2) as last year and completes the top ten list in the UAE.

SportsIndex is one of YouGov Sport’s signature tools. It operates in 35 markets around the world, tracking 200 key domestic and international competitions across more than 30 sports.  A core of 21 properties is tracked in every market, allowing for international comparison. Many other events, leagues, and tournaments appear in multiple markets; while some competitions are tracked only in the country which hosts them.

In every market, YouGov takes a list of the leading sports properties – a mix of domestic and international events, competitions, and leagues – and, based on 700,000 surveys annually, measures the public’s perceptions of them.

Every day, and for every property on our list, we track 16 separate brand metrics, providing a treasure chest of data for sports marketers and administrators.

SportsIndex gives our clients the capability to do everything from measuring the effect of yesterday’s news headlines to establishing a season-on-season trend stretching back years. And because it operates internationally, users can track and compare properties across the world.

The 2022 Buzz Report provides insight into all the sports events we monitor against just one of the 16 metrics we measure – ‘Buzz’.

Every day, we ask 100 people these questions...

From the answers we collect, we derive a Buzz score for each event.

Our Buzz score is the difference between the percentage of respondents hearing positive news and the percentage hearing negative news about an event in the previous two weeks. So, depending on what is going on, an event’s Buzz score can reveal whether conversations around a property are positive or negative at a point in time. Here is a graph charting the US Buzz score for the FIFA Women’s World Cup over 2018 which shows how this metric can change over time. 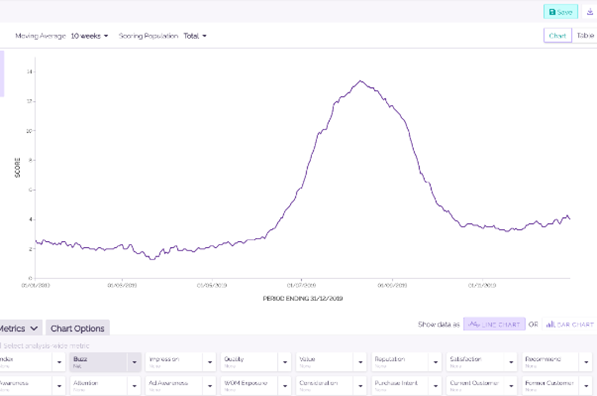 For our Buzz rankings here, we look at the highest average Buzz score each property has scored each calendar month. Then we take the highest of those twelve scores and compare them with the highest monthly scores of every other property we track in that market. We track up to 80 properties in each country but for the sake of this report, we display only the top ten in each market overall (typically a mix of domestic and international). In addition, we show a top five or top ten ranking for each market for those competitions hosted or held (in part or in their entirety) in each market over the year.