Tech giant Google dethroned WhatsApp to become the top brand in YouGov’s Best Buzz Rankings 2021 in Egypt (40.1). WhatsApp, which held the top spot for two consecutive years (in 2018 and 2019), faced a tough year with the global backlash to concerns of data sharing with parent company Facebook, which may have contributed to it dropping out of the 2021 top ten list in Egypt.

YouGov’s BrandIndex measures the public’s perception of brands on a daily basis across a range of metrics. The annual Buzz rankings are compiled using Buzz scores from the entire years’ worth of data. Buzz scores measure whether people have heard anything positive or negative about a brand during the previous two weeks and the scores are reported as NET scores. 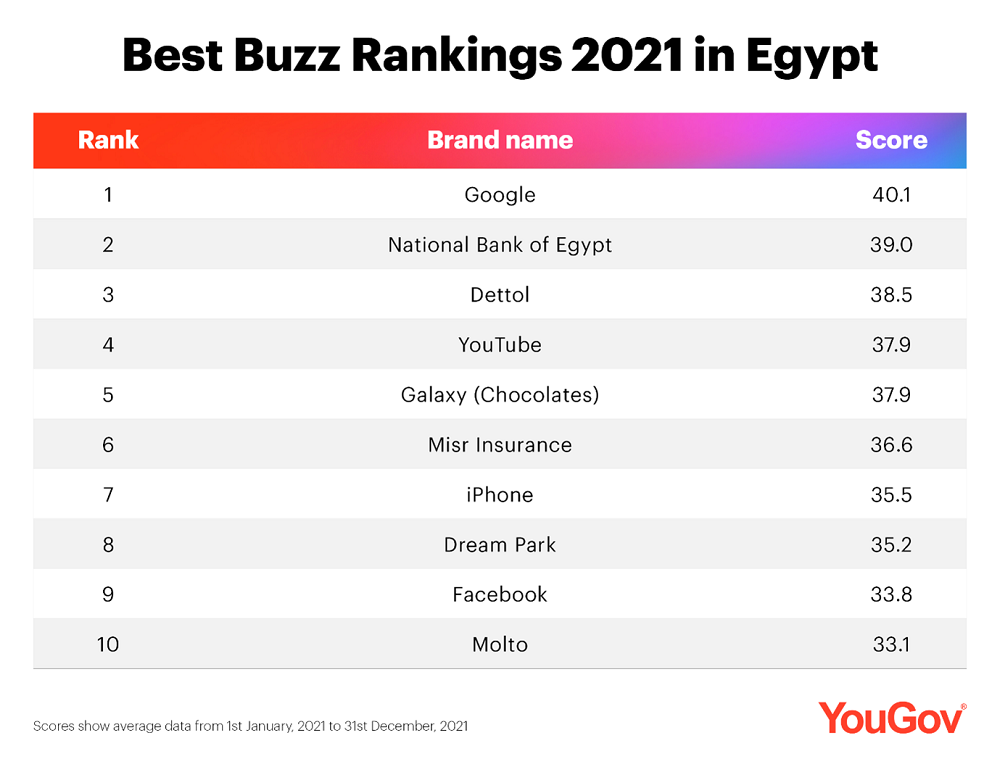 National Bank of Egypt made impressive gains in terms of its net positive Buzz, moving up five places to second with a score of +39.0.

Global hygiene brand Dettol (38.5) along with Misr Insurance (36.6) and Dream Park (35.2) made a new entry in this year’s list, appearing in third, sixth and eighth place, respectively.

Residents of Egypt continued to hear positive things about loved chocolate and snack brands with Galaxy (Chocolates) retaining its fifth position (37.9) and Molto (33.1) taking the tenth spot and completing the top ten list in Egypt.

The rankings also show the brands that have improved the most over the past 12 months. Dream Park is the most improved brand of the past year, with a change in score of +5.8. Despite the pandemic, Egypt's biggest amusement park continued appealing to residents, securing a spot in the top ten rankings as well as the top place in the improvers’ list. 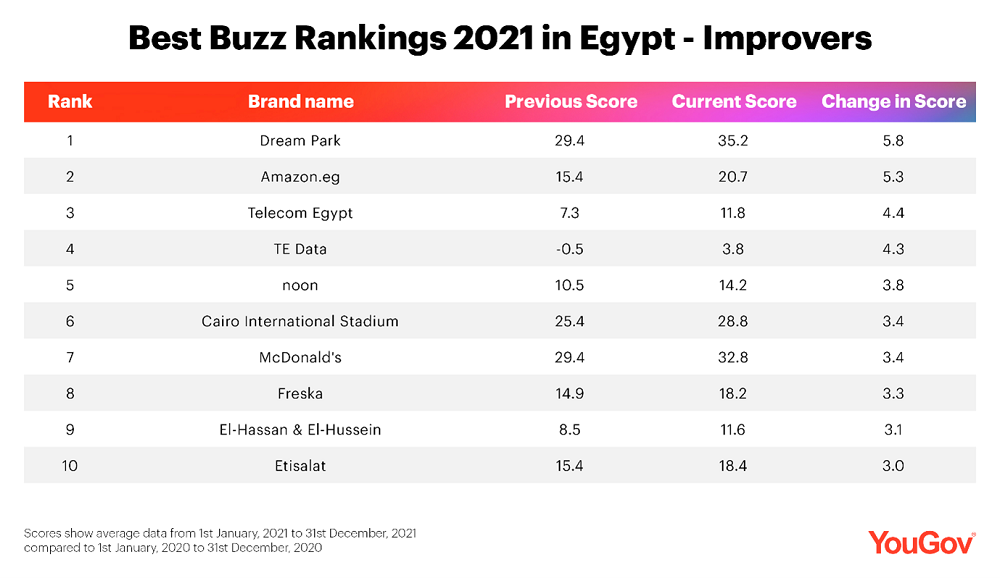 After acquiring Souq and launching its own platform in Egypt in 2021, Amazon.ae noted great improvements to its Buzz scores (change in score of +5.3) and is the second-best improver in Egypt.

Telecom giants Telecom Egypt (4.4) and Etisalat (3.0) also feature in the list- in third and tenth, respectively.

The brands in YouGov Best Buzz Rankings 2021 were ranked based on the Buzz score, which asks respondents, “If you've heard anything about the brand in the last two weeks, through advertising, news or word of mouth, was it positive or negative?” Scores are net scores, calculated by subtracting the percentage of negative responses from the percentage of positive responses for each brand.