Dubai’s flag-carrier airline Emirates tops YouGov Travel and Tourism Rankings 2022 in the UAE, receiving the highest Impression score of +63.3 among the residents in the country. Last year, during the summer months when many destinations eased their travel restrictions, Emirates responded to the strong travel demands by ramping up its route to 90% of pre-pandemic coverage. Additionally, the continued emphasis on health and safety measures as well as making the process as contactless as possible with minimal interaction with people, together with the extension of Tier status deadlines by one year were all very well received by the public, contributing to the brand’s strong overall impression among the UAE residents.

YouGov’s BrandIndex measures the public’s perception of brands on a daily basis across a range of metrics. The Rankings were compiled using the Impression score, which is a measure of whether a consumer has a positive or negative impression of a brand calculated by taking the average net score for the year 2021 (1st January 2021 – 31st December 2021). 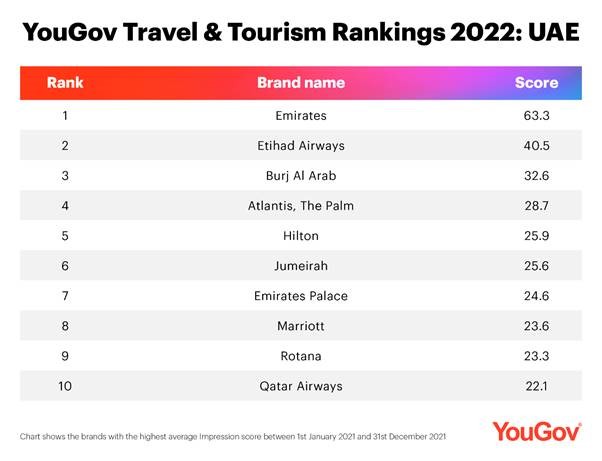 Emirates’ rival Etihad Airways is in second place with an Impression score of +40.5, while another popular airline Qatar Airways takes tenth (22.1) place in the rankings.

The rest of the list is dominated by Hotels & Resort brands. Dubai's most iconic hotel Burj Al Arab is placed third (+32.6). Last year, for the first time, the hotel opened its doors to non-guests (residents and tourists) to discover its most prestigious and inaccessible spaces, which might have helped the brand create a stronger positive impression among the people in UAE.

YouGov also revealed the top 5 brands that made the largest improvement to their Impression scores over the past 12 months. Along with featuring in the 2022 UAE’s top ten list, Qatar Airways is also the most improved brand of the past year with a change in score of +5.1 (going from an Impression score of 17.0 in 2020 to 22.1 in 2021).

The improvers list in UAE is mostly dominated by airlines. Along with Qatar Airways, Middle East’s low-cost carriers, flydubai and Air Arabia (both with ever-expanding routes), as well as Hong Kong’s flag carrier Cathay Pacific Airways, also feature as the most improved brands of the past year, securing the second (change in score of +2.5), third (+1.1) and fifth (+0.5) place, respectively.

Finally, completing the list of top five improvers in UAE is Hotel & Resort brand Hilton in fourth, with a change of score of +0.8.

All scores listed have been rounded to a single decimal place; however, we have used additional precision to assign ranks. All brands must be tracked for at least six months to be included in either ranking.